Kyrgios after his victory over Krajinovic: "I just wanted to, I don't know, just prove to people that, like, I'm really good. I feel like I just don't have the respect sometimes, you know?"

Nick Kyrgios labelled himself one of the "most important people" in tennis as he set out to "remind everyone" of his talent with a dominant victory over Filip Krajinovic in the second round at Wimbledon on Thursday.

A 6-2 6-3 6-1 win saw the Australian set up an enthralling third-round encounter against Stefanos Tsitsipas amid heightened scrutiny in the wake of Kyrgios spitting towards a spectator during his first-round triumph against Paul Jubb.

The 2014 Wimbledon quarter-finalist was fined $10,000 for unsportsmanlike conduct, the largest of the penalties announced so far at the tournament.

"Some people, like, love to just tear me down. It's just not possible anymore," he had told reporters before the fine was issued.

"I just want to give people who watch this press conference or watch my tennis to just believe in yourself, be yourself, don't be someone else up here either. Don't just say what you've been told to say.

"I couldn't care less if there is an investigation about me doing that, to be brutally honest with you. I know what I bring to the sport. One of the most important people in the sport. Do you want to speak about that? Nothing to investigate there because it's just factual.

"I'm extremely confident in myself. All the challenges I've overcome in my life. Proud to be up here and doing it my own way. Being able to produce tennis like that at Wimbledon, it's a dream come true for any tennis player."

Kyrgios let his skill with racket in hand lead the way against Krajinovic as he admitted the aftermath of his win over Jubb had left him "locked-in" ahead of the match.

"Well, I didn't want to remind people that I'm good; I know that I'm good," he continued. "I just feel like people just don't give me the respect sometimes because of other things that I do.

"There was just nothing the media possibly could tell me I did wrong today. I just know that you can't possibly ask me anything and stir anything up. And I love it because then you can't write anything. What are you going to say? Nothing today. Dumbfounded all of you.

"Today from the get-go, I just felt really good. From the back of the court I felt like I really returned well. I was just very just locked in from the get-go today.

"I just wanted to, I don't know, just prove to people that, like, I'm really good. I feel like I just don't have the respect sometimes, you know?" 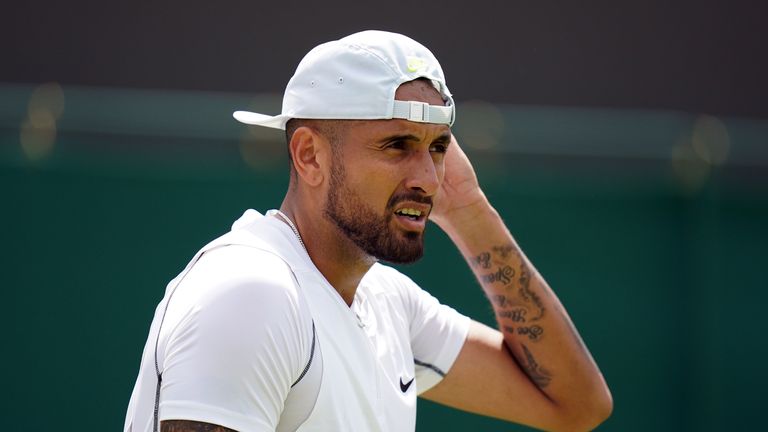 Jacquie Beltrao says Nick Kyrgios admitted spitting in the direction of an abusive fan during his Wimbledon first round win and questioned a line judge he described as 'an old man'.

Kyrgios had been critical of the behaviours of certain spectators during his clash with Jubb, but explained on Thursday that he welcomes fiery crowd atmospheres in tennis.

"I don't mind when crowds get up and about and support. Obviously if there's a wild card, and they're locals, they want to see their countrymen do well. I'm all for that," he said. "I'm all for fans to be as loud as they want. But just there's a line I think of disrespect where this is not acceptable in any sport.

"But I think rowdiness and loudness and atmosphere is what's beautiful about this sport. It's like one-on-one without the contact. You're playing in some of the great stadiums in the world.

"I think Jubb would have loved that atmosphere out there. He'll remember that. So much room to learn. Next time he's in that, he might come through with a win.

"I think for all these locals that are wild cards, I was once there. I loved the crowd. It's something I never forgot. Just the way I learnt how to deal with those emotions, the roller-coaster ride, it's good for the sport I think.

"I think the sport needs it in a way. You look at all the other sports around the world, so entertaining to watch. Tennis I think needs a bit more interaction from the crowd. It's got to be within the lines, I think."

It was announced on Thursday that Kyrgios and Thanasi Kokkinakis had withdrawn from the doubles event in order for the former to concentrate on his singles involvement.

Kyrgios closed his press conference by encouraging people to "watch" and "enjoy" the highlights of his performance.