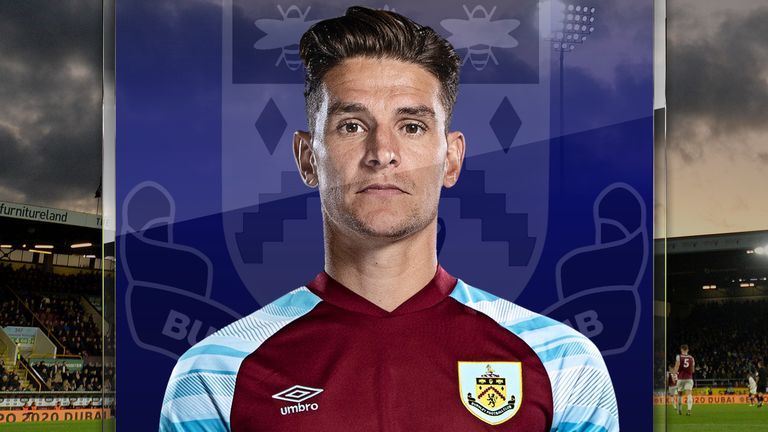 Ashley Westwood admits Burnley have had a tough start to the campaign, but believes the tireless work ethic, new signings and emerging youth bodes well for the season ahead.

The Clarets have registered only a point from their opening three games, but were unlucky to leave empty handed in the season-opening 2-1 defeat with Brighton, while there were positives in the 1-1 draw with Leeds. Next up? A tricky game at Everton in front of the Sky cameras on Monday Night Football.

"We've played well and created chances," says Westwood. "I think results will come. We started well against Brighton but couldn't quite see the game out. Liverpool is always going to be a tough one and then Leeds, when we did very well and should have got three points - but we didn't see the games out." 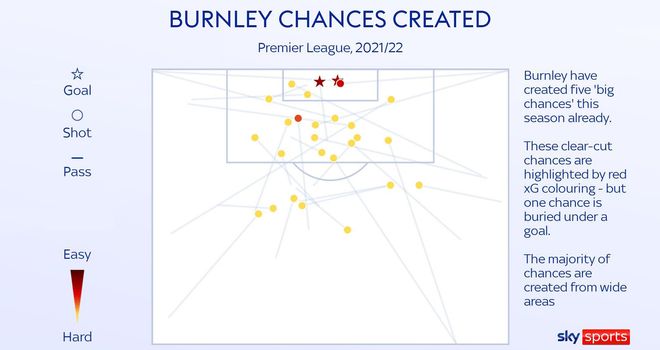 The 31-year-old is quick to highlight the impact of fans returning to stadiums. "It's nice now lockdown has lifted but the fans being back has been tremendous. The lads admitted having lumps in throats from the noise generated after the Brighton game - so it's good to have them back."

It might be easy to attach negative connotations with Burnley's playing style, which, on paper, certainly stands out as unique - perhaps even a throwback to yesteryear with a 4-4-2 formation and frequent long balls. But there are elements to the style which are certainly 'on trend': league-high numbers for distances covered and pressing from the front. 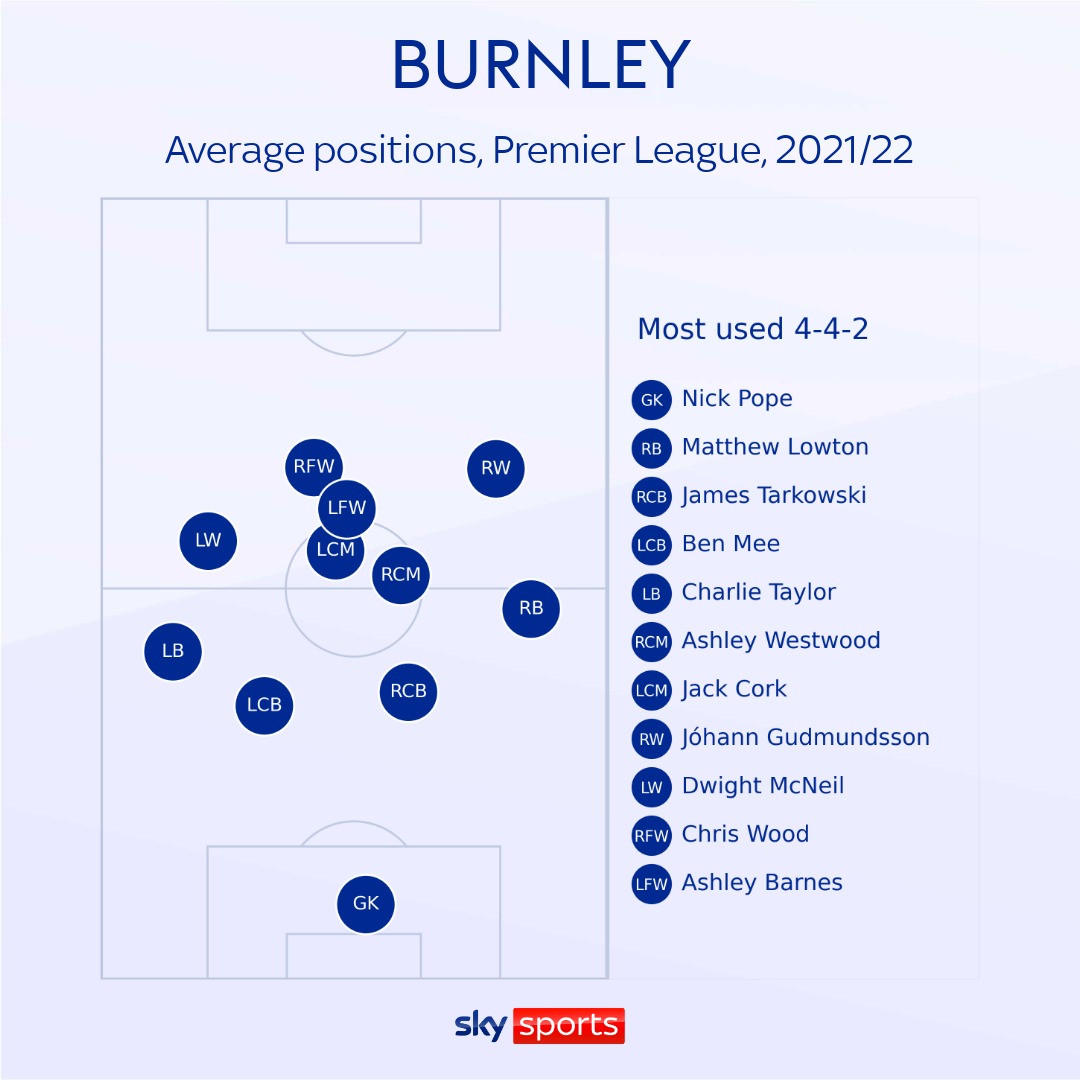 "We've always pressed teams high up," says Westwood. "The front two do it and do a brilliant job. I think the reason we [are pressing high more frequently on paper] is more teams are trying to play out from the back now and it gives us a chance to press them high." Ranks represent standings before fourth round of fixtures

Indeed, only Liverpool and Southampton recorded more than Burnley's 30 high turnovers in the Premier League this season going into the weekend - defined as passing sequences that start in open play and begin within 40 metres of the opponent's goal line, which effectively means winning back and retaining possession high up the pitch. 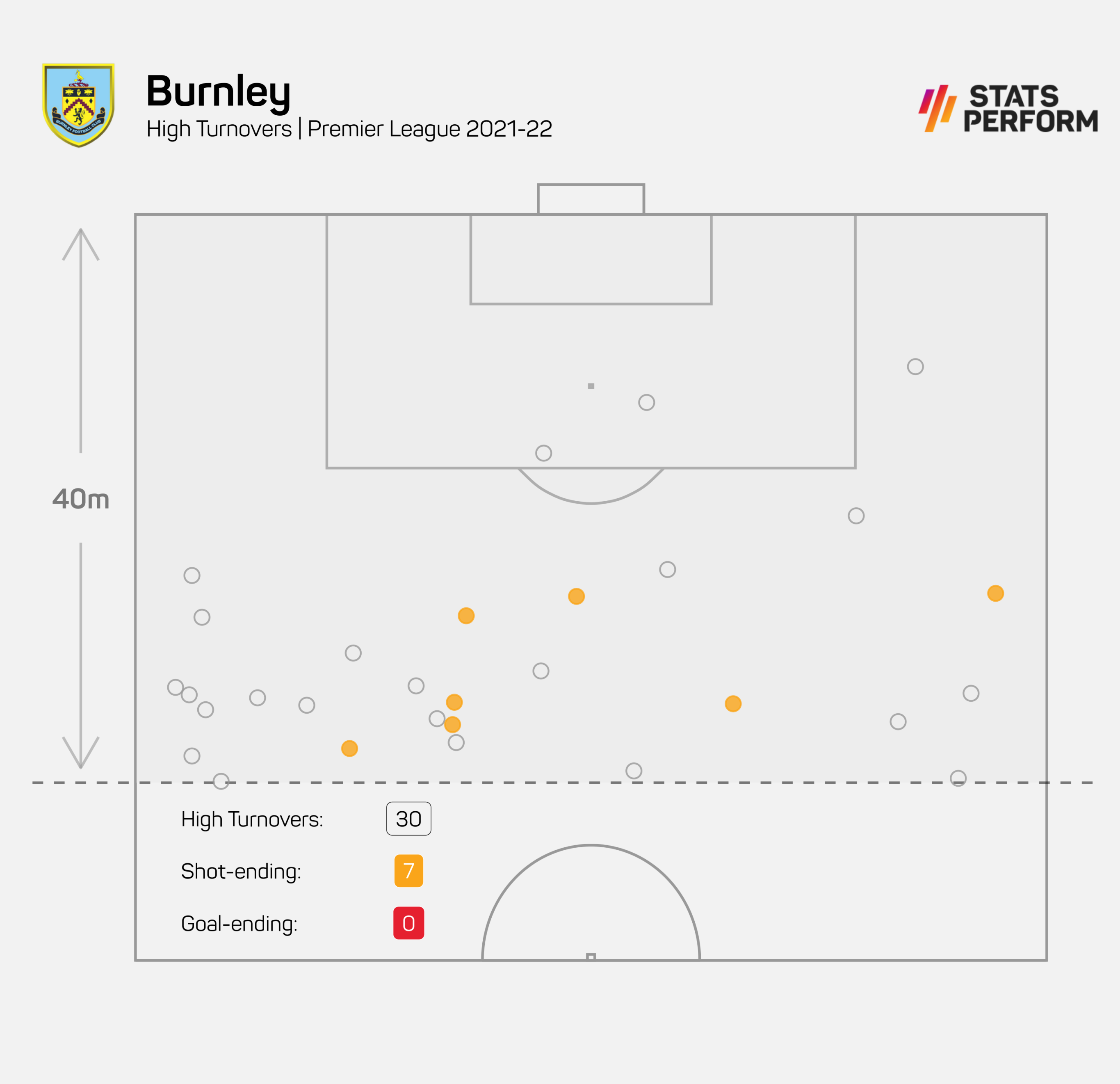 The high press often goes hand in hand with a team's physical ability to cover the hard yards and close opponents down. Indeed, no team in the Premier League has covered more than the Clarets' 331km this season.

"We've always [run a lot] - that's the main thing here. We always have to outwork teams. If you don't, you don't usually win the game.

"Our running stats were quite low against Leeds, we're not usually like that, but I think we sat off them a bit - we didn't want a basketball match. We always work hard. We usually get a result when we outrun the opposition.

"We've always [run a lot] - that's the main thing here. We always have to outwork teams. If you don't, you don't usually win the game."

"We're a fit bunch. We did a monster pre-season, which was tough - as always. The game has sort of changed, if you don't come out on top [physically], then you get left behind. We worked hard over the summer and that benefits us during the season."

Burnley are by far the league's aerial powerhouse. Dyche's side have won a league-high 82 headers already and the graphic below shows how this strength is utilised to protect their own box, claim long balls down the wider channels to collect second balls and attack crosses in the opponent's box. 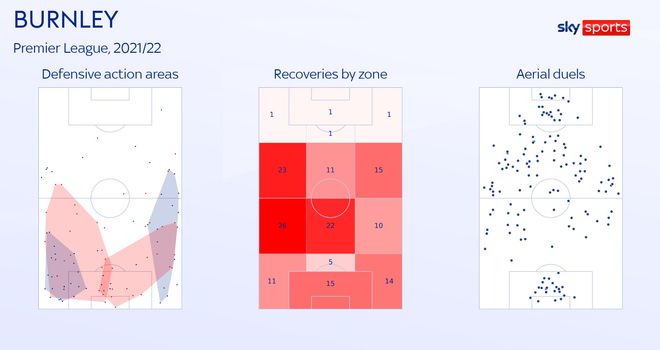 With such a physical style of play, is the 'lighter touch' by referees and VAR this season a boon? Burnley centre-back James Tarkowski was awarded a controversial goal against Brighton after appearing to push the defender out of his path - an incident that epitomised the new intention to officiate this term. "I think Tarks [Tarkowski] was getting grabbed to start with and he's got on the wrong side of [the defender], outmuscled him and powered it into the goal. So I think it was fair [to allow the goal]. 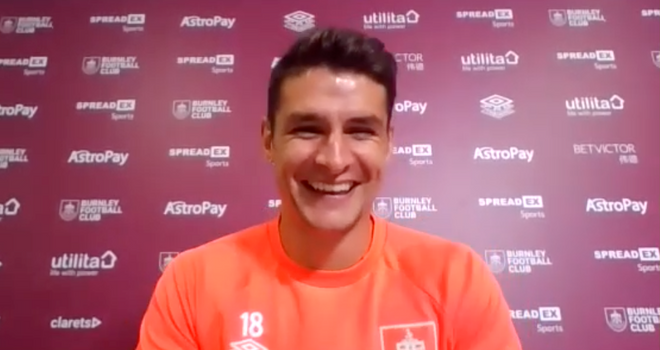 "It looks like a foul if you look back in slow motion, but if defenders are going to grab attackers in the box, then there's got to be give both ways. And [our physicality] is a big weapon for us and we're very good at it.

"I think [the benefit of extra leniency] was shown at the Euros, where the officials got it spot on. I watched a lot of the games and it was very good and has rolled on to the Premier League. I think it will benefit the league and keep the game flowing more."

Is the style unique?

Burnley have completed a league-low 553 passes and average possession of just 35 per cent, but a clash with Liverpool at Anfield skewed those figures so early on in the season.

When looking to attack, the graphic below shows how Dyche's side concentrate on building danger down the flanks - while only three clubs have attempted more than their 75 crosses to date. 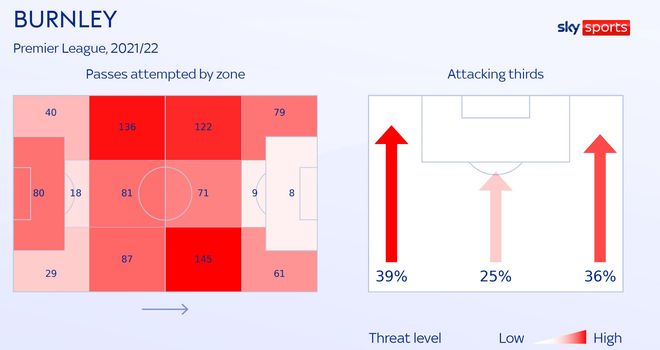 Broken down further, passing networks reveal the most common distribution combinations between players, with both central midfielders typically feeding their respective flank: Jack Cork on the left and Westwood on the right. 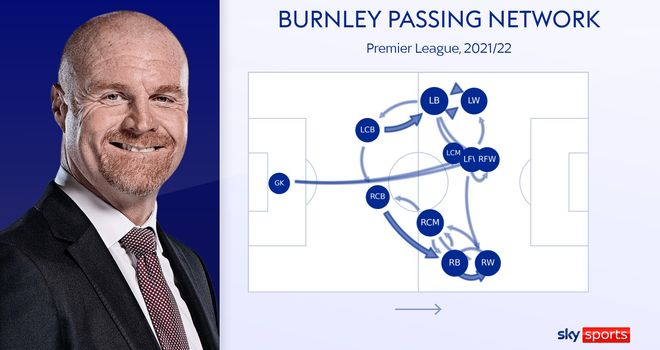 But the direct style with long balls certainly rings true - as visualised below. Only Brentford have attempted more long passes this season and the Clarets have a league-low passing accuracy of 68 per cent as a result. But, as Westwood explains, there is method behind the approach and the risky endeavour certainly pays dividends.

"[Our playing style] gets us results, we've all been here a long time and we know what's needed to stay in the Premier League, so we don't we don't get too bogged down with stats like that - we know what we are, what we're doing and what we need to get a win."

Westwood's role appears somewhat an anomaly. His deep positioning would perhaps define him as a defensive midfielder - but realistically reflects the team's deeper style. However, his numbers certainly excel in attacking areas.

"I've [ranked well] for creating chances and assists over the past few years," says Westwood. "It's something I've personally been wanting to maintain - to create as many chances as possible. It's putting balls in the box, feeding the two up top. It's developed my game and it's been a massive boost for me." 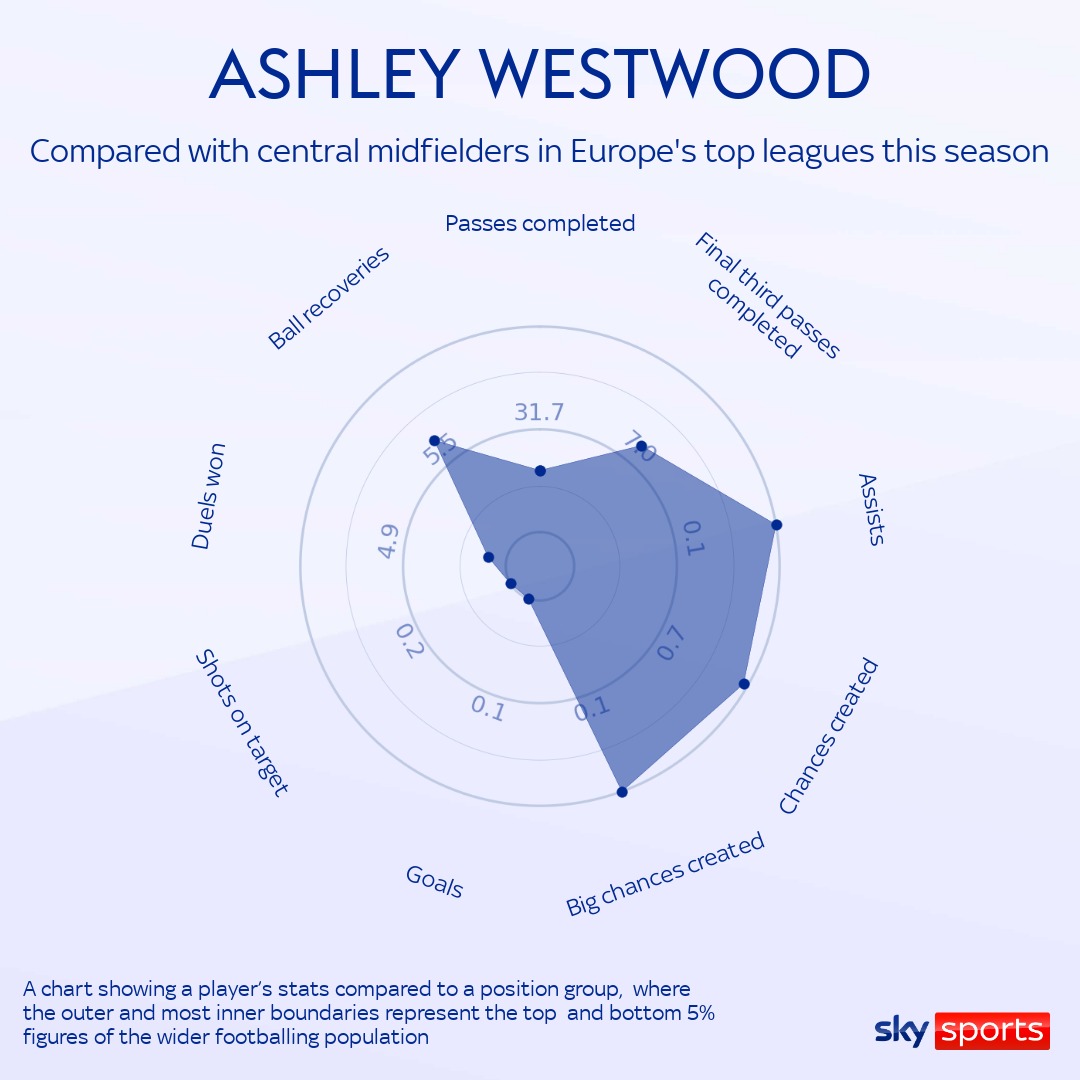 As the club ranks highlight below, the midfielder reigns supreme for assists, passes completed, final-third passes and crosses attempted per 90 minutes this season - ratios that reflect previous campaigns. 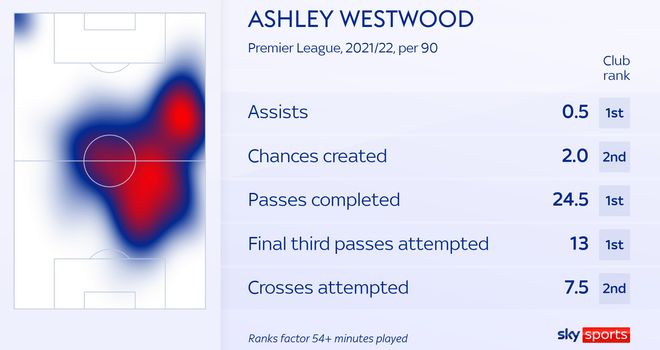 Westwood also has a knack of scoring in-swinging goals direct from corners with his favoured right foot, which he has achieved twice over the past 18 months - stemming from being the club's primary corner-taker down the left flank. 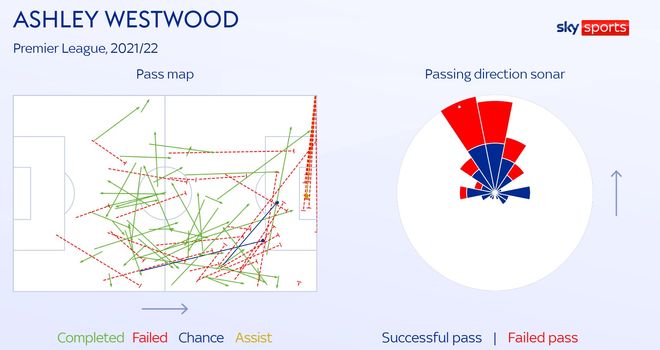 "The Southampton one was [assisted by] wind and the one at Liverpool was dubious - lots of people were saying it was a foul on the goalkeeper," adds Westwood. But will he take a corner down the right? "No, always on the left."

Dyche has expressed his concerns publicly about the club's transfer policy and limitations on numerous occasions over the years after several seasoned stars left for free when their contracts expired. Robbie Brady joined that list this summer - but the club did invest in two young full-backs: Maxwel Cornet from Lyon and Connor Roberts from Swansea.

"Connor hasn't trained with us yet, I think he is very close so we're excited to see him. Maxwel has been away [on international duties], so we've not met him yet and we're all excited for him to come in, too. [Signings were] needed, we've brought a few bodies in and it's competition for places again now - it's what's needed in the Premier League."

Burnley certainly need an injection of youth. Three games into the campaign, they have currently overtaken Crystal Palace as the league's oldest team.

"Rico's a tremendous player, a real talent. It's about nurturing these young lads, not letting them get ahead of themselves and, if they're lucky, they've got a good group [they can make it].

"I think you've seen it with Dwight - he's is a very grounded lad and he's just flourished from being in the group here and he's coming out of his shell a lot more and so he should, he's played 100 games and has that confidence behind him.

"So it's about bedding yourselves in with the first team and that should help nourish and develop the youngsters' games - seeing how we act and train every day, the professionalism and what's needed to be a Premier League footballer."

Burnley travel to Goodison Park to play Everton live on Sky Sports this Monday, having beaten the Toffees 2-1 on the road in March last season

But, closer on the horizon, Westwood and Co face Rafael Benitez's Everton on Monday Night Football and the midfielder points out the same fixture produced one of their standout performances last term.

"We put in one of our best performances there last year. Dwight scored a great goal and we know what's needed and will focus on what we need to do. We're a threat for any team in the league if we're on it.

"We never get carried away. We knew when the fixtures came out it was always going to be a tough start - you have to play these teams at some stage. Last season, we didn't win until later on in the season, so we all know what's needed and what we've got to do to get ourselves up the table and get wins on the board."