Robert Sanchez tells Sky Sports about leaving Spain for England as a teenager and taking an unconventional route to the top with Brighton; watch Brighton vs Man City live on Sky Sports Premier League from 5pm on Saturday; kick-off 5.30pm 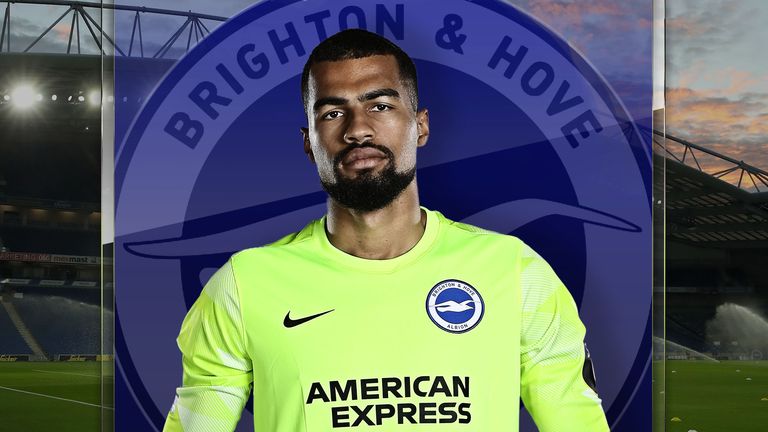 Robert Sanchez was 15 years old when he made the decision to walk out of one life and into another. A young goalkeeper with big aspirations, he had been left restless and frustrated by a spell in Levante's academy. When Brighton called, he listened.

He's glad he did. Seven years on, the impatient teenager so determined to succeed that he left his family behind, moving from Spain to England alone, without speaking a word of the language, to a city he had barely heard of, is achieving everything he set out to do.

At 23, Sanchez is Brighton's number one, arguably the best young goalkeeper in the Premier League, and, as of last month, a Spanish international too. It's little wonder he's smiling as he reclines in his chair in a quiet corner of Brighton's sprawling training ground.

"Obviously I was a little bit scared when I came here," he tells Sky Sports. "Everything was different and I missed the family a lot. But I was also excited to come to a new place, experience a new culture, play a new kind of football and learn a new language."

Sanchez was housed with a local family and another Spanish academy player, Luis Garcia, who later moved to Sevilla. "We were like big brother and little brother," he says, smiling. "We would go to Brighton, go to the cinema, go for food. He's still one of my best friends."

Sanchez was well looked after. "The club, academy-wise, is unbelievable," he says. "They help you with your studying and your football but also mentally, which is the most important thing for a young kid. They made me feel like I had a family here."

He took his inspiration from a player who had made the same move from Spain to England four years earlier.

"I always said David De Gea was my idol," he says. "He obviously moved to England and I think that made it easier for me. If De Gea had come here, I thought it must be good. It took bit of time to get used to things but now it feels more like home than Spain."

Sanchez was overlooked by Spain at youth level - "I remember the first call I had with them, they told me they didn't even know I was here, I was that young when I left," he says - but he now counts his boyhood idol as an international team-mate.

A player previously courted by England, for whom he is also eligible, received his first Spain call-up in March and has featured in every squad since, making his debut as a substitute in the recent 4-0 win over Georgia while De Gea watched on from the bench.

Spain boss Luis Enrique rates Sanchez highly and he is not alone. Since his breakthrough last season, he has started 34 consecutive Premier League games, helping Brighton keep 14 clean sheets, commanding his area superbly and earning plaudits for his distribution.

This season, he has conceded only five goals in eight games. Only three goalkeepers - Edouard Mendy, Aaron Ramsdale and Jordan Pickford - have saved a higher percentage of shots. Only one - Illan Meslier - has completed more passes. 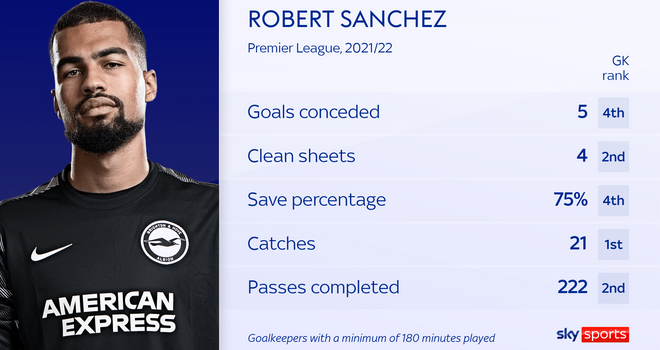 Sanchez is indebted to Graham Potter for giving him his chance - "he is an unbelievable manager and we are so lucky to have him," he says - but nobody, not even Potter, has played a bigger role in his rise to prominence than the club's goalkeeping coach Ben Roberts.

"I think all young kids can be a bit radical in different situations but Ben calmed me down," says Sanchez. "I would say he has helped me mentally as much as he has technically.

"He taught me that mistakes can happen, that I don't need to feel down about them, and to always be mentally positive, always smile, and if I do make a mistake, just go again, without showing any emotion, which is what the top-level managers like."

'He can be anything he wants in the game'

"He had some big shoes to fill, Mat Ryan was a great goalkeeper and a fantastic servant, but Rob’s attributes and qualities are at such a high level that he can be anything he wants in the game.

“He’s got huge potential. The challenge for him is to be playing in the Premier League and deal with what that throws at you, which he has done really well so far.

“He’s got amazing ability and, as a young man, he wants to learn, he wants to improve, he’s ambitious and he wants to help the team, so we just need to carry on helping him.”

Sanchez exudes calm now but it is not so long ago that he was crying down the phone to Roberts after making a costly error in one of his first appearances on loan at Forest Green Rovers in League Two.

"I felt really, really bad but he said no matter how you play, one game is not everything," says Sanchez. "You make a mistake, and yeah, people will talk about it. But if you have a good game in the next game, they will forget about it.

"It was about developing that kind of mentality, of going again and accepting that if I make a mistake, I can't repair it. I just have to get back to that level where I'm in the zone."

Sanchez initially resisted the idea of going on loan, believing he was already good enough to break into Brighton's first-team, but his time at Forest Green taught him humility and it was followed by an even more valuable spell with Rochdale in League One. Sanchez shone against Manchester United while at Rochdale

"As a young boy, you always think you're better than everyone, that going on loan is a bit stupid and you don't want to do it, but looking back now, they were the best decisions ever," he says.

"The first one was a bit harder, because I didn't want to go, but once I had that experience behind me and Brighton wanted to send me on loan again, I was like, 'Let's go', because I knew how it would benefit me and my football. The second loan was massive for me. It taught me a lot of things."

Sanchez won praise for his performances in cup games against Manchester United and Newcastle that season - "he looked right at home on that sort of stage," one Rochdale coach told Sky Sports in March - and when he returned to Brighton in the summer of 2020, he was deemed ready for a run at the number one shirt.

Soon enough, it was his. Sanchez made his Premier League debut in a 2-1 defeat to Tottenham last November and Ryan was duly dispatched on loan to Arsenal in January. A few weeks later, in February, Sanchez was handed a new four-and-a-half-year contract.

They were proud moments for his family, watching from afar. "When I was in Spain, they always saw me. They would come to my games and come to see me training. But when I left, they just had to count on me to do well, to try to make the dream come true knowing one day I might get released and go back home.

"Now, after seven years, I'm playing in the Premier League and going with the national team, which is the biggest thing you can do in Spanish football, so it's unbelievable for them."

His family have seen how far he has come but not the hours of work that have gone into honing his game on the training pitch.

"As a 'keeper, technically, I think I have improved everything," he says. "I think my distribution is my best quality now. I'm really calm and I can play every single type of pass, using different techniques. "My positioning on the pitch as well," he continues. "I used to stay on my line all the time but now I try to keep a really aggressive position on the pitch. I come for crosses and try to stop cut-backs.

"Any goalkeeper of a high level, if they have good positioning on the pitch, it's really hard to score against them. Most goals, unless the striker puts it in the top bins, are scored because the positioning of the goalkeeper is not good.

"Any goalkeeper who has worked his whole life and got to this level, it's for a reason, it's because they are the best. They've got the power, the ability and the speed to make saves. So if they don't, and a goal looks easy, it's almost always because of positioning.

"That's one of the things I think I've improved the most, but also moving fast and being set when the ball leaves the striker's boot. If you're still moving when he shoots, you ain't getting there. Being set allows you to move quickly. I've improved that a lot too." 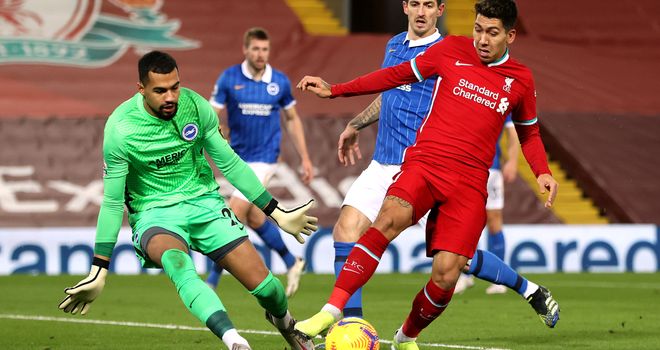 Roberto Firmino tries to get past Sanchez

Sanchez's appetite for self-improvement is obvious and on Saturday afternoon at the Amex Stadium, he is relishing the opportunity to test himself against Manchester City's Ederson, another goalkeeper with a flair for starting attacks as well as stopping them.

"Playing against him, I like to call it a distribution competition, to see who can do best on the day," says Sanchez with a grin. "I really enjoy watching him. I've looked at a couple of points in the way he plays and tried to put them into my game.

"I'm really excited to play against him and the whole City team. We have started the season really well and we are playing the way we want to. There is a little bit of pressure on us to keep that level now but everyone is really happy and really comfortable."

Nobody more so than Robert Sanchez.