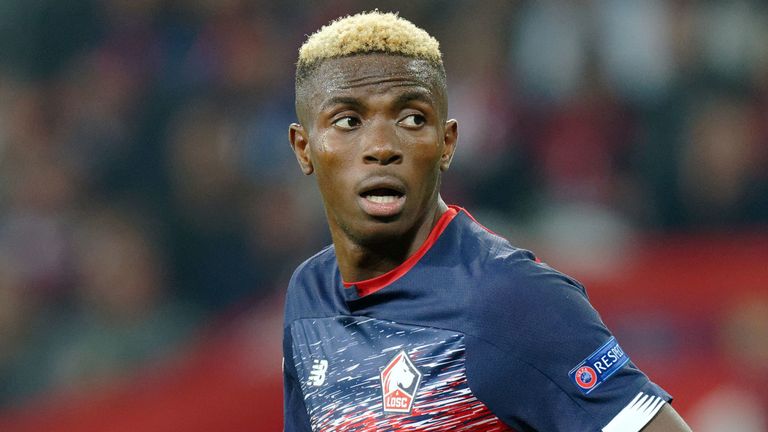 Victor Osimhen has scored nine goals for Lille in Ligue 1 in 2019/20, and another three in cup competitions

Liverpool, Chelsea and Tottenham are among a host of clubs monitoring the Lille striker Victor Osimhen, Sky Sports News understands.

However, the Nigeria international is expected to stay at Lille for the rest of the season unless the French club receives a January offer that is too good to refuse.

The 20-year-old is said to be happy at Lille and his priority is to help them secure qualification to next year's Champions League, while continuing to develop his game. Osimhen celebrates his goal against Chelsea

The club are currently third in Ligue 1, four points behind second-place Marseille but 11 behind league-leaders Paris Saint-Germain, and Osimhen has scored 12 goals in all competitions so far.

Two of those came in the Champions League, including one against Chelsea in a 2-1 home defeat, as Lille went on to finish bottom of Group H.

He had been developing under the guidance of assistant manager Joao Sacramento, who is now Jose Mourinho's number two at Spurs.

Lille's sporting director Luis Campos, who signed Osimhen from Belgian side Charleroi in the summer, is also known to be a good friend of the new Tottenham boss. 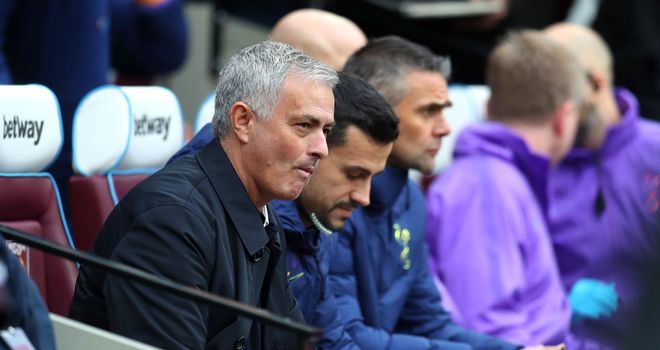 Joao Sacramento sat alongside Jose Mourinho at the London Stadium

Osimhen, who has also spent time at Wolfsburg in Germany, is currently the second-highest performing striker in Ligue 1 behind Wissam Ben Yedder, according to Wyscout data, above the likes of Kylian Mbappe and Memphis Depay.

And Osimhen, who has four goals in nine caps for Nigeria, still has four-and-a-half years left on a five-year deal he signed with Lille in 2019.