Everton director of football Marcel Brands: "At the beginning of the transfer window, we inquired at United, then it was impossible"; Donny van de Beek has made only four Premier League starts since his arrival at Manchester United 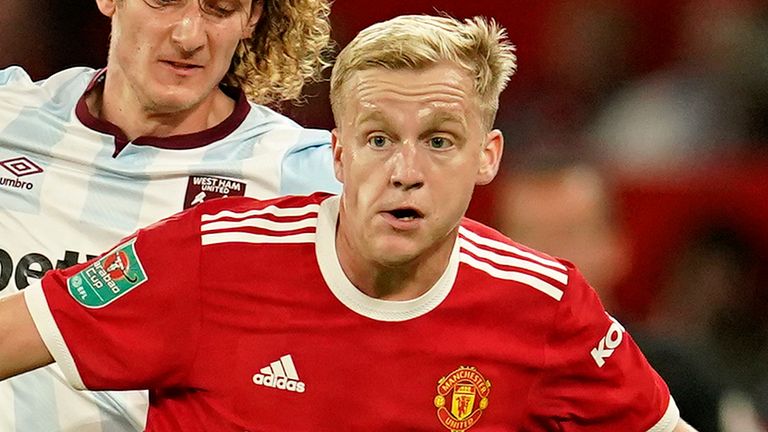 Everton attempted to sign Manchester United midfielder Donny van de Beek in the summer, according to their director of football Marcel Brands, who has not ruled out another move in the January window.

Netherlands midfielder Van de Beek has struggled to break into the first team at Old Trafford since a £39m move from Ajax in the summer of 2020 and Brands wanted to revive the player's career at Goodison Park this season.

Sky Sports News reported in the summer that a club had made a late inquiry for the player, but United did not entertain a transfer and Brands says it is a shame Van de Beek is still not playing regularly.

"We had him on our list," Brands told Dutch broadcaster NOS's Along the Line sports programme. "At the beginning of the transfer window, we inquired at United, then it was impossible.

"At the end of the window, I received a call from Guido Albers, his agent, that he might be loaned out after all. But at the last minute it was cancelled; stopped again. "You always depend on whether a club wants to cooperate, and it is early October, so much can still happen with injuries. United are playing on various fronts. It's hard to say now [whether we will return in January].

"It is of course a pity for Donny [that he is not playing regularly]. He is a very good player, no doubt about it. Such a boy wants to play and wants to return to the Dutch national team.

"But you know that at such a club the pressure is great and the competition is huge. When you see what United had sitting on the bench [at the weekend]: Cristiano Ronaldo, Jadon Sancho, Paul Pogba."

Van de Beek has made only four Premier League starts for United since his arrival, scoring once, plus five more in the Champions League and eight more in the domestic cups. His total appearances stand at 38.

He had been the talisman of Ajax's exciting young team under Erik ten Hag, which reached the Champions League semi-finals in 2019, scoring six goals in the competition and 28 more in over 100 appearances in the Eredivisie.