Andy Ruiz Jr has seized another world title shot in the turbulent heavyweight division and says Anthony Joshua will find out that first impressions can be misleading.

Ruiz Jr was set to be a keen observer this weekend. The fast-handed Californian, a former world title challenger, was ready to take a seat in his Imperial Valley home and watch Anthony Joshua's American debut against brash New Yorker, Jarrell Miller.

Plans were made, friends were likely invited around, and it promised to be an entertaining night in the Ruiz household, but then things changed. Miller failed a drug test and chaos ensued. Joshua needed an opponent and Ruiz was named as his new foe for Saturday's world heavyweight title fight at Madison Square Garden in New York, live on Sky Sports Box Office.

A promising amateur when representing Mexico, Ruiz made it to the latter stages of many tournament qualifying events, but glory repeatedly evaded him anywhere above domestic level. Turning professional in the spring of 2009 and largely based on America's west coast, Ruiz, despite his appearance, demonstrated to audiences that he was an accomplished fighter on multiple occasions. With world heavyweight titles in touching distance, Ruiz admits it's a position that he hardly envisaged growing up. 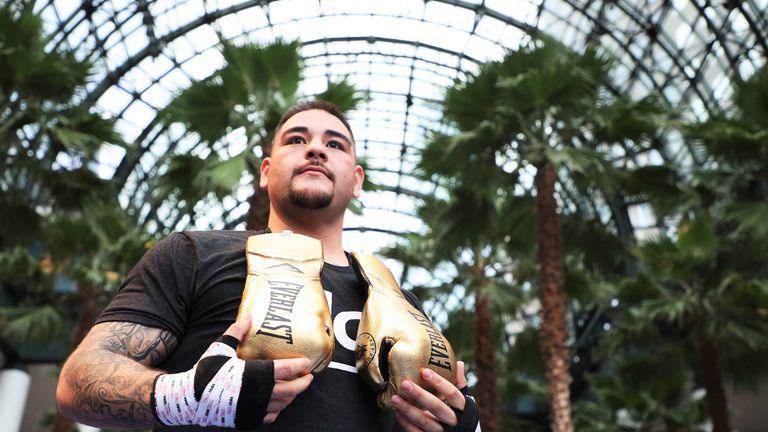 "I didn't think I would come to this level. A lot of people doubted me," reveals the likeable 29-year-old. "They said: 'this chubby kid won't do nothing, he's not in shape'. But I kept pursuing my dream, I kept training hard, and put all the negative stuff to the side. I believed in myself.

"Everybody has been underestimating me since day one, and that gives me extra motivation to work harder. Yes, we need to work harder on the body. But it doesn't make you a great fighter, having a six-pack. What makes a great fighter is having heart and throwing punches. It's what's on the inside."

Now possessing an inner confidence that's desperately needed at the highest level, Ruiz is about to challenge for his second world title after his first effort saw him narrowly outpointed by Joseph Parker in the New Zealander's backyard. Ruiz was desperately unlucky not to receive the verdict that night as he pushed Parker to the limit in front of a hostile crowd that let Ruiz know exactly what they thought of him. Realising that he was more than capable of competing in the division's upper echelon, Ruiz is now focused on becoming champion and to make the people of Mexico proud with an historic title win in the top weight class.

Andy Ruiz Jr thinks he's going to cause an upset this Saturday.

"It's passion and courage to fulfil my dreams and accomplish my goal of becoming the first Mexican heavyweight champion of the world," said Ruiz Jr.

"Being at the Canelo [Alvarez] fight was a motivation, it was excitement. I want to be the Canelo of the heavyweight division. There has never been a Mexican heavyweight star. It's unusual but God gave me this talent so I'm here to shock the world, and to get the upset."