Dillian Whyte will earn the right to challenge the winner of Deontay Wilder vs Tyson Fury if he can defeat Oscar Rivas on Saturday night.

Whyte and Rivas will battle to become the mandatory challenger to the WBC title and the victor will pick up the interim belt. That would provide Whyte with his long-awaited first world title shot.

Reigning champion Wilder will first be free to rematch Luis Ortiz and Tyson Fury (they battled to a draw last December), with Whyte poised to face whoever emerges with the title next year.

There is a deadline of May 2020 set by the WBC by which Whyte must have challenged for their title. 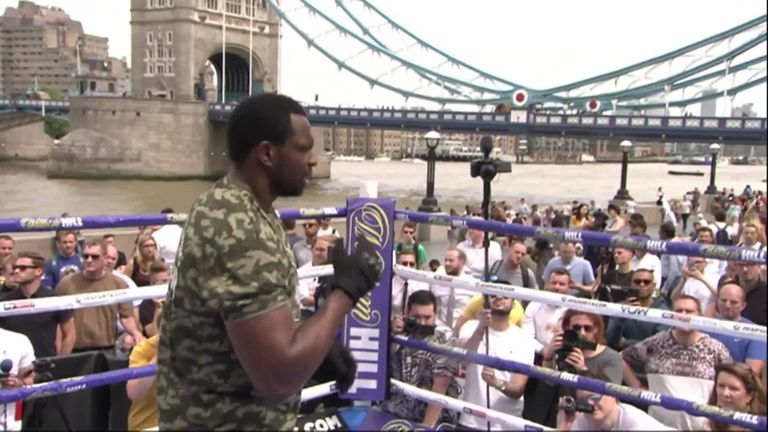 The next heavyweight to shake up the division? 💥💪

Oscar Rivas is hoping to be the latest underdog to cause an upset. This weekend he takes on @DillianWhyte LIVE on Sky Sports Box Office - BUY HERE 👉 https://t.co/Pej92wtAB5

Dean Whyte is the voice of reason in his brother Dillian's ear...

"I'm very happy that we have reached an agreement with the WBC and this makes Saturday night even more so important," said promoter Eddie Hearn.

"Dillian Whyte has faced all comers in reaching his WBC No 1 position and now he stands just one more test away from a shot at the WBC world title - it's all on the line this Saturday at The O2.

"We've been campaigning for this for a long time. There is one more hurdle to overcome in Oscar Rivas."

Meanwhile, the IBF, WBA and WBO heavyweight title belts were lost by Anthony Joshua to Andy Ruiz Jr last month, and will again be on the line in an expected rematch.

Whyte has been No 1 in the WBC rankings since November 2017 but, last month, was overlooked as the mandatory challenger in favour of Dominic Breazeale who was promptly knocked out by Wilder inside one round.

Whyte has been on a brilliant run of nine consecutive victories since his sole defeat, to Joshua in December 2015, which includes wins over Derek Chisora (twice), Joseph Parker, Lucas Browne and Dave Allen.

"These guys are always trying to find another way out of fighting me, as they keep doing," Whyte said about Wilder and Fury earlier this week, but his shot is finally edging closer.

First Whyte must avoid a slip-up against his dangerous visitor this weekend - Colombia's Rivas is unbeaten in 26.

"This is a banana skin, a 50-50 fight," said Hearn. "There are similarities between Rivas and Ruiz Jr. Both great amateurs, both totally overlooked, both have an opportunity to change their lives. Andy Ruiz did it, and Oscar Rivas believes he will do it."