"We're going to bring war, I can't box. Bing, bing, bombs away, he's getting knocked out!" 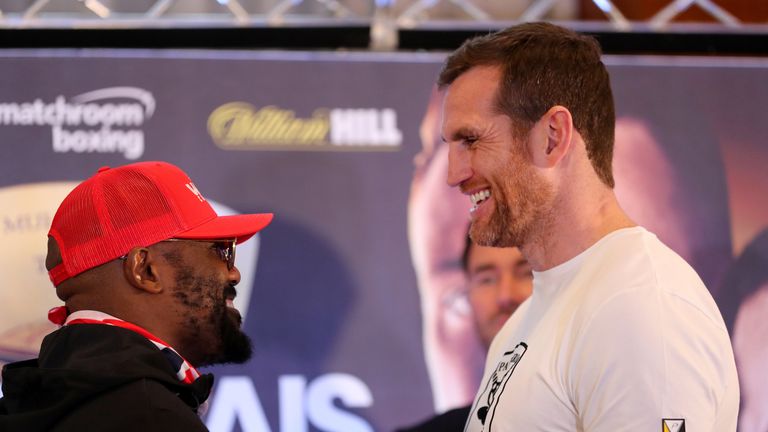 Price: This fight was a no-brainer

Derek Chisora likened David Price to a "sheep going to the slaughterhouse" as he played farmyard animal noises from his phone at their final press conference.

🗣"Derek needs this to get himself up for the fight." 👀@DerekWarChisora & @DavidPrice_1 are putting their friendship aside this weekend as they make business their priority pic.twitter.com/q5B6SqxWby

The heavyweights with 42 combined knockout wins will collide alongside the World Boxing Super Series final between Regis Prograis and Josh Taylor on Saturday, live on Sky Sports Box Office, and went head to head for the first time on Thursday.

Promoter Eddie Hearn's questions to Price were interrupted by strange noises coming from the phone at the opposite end of the table, belonging to Chisora.

The veteran fan-favourite, who has spent some of the build-up on a farm and brought his dog Winston to the public work-outs, said: "That is a sheep going to the slaughterhouse. Listen, I don't need to sell anything. You're not in my league, you don't understand.

"That is you right there. I'm going to deck you, you don't understand."

Price calmly responded: "I know Derek needs this to get himself up for the fight. That's sound, because the last thing Derek needs is to be shaking my hand, because we do like each other, and it's cool. That's fine. This is business, 100 per cent."

Chisora and Price smiled at each other in their first face-off but both heavyweight contenders had previously been made aware of the importance of their match-up.

David Haye, Chisora's manager, said: "Price is a weapon, I've sparred with him over the years, he has genuine world-class power.

"He's the hardest person I've been hit by, behind Deontay Wilder. David Price is no joke! When a fighter has nothing to lose, they're very dangerous."

But Chisora threatened: "Everybody has power in the boxing game. He has to be aware of what I can do to. We're going to bring war, I can't box.

"Bing, bing, bombs away, he's getting knocked out!"

Price, a replacement for Joseph Parker who withdrew after being bitten by a spider, said: "I expect it to be a long fight and a painful fight for Derek because my accuracy is the telling point. I expect a knockout win."

They briefly argued when Price interrupted Chisora by saying: "You will walk onto one."

Chisora responded: "I'm happy to walk onto one but I will deliver one."

🗣"I'm gonna have to show different layers." @Lawrence_tko says that he needs to demonstrate all his skills against Yves Ngabu if he is to become European cruiserweight champion pic.twitter.com/RszDdbvoN7

Lawrence Okolie, who challenges European title-holder Yves Ngabu, said: "This is not my first time fighting a champion, I'm used to this. It always ends with me walking away victorious."

Belgium's Ngabu replied: "I wanted to fight the UK's No1 and this is what I've got. I'm more than ready."

🗣"These are the big shows I've always said I'd love to be involved in." @ricksterko is a 3-weight world champion, but he's never boxed at the O2 before. He takes on former world champ, Lee Selby this Saturday night! pic.twitter.com/AeadxGvhjF

Lee Selby warned opponent Ricky Burns: "It will be difficult for the loser to come back from this, probably more difficult for Ricky because he's a little older."

Burns said: "This is a tough fight against Lee. I remember when we sparred, I couldn't believe the size of him for a featherweight."

🗣"If this guy comes for it, he's gonna get banged out." 💥@ConorNigel is looking for a big finish again this Saturday when he takes on Steve Jamoye pic.twitter.com/gNgWaN1d24

Conor Benn, who meets Steven Jamoya, said about his father Nigel Benn: "I pray for the power that he had."

Watch the WBSS final and Chisora vs Price on Saturday, live on Sky Sports Box Office, from 6pm. Book it via your Sky remote or book it online here. Even if you aren't a Sky TV subscriber you can book and watch it here.