"At my home ground it would have been a bit of a dream to have got over the line"; Ollie Pope was "gutted" to miss out of a century after falling for 81 on day two of England's fourth Test against India at The Kia Oval; watch day three from 10.15am, Saturday on Sky Sports Cricket

England batsman Ollie Pope admitted he was "gutted" to have missed out on a century on his home ground after being dismissed for 81 on day two of the fourth Test.

The 23-year-old Surrey right-hander batted superbly on his return to the side after injury and had taken the hosts into a first-innings lead over India at The Kia Oval before dragging the ball onto his stumps with a first Test hundred on home soil within sight.

Joe Root's side eventually earned a 99-run lead before India reduced that to 56 as they reached stumps on 43-0, leaving Pope to reflect on the "dream" ton that escape his grasp.

"To be honest I was pretty gutted," he told Sky Sports. "At my home ground it would have been a bit of a dream to have got over the line.

"But I guess if someone said you'd get an 80 first game back you'd have taken that, but I'm gutted all the same. 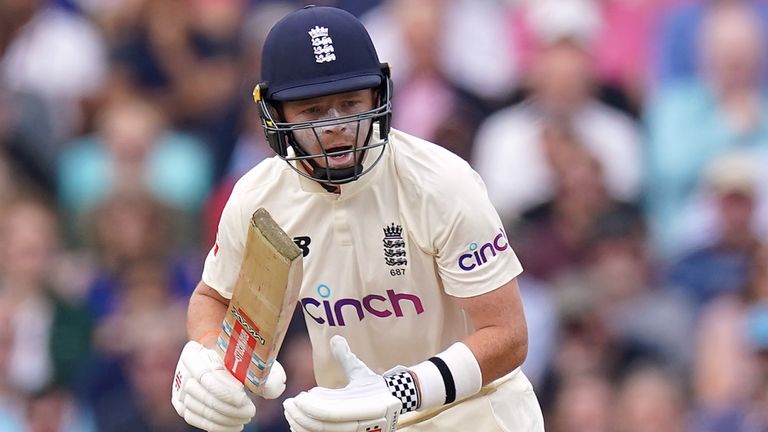 "I tore my quad so I haven't had a lot of game time. It's hard to prepare for a Test, nothing prepares you for that sort of morning of a Test match.

"I just wanted to be as confident as I can with the bat. I've netted hard over the last few weeks. I've watched pretty closely these last few Tests and just tried to give myself the best chance."

Pope was able to score all round the wicket in his 159-ball knock and Sky Sports pundits Mark Butcher and Nasser Hussain believe a change of guard and opening up the offside played a big part in helping him register a sixth Test fifty.

"He played really well and it is so nice to see him play that on drive, peel off a couple of extra cover drives and look to be in control, but also look to have options to put pressure back onto the bowler," Butcher said.

"That is what brought him to prominence in the first place, the fact he's a free-scoring player, who can hustle a little bit and isn't restricted by one side of the ground or the other.

"He's found himself at a more neutral position, I think, at the crease in terms of the set-up and that has just allowed him to get his head on the line of off stump, leave anything that was wider than that and score when they stray. That's the art of batting, finding ways of scoring runs.

"It doesn't necessarily mean there is a right or wrong way in terms of where you take your guard, but if where you're standing at the beginning stops you freely accessing areas to score then the game stands still and you get nailed by the odd good one.

"I think he played beautifully and I'm really pleased for him that he has done so because there have been some murmurs about, basically, 'here is a guy who gets everything thrown at him and has it his own way because he looks good, he scores runs in the Championship which doesn't really count' - he averages 100 at this ground!

"He's got 81 in a Test match and it's 19 fewer than his 100 average at this ground. So, of course, he's disappointed but it's an excellent return for him." Having long been touted as the natural successor to Root, Hussain says it is now important that Pope kicks on and converts all of his undoubted talent into consistent and big runs for England.

"He's spent time in the nets whereas sometimes when you're playing all the time, you can't correct your game. He's also had a great role model in the No 1 batsman in the world, who has done exactly the same thing!

"He's looking at Root doing it and he's said that against this attack, it's working. There's not a good player in there, he is a good player and now he's got to kick on.

"The other thing I would advise him to do - because before Malan got picked, it was 'can we bring Pope in at No 3? No, we can't because he's never played above four for Surrey.'

"I think eventually, he'll have to knock on the door of Alec Stewart and say 'I'm such a good player, I probably need to go up the order in county cricket.'"

Watch day three of the fourth Test between England and India, from The Kia Oval, live on Sky Sports Cricket and Sky Sports Main Event from 10.15am on Saturday.