Sam Curran starred for England against Afghanistan, taking 5-10 as Buttler's side won their opening match by five wickets; England are next in action against Ireland at MCG on Wednesday 5am UK time. 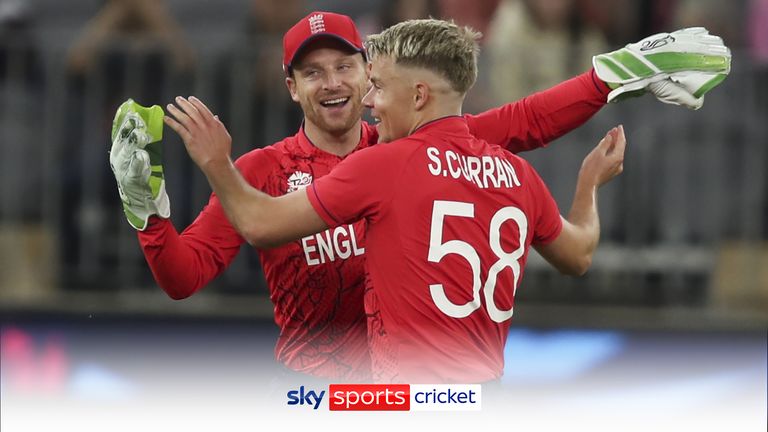 England opened their T20 World Cup campaign with a comfortable five-wicket victory over Afghanistan in Perth.

While their batting line up stuttered chasing a low score, England's bowling and fielding impressed as they put Afghanistan into bowl.

But it was Sam Curran (5-10) who was the standout for England. The 24-year-old came into the attack in the eighth over and finished with a five-wicket haul - the first time an English men's bowler has taken a five-for in T20s.

Sporting a fresh hair cut, that Curran admitted was too short for his liking, the all-rounder bowled fantastically at the death as he skittled through Afghanistan's lower order.

Curran - 13 wickets in nine matches before the World Cup

Since getting his first call up to the England set up in 2018, Curran has been a regular feature in the side in all formats.

But he hasn't quite been able to cement a place in the T20 side, with question marks over his role. Until now.

In recent weeks, Curran has shown how useful he is in this format. He hasn't been needed to bat that much but he impressed with the ball, taking 17 wickets in 14 matches.

Against Pakistan and Australia, England used Curran at the death in the absence of Jofra Archer and Chris Jordan. Curran has grasped the opportunity with both hands.

He took eight wickets in seven matches in the Pakistan series and five in two against Australia before the World Cup - the perfect build up to the first match.

After the first innings, Curran said that Jos Buttler has asked him to be "ready in all phases" of a match, something Eoin Morgan said Curran is capable off.

The former white-ball captain described Curran as "very street smart", adding: "He is a guy who compartmentalises things very well which is a huge attribute to have when you are a death bowler.

"You have to be able to park a bad ball if you have been smashed for a six or consecutive sixes and get back in the game and he has the ability to do that. Sam is never afraid to try things.

"If England need him to take the new ball, he will take the new ball. In this game, he didn't bowl until the eighth over and he walked away with 5-10. His accuracy and skill level is exceptional at the moment."

Hussain agreed, adding that he has transferred his franchise form into England colours.

"When he was picked for the England Test side, I think Ed Smith said he always finds a way of getting into a cricket match and that anytime a game got close Curran would come in and deliver," he said.

"I think his death bowling - although it wasn't specific death bowling here - and the way he bowls it short into the surface has made him a much better death bowler over the last six months.

"I think he has value around the world now and is just improving every single time and it's a real bonus for England if they are not going to play Jordan that Curran is delivering at the death. Hopefully he will continue to do so."

Buttler also heaped praise on Curran after the match, saying that he has the character to bowl at the death and that he "is thriving with the extra responsibility", while Wood described Curran as "top draw".

Curran himself admitted that he has to be adaptable in this format, telling Sky Sports Cricket that he has "tried to get better at different phases of the game".

Last year in the United Arab Emirates, England were on course to reach the final of the T20 World Cup, but they were let down by their bowling at the death - conceding 56 runs in the final three overs against New Zealand in the semi-final.

This year, Buttler will hope he can continue to rely on Curran in the crucial final overs as he looks to lead England through the Super 12s.

England are next in action against Ireland at MCG on Wednesday (5am UK time). Watch the match live on Sky Sports Main Event and Cricket from 430am.