Virat Kohli after match-winning innings against Pakistan: "Hardik kept telling me, 'just believe we can do it, can stay until the end'. Standing here I just feel like it was meant to be, it's a very, very special moment"; India beat Pakistan off final ball after initial batting collapse

An emotional Virat Kohli said he was "lost for words" after playing a match-winning innings against Pakistan that his skipper Rohit Sharma feels is not only his finest but also one of the best ever seen in an India shirt.

Kohli's 82 not out from 53 balls lifted India to an astonishing final-ball victory over Pakistan at a packed-out MCG, with his side recovering from 31-4 to complete a chase of 160 in an absorbing T20 World Cup encounter.

Kohli shared a stand of 113 from 78 balls with Hardik Pandya (40no off 37) for the fifth wicket, and his three fours off Shaheen Shah Afridi in the 18th over, two sixes off Haris Rauf in the penultimate over and maximum off Mohammad Nawaz in the last proved critical with India having initially needed 48 runs from the final 18 deliveries.

Kohli said: "It's a surreal atmosphere. I honestly have no words. I have no idea how that happened. I'm lost for words.

"Hardik kept telling me, 'just believe we can do it, can stay until the end'. Standing here I just feel like it was meant to be, it's a very, very special moment."

"But I will count this one higher because of the magnitude of the game and the situation. It seemed impossible but Hardik kept pushing me, we went deep and it happened."

Kohli - who last month scored his first international century for 1,021 days during an Asia Cup encounter with Afghanistan - also thanked India's fans: "For all these months I was struggling, you kept backing me and I am very grateful for your support."

'One of India's best knocks'

India captain Rohit added: "I think it's Virat's best [innings] for sure. From the situation we were in and to come out with a victory, I think it has to be one of India's best knocks, not just his best knock.

"We were so behind the game, and the required rate was just climbing up and up. It was an extremely brilliant effort from Virat.

"He used his experience more than anything else, staying calm under pressure. We know how good he is when the score is in front of him. He's one of the best chasers in the world."

"The way we won was pleasing as we were in no position to get that target. It's good for our confidence. It's always nice to get off the mark in the first game and in such a big game as well.

"We were always wanting to make sure we stayed in the game as long as possible, that was the message and something we have been talking constantly about.

"No matter what the situation, you've got to back yourself, believe you can pull through, and that crucial partnership between Virat and Hardik was a game-changing moment."

Pakistan captain Babar Azam, who side posted 159-8 thanks principally to half-centuries from Iftikhar Ahmed and Shan Masood, said: "It was a tight game. We started well in our bowling and we had a chance. We just asked the boys to believe in themselves.

"But all credit to Hardik and Kohli. They shifted the momentum and finished the game well." 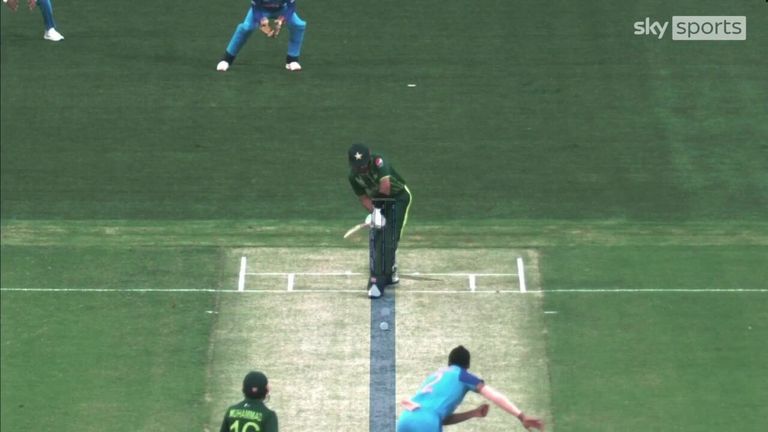 Asked why he kept spinner Mohammad Nawaz back for the final over instead of one of his seam bowlers, Babar said: "We needed a wicket, that's why we utilised our main bowlers [before the final over].

"There were a lot of positives. The way Iftikhar played, the way Shan [Masood] played and finished the innings was good for us."

India and Pakistan both return to action on Thursday. India face Netherlands in Sydney (8am UK time) before Pakistan play Zimbabwe in Perth (12pm UK time).