South Africa have been eliminated from the T20 World Cup after slumping to a shock 13-run defeat to Netherlands in their final Group 2 game in Adelaide.

Seven of South Africa's top eight reached double figures but none could push on against a disciplined Dutch attack as Temba Bavuma's side were knocked out.

The Proteas' defeat confirmed India's spot in the semi-finals, with Pakistan clinching the second qualification spot in Group 2 when they beat Bangladesh by five wickets later in the day. 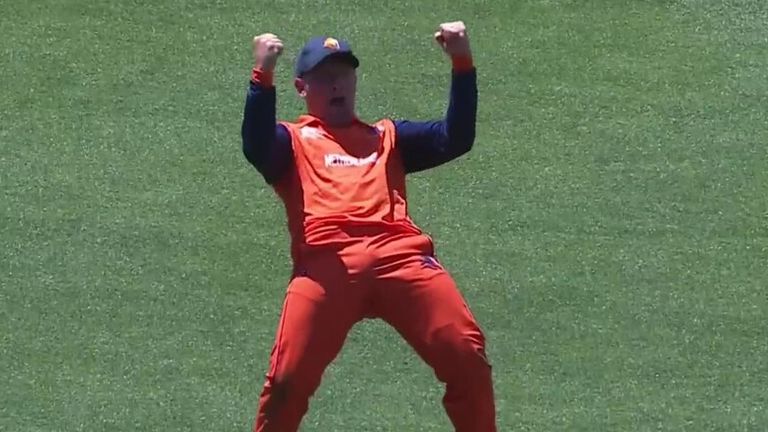 South Africa appeared to be closing in on the knockout stages a week ago, with a five-wicket win over India following a rained-off fixture against Zimbabwe and a 104-run demolition of Bangladesh.

However, they then lost a rain-affected clash against Pakistan on Thursday and this defeat to Netherlands has now ended their hopes of a first World Cup title.

Netherlands finished fourth in Group 2 and will qualify automatically for the next Men's T20 World Cup, which is due to be held in the West Indies and the United States of America in 2024.

Dutch seamers Fred Klaassen (2-20) and Brandon Glover (3-9) were instrumental in restricting South Africa, Klaassen with the first wicket of the innings when he had an advancing Quinton de Kock (13) caught behind by Scott Edwards in the third over.

Bavuma (20) was cleaned up by Paul van Meekeren at the end of the sixth, while Glover went on to account for Rossouw, David Miller (17) and Wayne Parnell (0).

Miller was dismissed by a superb catch from former South Africa all-rounder Roelof van der Merwe, with the 37-year-old, who played for the Proteas in the 2009 and 2010 T20 World Cups, running back from short fine leg to take a screamer.

Ackermann and Edwards plundered 31 runs across the final two overs of the innings, with Kagiso Rabada struck for three fours in the 19th and Ackermann nailing Parnell for two sixes in the 20th, runs that would ultimately cost South Africa dear.

Netherlands were left to toast a second successive win in the Super 12s, with this triumph over the Proteas following a victory over Zimbabwe after they had begun the round with defeats to Bangladesh, India and Pakistan.

Bavuma to consider future as captain after World Cup exit

When asked about his position as white-ball captain, South Africa skipper Bavuma said: "To be considering that now, a lot of it will be emotional in terms of my role as the captain of the team but it's something that I probably will think about.

"It would be emotional now if I thought about all of that. Whatever happens, I carry myself with dignity through all the good and bad times. If I were to leave, I would leave with my pride intact."

The defeat only adds to South Africa's 'chokers' tag at World Cups with Bavuma adding: "I think it will always be there until we find ourselves in a situation where we get to a final and we come out on the right side of that result.

"Everything was in our hands as a team. We had confidence and belief and the form behind us but we just couldn't do the business. We had opportunities and we just didn't take them."

Mark Boucher, who will now leave his role as South Africa head coach, added: "The more you don't do well in World Cups, I think it does start playing in your head a bit. I think that's just natural.

"I don't think that's been the case of late. We've played in some tight games in World Cups and actually won them. In the past, we've tended to lose those games.

"We were never really in this game here, to be fair. On paper, yes we should have won the game but the game's not played on paper, it's actually played out there in the middle."