Joe Root registered his second successive century of England's Test series against India, finishing unbeaten on 180 as his side gained a first-innings lead of 27; watch day four of the second Test live on Sky Sports The Hundred from 10.15am on Sunday

Root struck his second successive century of England's series against India, finishing unbeaten on 180 as the home side carved out a narrow first-innings advantage of 27 in the second Test at Lord's.

Those performances followed the England captain's stellar efforts at the beginning of the year, when he registered double hundreds in both Sri Lanka and India.

Root's latest innings not only took him beyond 9,000 runs in Test cricket but also raised his current average above the 50 mark - and Atherton feels the 30-year-old's success is a direct result of adjustments he made during the enforced hiatus in 2020.

"I think this is a reward for some incredible work he did in lockdown," said Atherton. "It came at a time when he was 29 and had already had a fantastic career.

"But it just gave him an opportunity to rest, where he's said 'I've got the second half of my career to come and I can go from being a very, very fine player to one of the all-time greats'.

"He asked the analyst to send him every dismissal from the last five years or so, looked at it in great detail and tried to work out where he could go from there. He's reaping the rewards of that.

"He's made a slight technical adjustment now, with that back leg going straight back. That made him less vulnerable to the lbw when the ball is straight. 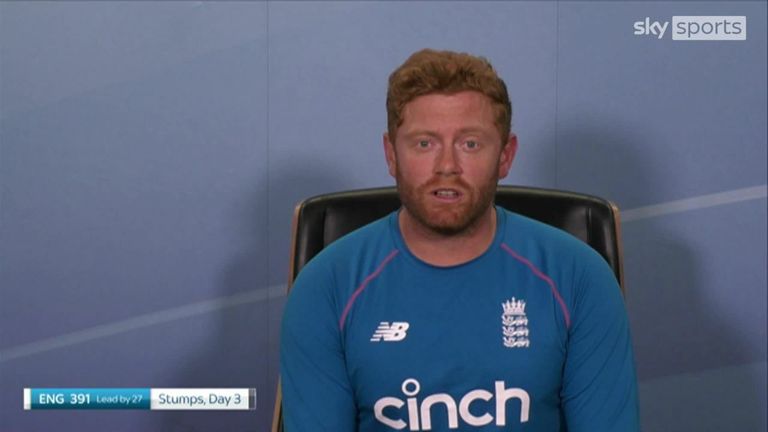 "For three years, he's not been quite at his best at home against seam and pace bowling, but now he's in a golden run of form that started at the beginning of 2021 when England went to Sri Lanka.

"He showed all his great skill on the dust bowls in Asia and now he's got his very best game together in more seam-friendly conditions here at home."

Root's excellence has held a fragile England batting line-up together in the majority of their recent Tests and that was also the case at Lord's, where his innings enabled them to finish on 391 all out.

Atherton - himself a former England captain whose batting was often crucial to his side's prospects - has been particularly impressed by Root's ability to lead his team at the same time as amassing runs.

"The lovely thing is how he doesn't seem burdened at all by the weight of captaincy and expectation at the moment," he added.

"Think of the context of this innings - he came in on a hat-trick ball when India had just got two in two.

"He's the captain who put India into bat and they've put on 127 for the first wicket and made 364 - not a huge score but certainly more than you'd want when you put a side in. Those kind of things impact on you.

"But what he's managed to do brilliantly is compartmentalise it all and put the captaincy to one side. He's Joe Root the batsman, not Joe Root the captain burdened by expectation and pressure and he's playing with great freedom."

Root shared the highest partnership of the innings - 121 for the fourth wicket - with fellow Yorkshireman Jonny Bairstow, who batted well for 57 before Mohammed Siraj, bowling around the wicket, bounced him out.

However, it was another positive display by Bairstow, who has been in and out of the Test side in recent years and has often come to be viewed as a limited-overs specialist.

"He's just come out of The Hundred, playing for Welsh Fire, and hasn't played any first-class cricket at all this season," said Atherton. "But he's managed to adjust and that's to his great credit.

"I thought he played really well [in the first Test] in Nottingham, even though it was only for 29 and 30. He looked by far England's best player after Root, and this was an important partnership again today.

"He's still got that fire in his belly and that desire to play the five-day game. When you've been messed around a bit, as he has, it would be easy to say 'I've got plenty of options in one-day cricket', but clearly he wants to play Test cricket."