"I don't think he wants too much fuss but if there was ever a time for it, it is now. I am sure the ground, the occasion, will help him do that."

By Kalika Mehta at The Oval

England captain Joe Root has hailed Alastair Cook as "phenomenal" as the opener prepares to retire from international cricket.

The 33-year-old will play his last match for the hosts when they face India in the final Test of the summer at The Oval, live on Sky Sports from 10am on Friday.

Cook will depart as England's all-time leading runscorer and as having made the most appearances of any player for the country.

Describing his former skipper, who handed him his debut in the Test side in 2012, Root said: "He's just phenomenal.

"He has had a huge influence on me, he gave me the opportunity to play and as a role model there aren't many people who go about things the way he does.

"He is a very level-headed bloke - Jos summed it up he's the most down-to-earth superstar you'll ever see.

"The way he's always got time for everyone, that is a great quality to have in any walk of life no matter in a high-pressure environment like international cricket, and I'll miss him being around."

A personal highlight for Cook was the 2010-11 Ashes in Australia when he struck 766 runs in the 3-1 series victory over the Baggy Green, picking up the player-of-the-series award for his efforts.

Root recollects watching the opener score runs for fun during that winter two years before being handed his first cap for England in India.

The Yorkshireman admitted that stepping into the same dressing room, at the age of just 21, with a player he admired had been surreal.

"I remember seeing Cook as someone walking into the team and making it look so easy from the get-go at the top of the order, the way he started as he did in India [scoring a century on debut in 2006]," Root explained. 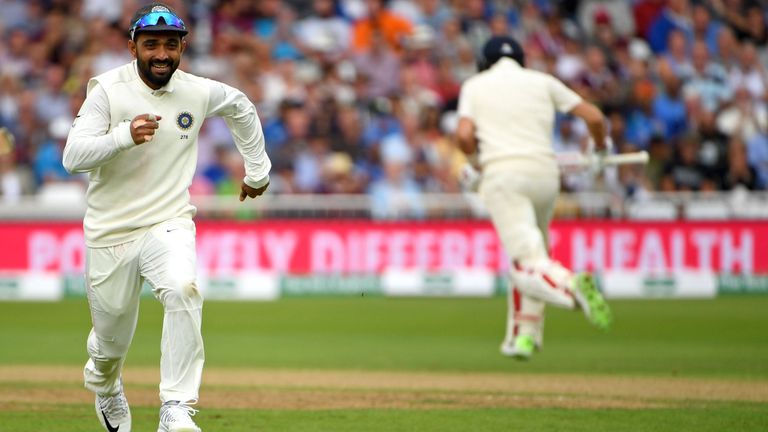 He has been fantastic for England cricket. Credit to him, for the way he has handled his batting and his technique.

"Making my debut I had to pinch myself to be in the same dressing room as - a number of other guys - but Cook in particular. It makes you feel really excited about being part of a team like that.

"To even be able to say I've been involved in playing alongside him - without sounding like everyone else - has been a great honour and I will miss it."

Despite scoring over 12,000 runs for his country, Cook has struggled with the bat recently - having scored just three half-centuries since January 2017 alongside two double-hundreds against the Windies and Australia respectively.

The Essex batsman has a high score of 29 in the four Tests against India so far in the series and following the visitors' victory at Trent Bridge, Cook told Root of his intention to retire.

Although Root confessed he was not expecting the announcement he realised there would be no changing his team-mate's mind and believes Cook can leave the international scene on a personal high.

"I was a little surprised but he was adamant in his decision," Root admitted. "You could see in his face that it was what he wanted and he'd obviously thought it through and was ready for it.

"When you get that impression from someone there is no point trying to talk them around. Now it is about us as a team giving him the opportunity to celebrate in the best way possible.

"That means going out there and winning this game. It would be a fitting way to finish a fabulous career.

"I don't think he wants too much fuss but if there was ever a time for it, it is now. I am sure the ground, the occasion, will help him do that.

"Hopefully he can soak up everything that comes with this week and go out and deliver on the field. It would nice to finish with a century, you never know it might be written in the stars for him."