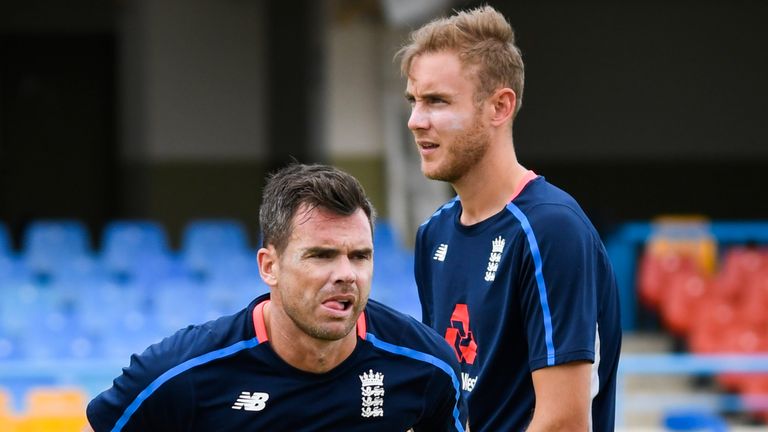 Stuart Broad says his new-ball partner James Anderson is a "great example" for other cricketers as he prepares to play his 150th Test match.

Anderson, 37, will become the second Englishman, after Sir Alastair Cook, and first out-and-out bowler from any country to the milestone when he lines up against South Africa in the first Test at Centurion on Boxing Day, live on Sky Sports Cricket and Main Event from 7am.

And Broad told Sky Sports that his fellow paceman - the all-time leading Test wicket-taker among fast bowlers with 575 scalps in 149 Tests - can carry on for a good while yet.

"It's very special for anyone. It just shows incredible dedication and the mental strength to go through so many ups and downs in your career," Broad said of Anderson's imminent 150th game.

"I am so proud of Jimmy. He is someone who I've looked up to my whole career. He has guided me through different periods and is a great example for anyone coming into the game of how to go about your business."

Anderson is due to play in just his second Test since February having limped out of the Ashes opener at Edgbaston in August with a calf injury and subsequently missing the 1-0 series defeat in New Zealand.

However, the seamer picked up a combined four wickets across England's two warm-up fixtures in South Africa, including three in the weekend draw against South Africa A in Benoni.

"I'm sure there were times when he thought 150 Tests might be slightly out of reach so for him to make this landmark is incredibly special," added Broad. "By the look of him, he has a lot more left in him."

Former South Africa all-rounder Jacques Kallis played 166 Test matches but Anderson will be the first front-line bowler, either seamer or spinner, to 150 games, an achievement Michael Atherton has called "astonishing".

"You can imagine spinners getting there but for a fast bowler to play 150 Test matches is astonishing," the former England captain said of Anderson who debuted for England at Lord's in 2003 against Zimbabwe.

"Joe Root spoke very highly of him in the press conference, saying that for a 37-year-old who has played 149 Tests and taken more wickets than any other seamer in Test history to have the drive to go away, get himself fitter and improve, speaks volumes for him as a cricketer.

"He sets a brilliant example to any young player in and around that England team of how you need to be in order to get your body right for Test cricket."

Nasser Hussain, captain when Anderson first played for England, added: "I knew we had someone incredibly talented.

"I think he was described as the most skilful bowler in world cricket a few years ago by David Saker and you can see that.

"The one word everyone will feel on Boxing Day morning is respect for a bowler [to achieve that feat].

"You speak to Stuart Broad, look at Mark Wood and look at their bodies. Look at Sir Ian Botham, watch dearly departed Bob Willis, who has just left us, try and pick up a golf tee from the ground.

"Bowling is hard work and for Jimmy to play 150 Test matches as a fast bowler - I have the utmost respect for that."

Watch the first Test between South Africa and England, at SuperSport Park in Centurion, live from 7am on Boxing Day on Sky Sports Cricket and Sky Sports Main Event.