"You just felt, had he failed here, he might not get too many more opportunities to show what he can do. He has just enhanced his claim for all formats"

Joe Denly's 87 in the opening ODI against South Africa could prove crucial as he aims to retain his Test place and push for a regular spot in England's white-ball squads, says Rob Key.

Denly averaged only 30 in the 3-1 Test series win over the Proteas - mirroring his career average in the longest form - and he is sweating on his spot ahead of the March matches in Sri Lanka.

The 33-year-old is also hoping to make England's T20 World Cup side in Australia later this year and showed his one-day skills by top-scoring in Eoin Morgan's side's defeat in Cape Town on Tuesday.

"I thought it was an important knock for him," said Sky Sports expert Key, a former team-mate of Denly's at Kent. "In the Test team, he's almost the one people are starting to focus on

"There have been a couple of stories that he's going to be the one to miss out on the Sri Lanka tour, that Jonny Bairstow might come back in, even though that seems a little premature to me.

"So an innings like that is important, especially on a pitch like that. There wasn't a lot of turn but batting was not easy and he had to find a way to manipulate the spinner.

"You just felt, had he failed here, he might not get too many more opportunities to show what he can do. He has just enhanced his claim for all formats."

Denly hit his highest ODI score, and third fifty in the format, as England rallied from 131-6 to post 258 at Newlands, only for South Africa to top that total with 14 balls to spare, thanks principally to Quinton de Kock (107) and Temba Bavuma (98) putting on 173 for the Proteas' second wicket.

"He will have been desperate for a hundred," Key added of Denly, who is yet to notch a ton for England in any format, with a best of 94 in the final Ashes Test of the 2019 series, at The Oval.

"It's almost becoming a running theme now - lots of starts, played well, but he must be so desperate for that three-figure score."

Denly struck six fours and two sixes from the No 5 spot and shared a seventh-wicket stand of 91 with Chris Woakes in the latter's 100th ODI to get England up to a total he felt may have been a test for the hosts, who can now wrap up a series victory with a game to spare in Durban on Friday. 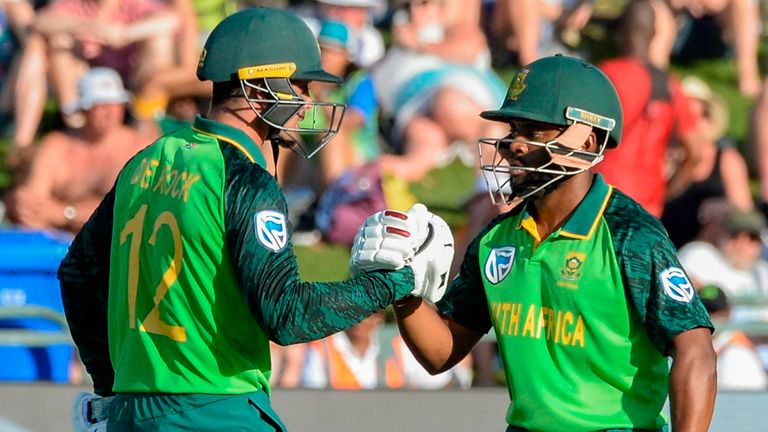 De Kock is a sensational player. He was sensational in the Test matches and his ODI record is pretty good. Him and Bavuma played pretty well under not too much pressure. They didn’t have to go chasing the game and ran really well as well. We weren’t able to build pressure

"It's nice to get away in the first ODI but I never felt at my fluent best," he added. "I came off reasonably happy I had got us to a score we could potentially defend so it was disappointing not to be on the winning side.

"I had to do quite a lot of hard work out there but I think I could have got hold of a few cutters a bit more and got us maybe 10, 15, 20 more. I think we would have been right in the game then.

"South Africa worked it out pretty quick, went to their cutters early on, made it tough to score and didn't bowl many release, boundary balls. There weren't many momentum-shifters."

Watch the second ODI between South Africa and England, in Durban, live from 10.30am on Friday on Sky Sports Cricket and Main Event.