India's development, the T20 World Cup legacy and the summer of cricket discussed in our Sky Cricket Podcast Women's Special 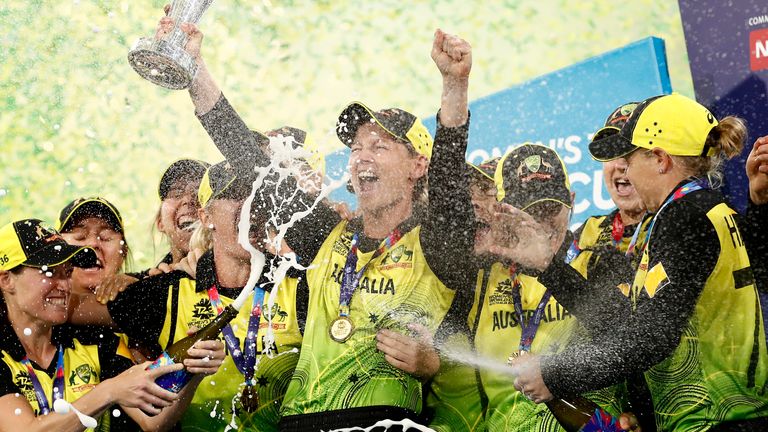 England captain Heather Knight told the Sky Sports Cricket Podcast she is hopeful the success of the T20 World Cup final will continue in the women's game, which she says is strengthening all the time.

Over 86,000 fans - a record for a women's cricket match - watched inside the MCG as hosts Australia beat India on March 8 in a game book-ended by performances from American singer Katy Perry.

England were knocked out a few days earlier after their semi-final with India was washed out - India advancing after topping their group with Knight's side having finished second to South Africa in theirs.

Knight admitted the final was "bittersweet" but "amazing" and is enthused at how other nations are closing the gap on the top teams, including tournament debutants Thailand.

"I went to the final. It was bittersweet as missing out on a place in the final sucked, to be honest, but I wanted to be there," said Knight, who spoke on the podcast alongside host Ebony Rainford-Brent, plus fellow guests Isa Guha, Lydia Greenway and Nasser Hussain.

Listen to the podcast in the player above or download:

"I knew it was going to be an amazing day and it was. It was tough watching but what a day! As soon as Katy Perry came out with those pink glittery bats you thought, 'wow, this is pretty unique for women's cricket'.

"There were 86,000 people and hopefully it's not just for one day and is something that can continue for the future of the game.

"I was just gutted we weren't able to take it past the semi-finals as we were starting to hit our straps and find some form.

"I think the standard has really improved over the last few years. The best standard probably wasn't shown early in that World Cup - it felt like there were a lot of nerves, a lot of tentative cricket with it being such a big tournament and there were some upsets.

"I loved Thailand's 150 against Pakistan, some of the shots on the highlights reel were outstanding, some of the best you will see.

"A criticism of the women's game has been that the top three or four teams have pulled ahead so that balance in a world event was really nice."

Some of the game's young stars impressed in the tournament, including 20-year-old England spinners Sophie Ecclestone and Sarah Glenn, who snared eight and six wickets respectively.

"It shows you what the game is going to be like over the next 5-10 years if those guys keep going as they are," added Knight

"Sophie and Sarah were very impressive, especially in the middle overs. Sophie was denied the chance to bowl at Shafali Verma but what a match-up that would have been.

"Shafali is a real talent, a scary one to have to captain against because of how destructive she is and how she seems to have no fear. She has learnt really quickly as well which is scary from an opposition point of view."

- Lydia Greenway says the tournament has inspired all cricket fans, not just women, and feels teams like South Africa have advanced due to strong domestic competitions around the world.

- Nasser Hussain loved to see what it meant to people involved and really enjoyed how excited Thailand were in their first major tournament.

- Our guests examine what the summer of cricket may look like with coronavirus halting the game.

- Heather Knight discusses batting with Nat Sciver and how she is keeping busy amid the pandemic, including through Sophia Dunkley's quiz.

- Isa Guha is cleaning her study, working out and cooking - but what his her social-media challenge for Ebony Rainford-Brent?