Chasing a massive 225 to win, Dawid Malan (68 off 46 balls) and Jos Buttler (52 off 34) fired in a century stand, but England ultimately fell to a convincing defeat as Buttler's dismissal prompted a collapse of seven wickets for 44 runs

England collapsed to a 36-run defeat to India in the decisive fifth T20 international in Ahmedabad, seeing the home side clinch a 3-2 series win.

India posted a massive score of 224-2 from their 20 overs after again being inserted by Eoin Morgan and, though Dawid Malan (68 off 46 balls) and Jos Buttler (52 off 34) both fired in a century stand for the second wicket, England ultimately collapsed to 188-8 in reply.

On undoubtedly the best batting surface of the series, India were aggressive from the outset, with new opening pair Rohit Sharma (64 off 34 balls) and Virat Kohli (80no off 52) putting on 94, scoring at a rate of greater than 10 an over.

Both went through to fine fifties, while Suryakumar Yadav (32 off 17) and Hardik Pandya (39no off 17) pitched in with quickfire cameos late on - the former's innings only ended by a stunning relay boundary catch from Chris Jordan. 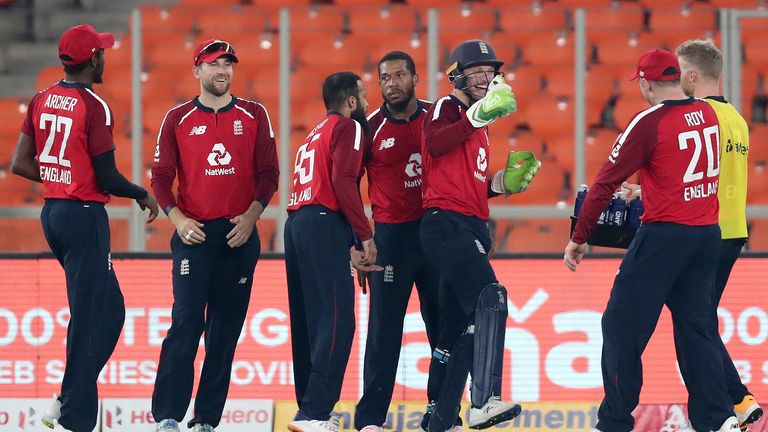 Jason Roy (0) departed to the second ball of the England run-chase, clean-bowled by Bhuvneswhar Kumar (2-15), who later returned to claim the key wicket of Buttler in a 13th over that cost just three runs and turned the game in India's favour.

Buttler's dismissal was the first of seven wickets to fall for 44 runs as England stumbled their way to a series defeat.

Morgan earlier was successful for a fourth time at the toss and, despite losing Thursday's fourth T20 when chasing and faced with a belting batting track, the England skipper had no hesitation in again asking India to bat first.

But a change at the top of the order for India had the desired effect. With the out-of-form KL Rahul dropped, Kohli moved himself up to open with Rohit, who was back to his blistering best in the powerplay.

Rohit gave warning to both his intent and his fine form as he cracked two boundaries through the covers off Jofra Archer's second over and then launched Adil Rashid (1-31) over the deep midwicket fence in the third.

That was one of five maximums in Rohit's stunning knock as India smashed 60 from the six-over powerplay and he raced through to a 30-ball half-century. 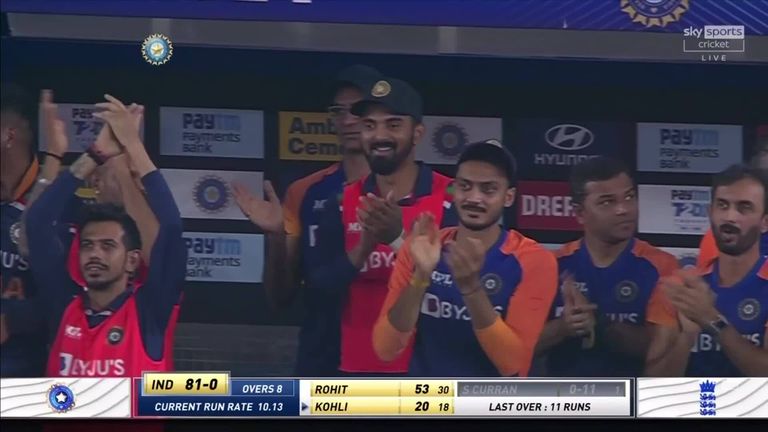 Ben Stokes (1-26) provided the all-important breakthrough for England, deceiving Rohit for pace with a cutter that clattered into his stumps. But any hopes that the wicket would stall the Indian innings were soon dispelled when Suryakumar - fresh from firing fifty in his maiden T20I innings - blasted back-to-back sixes off Rashid in the next over and then took Jordan for three boundaries in succession in the 12th.

Jordan would take his revenge with a ridiculous boundary catch to see the back of Suryakumar not long after, sprinting round on the deep midwicket fence to take an effortless one-handed catch before then relaying it to the watching (and laughing in astonishment) Jason Roy as Jordan's momentum took him over the rope.

Kohli, happy to play second fiddle up to this point - having faced only 31 deliveries by the end of the 14th over - then put his foot on the throttle along with Pandya at the back-end of the Indian innings. 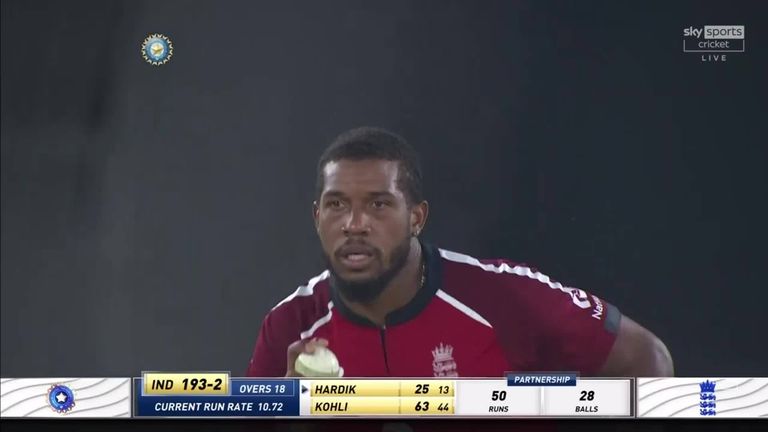 The pair put on 78 in the final six overs, with Kohli cruising to a 28th T20I fifty and Pandya, who has struggled against the short ball during the series, this time feasting on anything banged in halfway down - the allrounder sending two such deliveries from Jordan the distance in the 19th over.

Chasing such a stiff target, England's innings got off to the worst possible start as Roy was sent packing second ball by Bhuvneshwar, bowled when looking for the big swing to the deep midwicket boundary.

Malan, his place in this England side under pressure, came out swinging and plundered 14 runs from three balls in Pandya's second over. 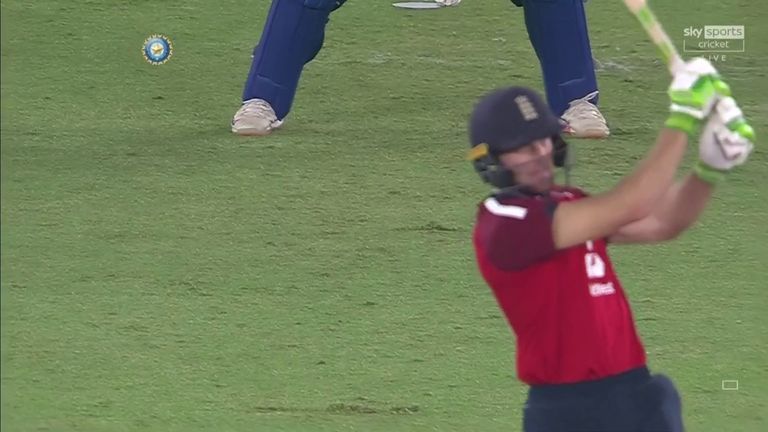 Buttler, meanwhile, found Rahul Chahar to his liking, smashing the legspinner for three of his four sixes as he and Malan fired 62 from the powerplay on their way to a fine century stand.

Malan raced through to a 33-ball fifty, while Buttler brought up a half-century of his own off 30 deliveries, though he then holed out at wide long-off in Bhuvneshwar's 13th over.

That proved to be the turning point in the game, with Jonny Bairstow (7), Morgan (1) and Ben Stokes (14) all dismissed cheaply as the required rate drastically climbed, with Malan one of three to fall to Shardul Thakur (3-45).

Watch the first of three one-day internationals between India and England, live on Sky Sports Cricket from 7.30am on Tuesday.