Jonny Bairstow smashed 94 from 66 balls at the top of the order, sharing in a 135-run opening partnership with Jason Roy (46 off 35), but the latter's dismissal in the 15th over triggered a collapse as the tourists stumbled their way to 251 all out in pursuit of 318 to win

India take a 1-0 lead in the three-match ODI series with England after a middle-order collapse from the touring side saw them sputter to a 66-run defeat in the first game in Pune.

Chasing 318 to win, Jonny Bairstow smashed 94 from 66 balls at the top of the order for England, sharing in a 135-run opening partnership with Jason Roy (46 off 35). But, with the pair rattling along at a rate close to 10 runs an over, Roy's departure in the 15th sparked a steady clatter of wickets and the visitors were ultimately skittled for 251 in 42.1 overs.

Earlier, an Krunal Pandya (58no off 31) impressed on his ODI debut as he and KL Rahul (62no off 43) each fired fifties in reaping 112 runs from the final 10 overs of the Indian innings.

The home side had too suffered a mid-innings wobble off the back of a century stand for the second wicket between Shikhar Dhawan (98) and Virat Kohli (56); Ben Stokes (3-34) and Mark Wood (2-75) chipped away with important wickets to reduce India to 205-5 before Krunal and Rahul came together and took over.

Eoin Morgan had put India in to bat after again winning the toss, and though Dhawan and Rohit Sharma (28) built a solid foundation for the team, their opening stand was a rather sedate one - certainly in comparison to the blistering batting on display later on from Bairstow and Roy.

It proved to be a rather innocuous delivery that brought about the initial breakthrough for England in the 16th over, with Rohit chasing a short, wide delivery from Stokes and nicking behind.

Kohli came in and, gradually, he and Dhawan went up through the gears, each bringing up fine fifties. But, just as they looked on course to steer India to a massive total, the innings lost its way. Moeen Ali, who had earlier dropped Dhawan on 59, made no mistake this time in holding onto a chance at deep square-leg to dismiss Kohli; Shreyas Iyer (6) didn't hang around long and was Wood's second victim as he clothed one to cover, while Morgan clung on to a sharp catch at midwicket to see Dhawan depart two agonising runs short of an 18th ODI century.

When Hardik Pandya (1) nicked Stokes to Bairstow at slip off Stokes in the 41st over, India had suddenly stumbled their way from 169-1 to 205-5. But Krunal, far from being daunted on debut, signalled his intent by whacking Sam Curran for a trio of boundaries in the next over, on his way to seven for his innings, plus two maximums. 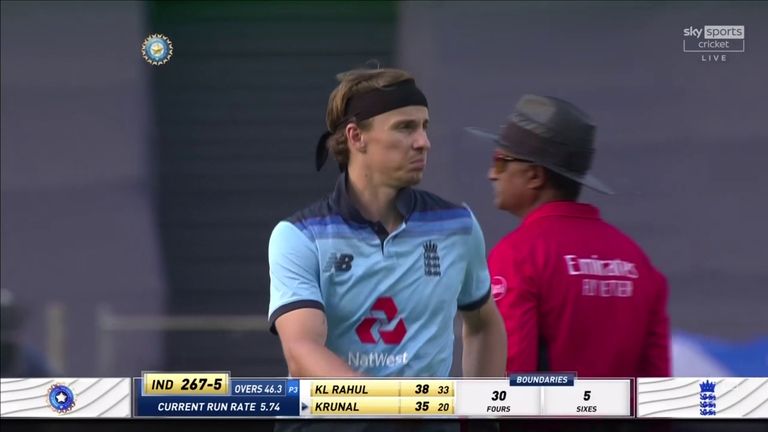 Rahul - desperately out of form during the T20 series - also finally fired, hammering four sixes and as many boundaries in an enterprising innings to see India over the 300 mark and set England a more than challenging total.

Of great concern to the visitors heading into the run-chase was that their captain had cut the webbing of his right hand while in the field, and Sam Billings had also injured his shoulder when attempting to save a boundary. Both were passed fit to bat and would ultimately be required, but it briefly looked like Bairstow and Roy might avoid that eventuality with their scintillating opening stand.

With Bhuvneshwar Kumar bowling tidily at one end, the pair feasted on fast-bowling debutant Prasidh Krishna at the other, Bairstow blasting 22 from one of his early overs.

It seemed like no bowler was safe, as Shardul Thakur, Krunal and Kuldeep Yadav all subsequently tried to break the partnership but only succeeded in going the distance.

Kohli turned back to Prasidh (4-54) and it had the desired effect, with Roy cutting the seamer straight to backward point. England couldn't halt the steady stream of wickets thereafter.

Two overs later, Stokes' curious 11-ball knock ended with him chipping Prasidh to cover. Morgan then could and really should have been out next ball, only for Kohli to drop his counterpart at slip. 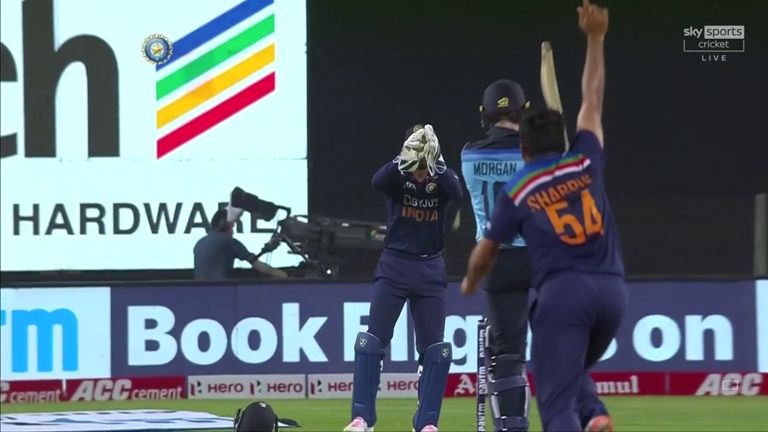 It was Thakur (3-37) who ultimately accounted for the England skipper, bouncing him out an over after claiming the key wicket of Bairstow, caught on the deep midwicket boundary. Three balls after Morgan's departure, Thakur trapped Jos Buttler (2) lbw and England were reeling.

Moeen (30) briefly resurrected the innings, finding handy support first from Billings (18) and then Sam Curran (12) but, even though the tourists were well ahead of the required rate, they just couldn't halt the flow of wickets.

Billings scooped one straight to the fielder at cover, while Bhuvneshwar (2-30) returned to claim Moeen with a beauty that just nipped away a touch to take the outside edge through to slip, and he then added Adil Rashid for a duck either side of Sam Curran becoming Krunal's maiden ODI wicket.

Tom Curran (11) would be the final wicket to fall, with England 47 balls shy of batting out their full 50 overs and 66 runs short of victory.

Watch the second one-day international between India and England, live on Sky Sports Cricket from 7.30am on Friday.