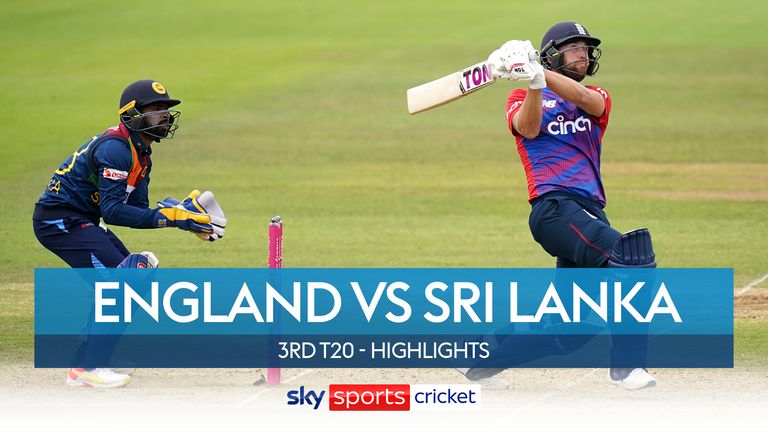 England inflicted another heavy defeat on Sri Lanka, winning the third T20 international at The Ageas Bowl by 89 runs to wrap up a 3-0 series sweep.

Dawid Malan (76 off 48 balls) and Jonny Bairstow (51 off 43) both fired fifties as they shared in a century opening stand, and though England's innings somewhat stumbled to a finish, their total of 180-6 proved well out of reach for the visitors.

Dushmantha Chameera (4-17) claimed career-best T20 figures as England lost five wickets for 19 runs inside four of their final five overs. But Sri Lanka never threatened in reply, crumbling to 91 all out and a series whitewash.

The tourists did succeed in winning the toss for a third-straight time, and on this occasion chose to bowl first. But a change in fortunes was not forthcoming as England's new-look opening partnership, with Jos Buttler ruled out of the series and Jason Roy rested with a tight hamstring, got off to a flier.

Malan struck the first six of the innings, in the fourth over, with a beautifully-timed clip off Binura Fernando over deep mid-wicket. Isuru Udana's wayward fifth, which included eight runs given to wides, then went for 17.

The 50 partnership between Malan and Bairstow came up shortly after the conclusion of the six-over powerplay, while the latter went through to his own personal half century, off 41 balls, in the 10th over.

🗣 @nassercricket: "He did the hard bit and then dropped the dolly - he's hoping that this is six!"

Hasaranga with a brilliant attempt, but also a dodgy drop in the deep 😬

Bairstow was first very nearly caught at deep mid-wicket by Wanindu Hasaranga, who initially did brilliantly to nearly stop the ball from going for six, only to then drop a dolly of a relayed catch to himself. The Yorkshireman then crashed four through the covers to notch his seventh T20I fifty.

Bairstow did not hang around much longer, bowled by Udana in the 12th over, but Malan followed him through to his own half century - off just 30 deliveries - soon after and then freed his arms in the 15th, smashing Hasaranga for the third and fourth sixes of his fine innings. 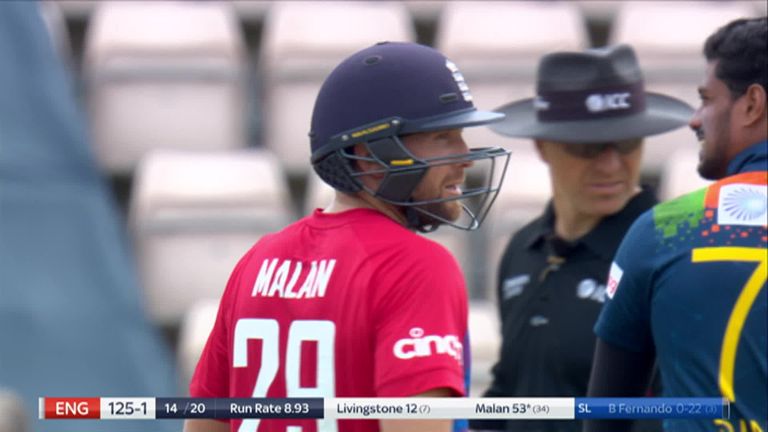 But then, just as England were looking primed to post a score of 200 plus, they suffered a mini collapse in the next four overs, with Fernando first picking up Liam Livingstone (14) caught at cover, and Chameera claiming Sam Billings (2) and Eoin Morgan (1) in one over, and then Malan and Moeen Ali (7) in his next.

However, another expensive Udana over to end the innings undid the hard work of the previous four overs somewhat, with 17 scored from it seeing England up to 180. And that proved well out of Sri Lanka's reach.

Accused of lacking a little intent at times during the first two T20s of the series, the visiting side were guilty of over-correcting in this game, with their batsmen wildly swinging and missing at numerous deliveries and their reckless abandon resulting in many a dismissal.

After drilling the first ball of the innings through the covers for four, Danushka Gunathilaka (4) fell to David Willey's second, wafting at one and nicking to Malan at second slip.

Chris Woakes (1-9) picked up Kusal Perera (3) cheaply, and then Kusal Mendis was guilty of getting similarly carried away like Gunathilaka. Having smashed Willey for six straight down the ground, he got a faint edge on his next ball behind.

Oshada Fernando showed flashes before falling for 19 to Sam Curran (2-14), who also accounted for Niroshan Dickwella (7), either side of a Dasun Shanaka (7) run out.

Malan bagged another in the slips to see off Hasaranga (1) after Chris Jordan (1-13) found his edge, while Willey (3-27) returned to claim his third as Udana's day ended with a duck.

Morgan bowled his seamers exclusively until turning to spin in the 17th over, and it was Livingstone and Moeen who ultimately mopped up the tail to secure a third emphatic win of the series for England.

Watch the first one-day international of the three-match series between England and Sri Lanka, live on Sky Sports Cricket from 10am on Tuesday.