England take 4-2 lead in multi-format series against India after thumping eight-wicket win in Bristol; Tammy Beaumont (87no) and Nat Sciver (74no) take England to victory target of 202 with 91 balls to spare; watch second ODI live on Sky Sports Cricket from 1.30pm on Wednesday 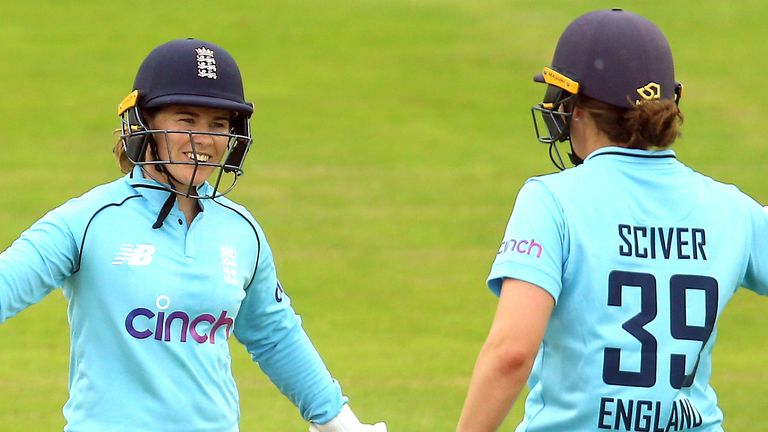 Tammy Beaumont and Nat Sciver shared an unbroken partnership of 119 as England Women coasted past India's go-slow total of 201-8 to win the first ODI in Bristol by eight wickets and take a 4-2 lead in the multi-format series.

England opener Beaumont displayed terrific intent, timing, footwork and power in a run-a-ball 87, while Sciver was also extremely impressive and aggressive as she made 74 from as many deliveries and England cruised home with 91 balls to spare.

India, in contrast, batted at a pedestrian rate, with 181 dot balls in an innings which was underpinned by captain Mithali Raj's unambitious 72 from 108 deliveries, her 56th ODI fifty. 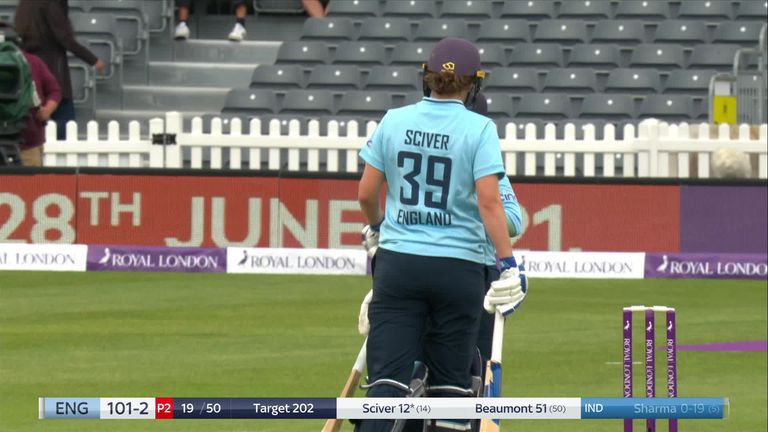 Left-arm spinner Sophie Ecclestone (3-40) - who bowled Raj in the 46th over - and seamers Katherine Brunt (2-35), Anya Shrubsole (2-33) and Kate Cross (1-23) spearheaded England's attack against the ambling tourists, with Brunt feeling India were 50 runs short of par.

Beaumont and Sciver's proactive knocks led England's clinical reply - Sciver punishing India for dropping her on 12 - with their 116-ball stand seeing England move ahead in the multi-format series, which continues with the second of three ODIs in Taunton on Wednesday. 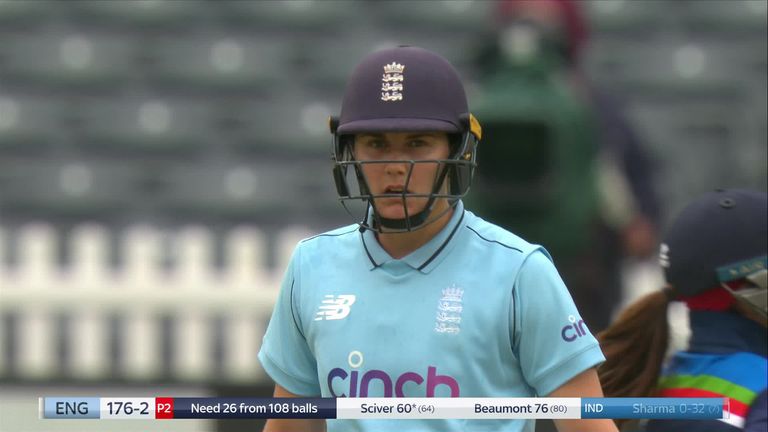 Lauren Winfield-Hill struck 16 from 10 balls after opening for England in an ODI for the first time since 2017, while skipper Heather Knight scored 18 from 30, playing second fiddle in a 59-run partnership with Beaumont for the second wicket.

Knight - whose side drew the one-off Test with India at the same venue last week - will be disappointed she was not able to kick on with the bat but delighted with her team's frugal bowling and brilliant run chase.

India made things pretty easy at times for England, going into their shell with the bat once Shafali Verma (15 off 14) and Smriti Mandhana (10 off 25) were dismissed by Brunt and Shrubsole respectively in the powerplay.

Raj took 96 balls to reach her half-century and although she shared stands of 56 and 65 with Punam Raut (32) and Deepti Sharma (30) respectively, those slow-scoring alliances did not hurt England.

Raj and Sharma both began to accelerate around the 40-over mark when India were 134-4 but neither were able to bat through to the end of a prosaic team innings, one in which Harmanpreet Kaur made just a single before snicking Ecclestone behind.

India were unable to score another boundary once Raj was castled by Ecclestone, losing Pooja Vastrakar (15 off 17) lbw to Ecclestone and Taniya Bhatia (7) out stumped by Amy Jones off Brunt, before scrambling over 200 in the final over.

England then made mincemeat of that total, with the sides' first ODI against each other since the 2017 World Cup final at Lord's in stark contrast to that nail-biting affair four years ago.

India were only able to remove Winfield-Hill - caught behind off Jhulan Goswami - and Knight - bowled by a beauty from Ekta Bisht as she advanced and looked to whip into the on-side.

England captain Knight is on her way after being bowled by Bisht. England are 83/2 chasing 202 to win the first ODI.

They should have pouched Sciver on 12 but Ekta Bisht could not cling on at short fine leg when the England player top-edged a sweep off Harmanpreet.

Beaumont looked primed for an eighth ODI century at one stage but Sciver's acceleration towards the death scuppered those hopes.

Beaumont drew the sides level by blazing Harmanpreet for six in the 35th over, before a wide next ball sealed the most comprehensive of England victories.