England Women collapse to defeat in second T20I against India

England lose six wickets for 31 runs as they stumbled to an eight-run defeat to India in the second T20 international at Hove; the three-match series now tied at 1-1, while the overall multi-format score is now 8-6 to the hosts with one game to play 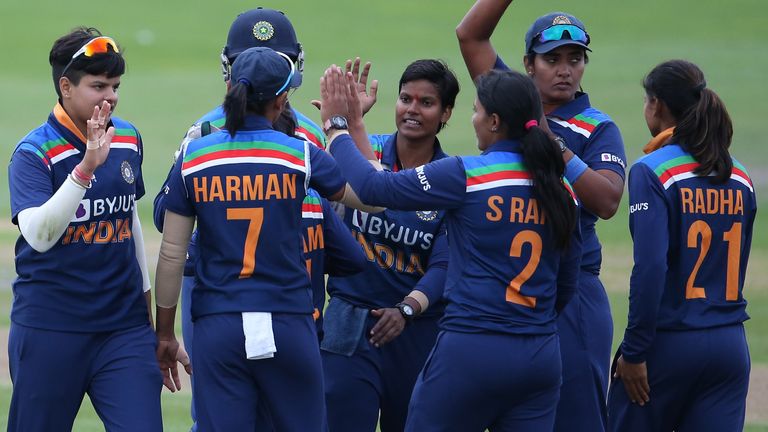 A late England batting collapse gifted India an eight-run win in the second T20 international at Hove to keep their multi-format series alive.

Chasing 149 to win, England were cruising towards their target at 106-2 in the 14th over, before the wicket of Tammy Beaumont (59 off 50 balls) sparked a run of six wickets for 31 runs.

India's win sees the three-match T20 series tied at 1-1, while the overall multi-format score is now 8-6 to the hosts with one game to play. India can tie things up with a win in Chelsmford on Wednesday.

Following the wicket of Beaumont, lbw to Deepti Sharma (1-18), England then lost captain Heather Knight (30 off 28) to a bizarre run out - deflected off the boot of Sharma - to the very next delivery.

Wow! Heather Knight is run out for 30 via a deflection off the boot of bowler Sharma!

England lose two in two - after Beaumont (59) falls the ball before. #ENGvIND 🏴󠁧󠁢󠁥󠁮󠁧󠁿🇮🇳

Sophia Dunkley (4) quickly came and went, Poonam Yadav (2-17) claimed Amy Jones (11) and Katherine Brunt (5), while Mad Villiers (2) was the fourth England batter to be run out when she fell in the final over.

Earlier, after Knight won the toss and inserted India, 17-year-old star Shafali Verma (48 off 38) produced a dazzling display with the bat in a 70-run opening stand with Smriti Mandhana (20 off 16).

The highlight of Verma's stunning knock was the way she took apart veteran England fast bowler Brunt (0-34), smashing five consecutive boundaries from her second over.

Freya Davies (1-31) eventually broke the partnership with the wicket of Mandhana in the ninth over, while Villiers (1-9) claimed the key scalp of Verma, holing out to long-on, two balls later.

India captain Harmanpreet Kaur (31 off 25) rebuilt with Sharma (24no off 27), but once again there were suggestions that the touring side were not showing enough intent with the bat as England began to reign the innings in.

Kaur attempted to address that by smashing 10 off two Glenn deliveries in the 16th over, before then falling to the third. Nat Sciver then picked up Richa Ghosh (8), caught and bowled, to end the 18th as India ultimately posted a score of 148-4.

It looked to be a below-par total as Beaumont got the England reply off to a fine start, even in the face of the early departures of Danni Wyatt (3), caught at mid-off, and Sciver (1) run out.

Beaumont and Knight looked to be pacing the run chase perfectly, putting on 75 for the third wicket, with the former going through to a ninth T20I fifty off 39 balls.

But when Beaumont fell in the 14th, the England chase subsequently fell apart and they now need to win on Wednesday to clinch the series.

Watch the third T20 international between England Women and India, live on Sky Sports Cricket from 6pm on Wednesday.