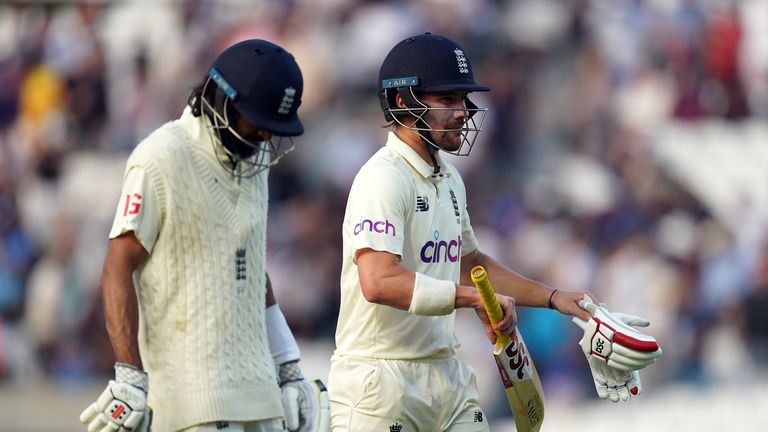 England need a further 291 runs on day five to complete their record Test chase of 368 and take a 2-1 series lead over India after making a steady start on the fourth evening at The Kia Oval.

Openers Haseeb Hameed (43no) and Rory Burns (31no) guided the hosts to 77-0 from 32 overs by stumps to raise hopes of an unlikely victory, albeit that a draw, followed by an India win, is the most probable result.

India had earlier rallied from 312-6 to 466 all out in their second innings, with No 8 batter Shardul Thakur (60 off 72 balls) frustrating England with a second flowing fifty of the game in south London.

India led by just 213 once Virat Kohli (44) was sixth man out, but Thakur and Rishabh Pant (50 off 106) shared a century stand before tailenders Umesh Yadav (25 off 23) and Jasprit Bumrah (24 off 38) played swashbuckling cameos as the tourists amassed 154 runs for their final four wickets.

Thakur had also proved England's nemesis with the bat in the first innings, with his rollicking 57 off 36 balls lifting India from 127-7 to 191 all out and his runs in both knocks could prove crucial come Monday evening. England need to top the 362 they managed at Emerald Headingley in the 2019 Ashes when Ben Stokes scored a quite remarkable unbeaten 135 in a one-wicket win over Australia.

England do not have Stokes this time - the all-rounder is still taking a break from the game to prioritise his mental wellbeing - but they do have a positive start, Joe Root to come, an extremely flat Oval surface underfoot and no Ravichandran Ashwin to contend with.

The highest successful Test run chase at The Oval is the 263-9 England scored against Australia in 1902, while only four times in first-class history at the ground has a side chased more than 350 in the fourth innings.

On this pitch, though, there is a chance.

Chris Woakes (3-83) gave England a fourth-morning pick-me-up with wickets in his first two overs after James Anderson (1-79) and Ollie Robinson (2-105) had plugged away without success for 45 minutes.

Woakes trapped Ravindra Jadeja (17) leg before with his second delivery - that ending a 59-run stand with Kohli for India's fourth wicket - and then dismissed Ajinkya Rahane (0) in similar fashion with his 10th, having seen the latter successfully overturn an lbw call a few deliveries earlier.

England had their tails up at 293-6 and even more so when Kohli clipped Moeen to Craig Overton at slip as his run without a Test ton extended to 21 knocks, by far the longest barren stretch of his career - India were teetering but Pant, Thakur, Umesh and Bumrah rallied. 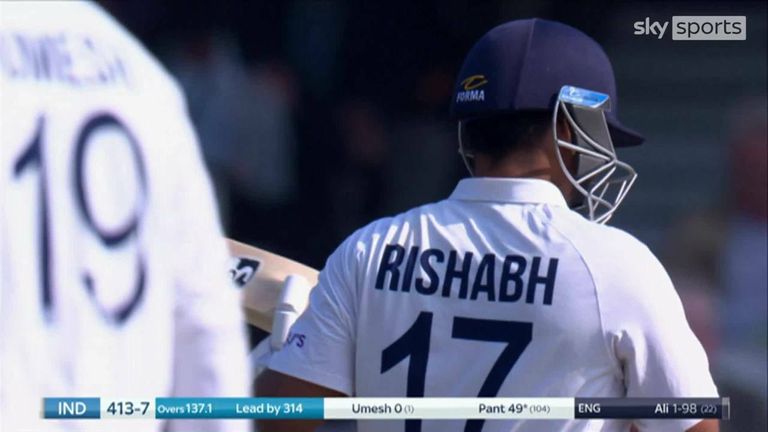 Thakur was the aggressor in his partnership with Pant, striking seven fours and a six en route to a 65-ball fifty - by no means sluggish but 34 deliveries slower than his 31-ball effort first time around, which is the quickest half-century ever in a Test match in England.

Pant's fifty came from 105 balls but he should have been run out on 37 after a mix-up with Thakur, only for Moeen to miss with his shy at the stumps at the wicketkeeper's end and Hameed to then fumble while backing up with Pant still well short of his crease.

Root turned to seamers Anderson and Robinson in the hunt for wickets but it was then he and fellow spinner Moeen who removed India's set batters in the space of five deliveries - Thakur edging Root behind to Overton and Pant slamming straight back to Moeen.

India still added 52 more runs from that point, with Bumrah firing four fours and Umesh two sixes and a four against an increasingly-tired England attack before being caught off Woakes and Overton respectively after tea.

India, though, created little with the ball at the backend of day four.

There was temporary excitement when Kohli's men thought left-arm spinner Jadeja might have had Hameed caught at silly point off his boot but replays soon showed the ball had hit the ground.

Late on, an lbw review against the same batsman came in vain with Mohammed Siraj's delivery set to bounce over the stumps.

Watch day five of the fourth Test between England and India live on Sky Sports Cricket and Sky Sports Main Event from 10.15am on Monday.