England beat New Zealand by 203 runs in the fifth ODI to claim a 4-1 series win; Tammy Beaumont led the way with her eighth ODI hundred as the home side posted 347-5; New Zealand were bowled out for 144 in reply as Kate Cross and Heather Knight claimed three wickets apiece Tammy Beaumont scored her eighth one-day international hundred as England ended their summer with a crushing 203-run victory over New Zealand at Canterbury.

Beaumont made 102 to help England up to a commanding 347-5, with Amy Jones making 60, Lauren Winfield-Hill 43 and Danni Wyatt adding a rapid unbeaten 43 from 20 balls to end the innings.

It was the most runs the White Ferns had ever conceded in an ODI innings and they never threatened to chase it down, slumping to 66-5 before they were eventually bowled out for 144 in the 36th over with three wickets apiece for Kate Cross (3-44) and skipper Heather Knight (3-24).

England finish as 4-1 series winners and sign off in style in their last engagement before the winter's Ashes series in Australia.

New Zealand opted to chase on a good surface for batting and only had themselves to blame for the lack of early wickets as they dropped Winfield-Hill three times in the opening nine overs.

Lauren Down shelled two chances at backward point off Sophie Devine, in between which Winfield-Hill pulled Lea Tahuhu for six, while Katey Martin grassed a regulation catch behind after Molly Penfold had found the outside edge.

Those were the first four of seven dropped catches, of varying difficulty, from New Zealand throughout the innings with a number of ground-fielding errors also helping England up to their imposing target.

For all New Zealand's generosity in the field, England still needed their batters to take advantage and they did just that with Beaumont and Winfield-Hill putting on 95 for the first wicket before the tourists finally held onto a catch to remove the latter at the fifth time of asking.

Knight, the match-winner in the fourth ODI with a brilliant hundred, departed without scoring but any brief opening there might have been for New Zealand was swiftly closed by Beaumont and Nat Sciver.

The pair were together for 11 overs, adding 69 runs in that time with Beaumont gradually moving through the gears and Sciver striking the ball superbly after a slow start.

Hannah Rowe broke the partnership with a ball that nipped back to trap Sciver (39 from 38 balls) lbw but it proved little more than a hiccup for England as Jones came in at 165-3.

The wicketkeeper-batter took a couple of overs to find her rhythm but once she did, New Zealand had no answer as she raced to a 36-ball half-century, getting there by following up a striking shot over extra cover for six with a four through the leg side.

Meanwhile, Beaumont had kicked on again, looking imperious as a flurry of boundaries over the off side took her into the 90s and she celebrated a second international hundred on her home ground after nudging to leg and scampering back for two. 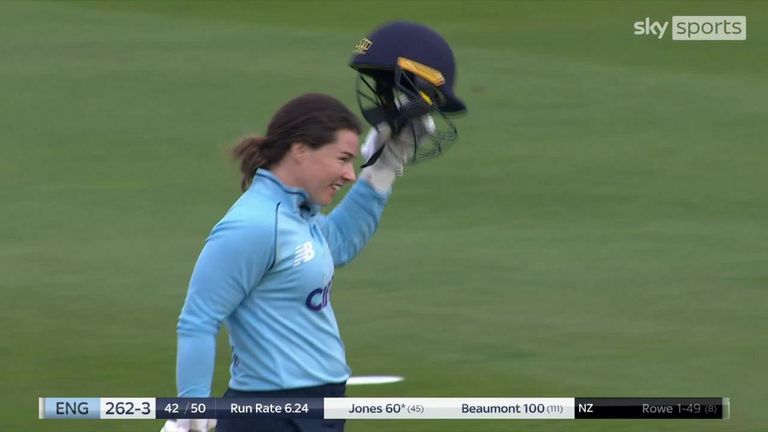 Jones fell at the start of the next over and when Beaumont's fine knock came to an end 10 balls later, England's innings was in danger of falling away.

Instead, the Canterbury crowd were treated to 6.2 overs of brutal hitting from Sophia Dunkley (33no from 25) and, in particular, Wyatt that saw the pair plunder 79 runs.

With New Zealand's seamers desperate just to get to the end of the 50 overs, Wyatt cashed in and launched three big sixes over the leg side and another one over cover to turn a big England total into a mammoth one.

Needing seven an over from the outset, the White Ferns' chase never really got going.

Suzie Bates (6) was dismissed by Anya Shrubsole in the seventh over to end a miserable series for the opener before Sophie Ecclestone (2-31) bowled Down (27) and took a return catch to get rid of Maddy Green (22) soon after.

Ecclestone should have had Amy Satterthwaite too, only for Sciver to drop a straightforward catch at midwicket.

The left-hander was not so lucky a couple of overs later though, miscuing a drive off Cross and this time Sciver made no mistake.

Cross was on a hat-trick when she had Devine lbw with the first ball of her next over, a review not enough to save the Kiwi skipper as UltraEdge confirmed the ball had struck pad before bat.

The hat-trick did not come but Cross did claim her third wicket in comprehensive style, uprooting Martin's off stump in the 23rd over to leave New Zealand 90-6. Brooke Halliday (27), Hayley Jensen (19) and Hannah Rowe (20) all managed to swat a couple of boundaries to reduce the margin of defeat but each of them fell victim to Knight.

All three wickets were rather fortuitous and while the England captain wore an embarrassed expression after each of them, it summed up New Zealand's day.

It was left to off-spinner Charlie Dean to seal the win, Tahuhu caught at long on by Winfield-Hill with 14.4 overs of the innings remaining.

England can now look ahead to a hectic 2022 in which they face an away Ashes series, the defence of their World Cup crown and the Commonwealth Games within a matter of months.