Eoin Morgan praises his England bowling attack after impressive start to T20 World Cup campaign with six-wicket victory over West Indies in Dubai; Moeen Ali and Tymal Mills make a big impact with the ball as West Indies are skittled for just 55

England captain Eoin Morgan was full of praise for his side after they opened their T20 World Cup campaign with an emphatic six-wicket victory over West Indies in Dubai.

The defending champions were skittled for just 55 by an excellent England attack, with Adil Rashid taking 4-2 and Tymal Mills 2-17, after Moeen Ali had done the early damage with a spell of 2-17 from four overs after opening the bowling.

England stuttered a little in their innings at 39-4, but Morgan (7no) and Jos Buttler (24no) saw them safely home with 70 balls to spare.

"I think it's as good as it gets," said Morgan. "To start a world tournament like that, or a campaign like that, I think full credit has to go to our bowling unit.

"I don't think the wicket was all that flush to bat on but still even the start West Indies got, we made inroads, they came back at us and we stuck to our guns. The guys were very disciplined.

"I thought we fielded well, we took all of our chances and built pressure and momentum to create the rest of the chances throughout the innings."

Moeen was named player of the match for his early contribution - he also took a good catch as Chris Woakes dismissed Evin Lewis - with West Indies limping to 31-4 in the first six-overs powerplay.

"I thought he summed up conditions beautifully," added Morgan of the off-spinner who has not always been a regular in the side.

"He hit his lengths really well, he took chances when his match-ups were right so I think the reason he hasn't featured as much as we would have liked is down to conditions.

"A guy in his position is always chopped and changed between either a Sam Curran or a Ben Stokes so to come in and take his opportunity like he has. He is full of confidence after his success in the IPL. It's going to be a huge contribution [from him] throughout this campaign for us."

Mills, 29, has returned to the England fold after a lengthy absence and Morgan is pleased to have the Sussex left-arm fast bowler back at his disposal.

"I'm delighted for 'Big T'," said Morgan. "He's had an incredibly unfortunate journey throughout his career right from the start, but now he's as good as I've seen him, both fit and bowling fit as well.

"His fielding is also drastically improved, which is a huge contribution, so I'm absolutely delighted that not only is he back on the field for us, but contributing in the manner that we've seen him over the past in his Sussex shirt." 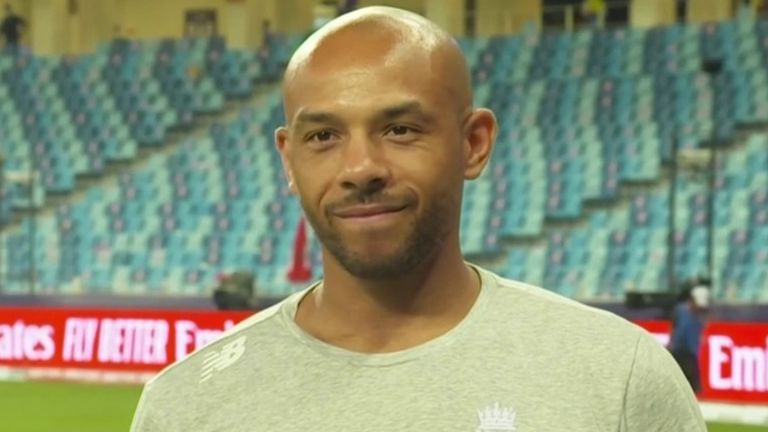 Dawid Malan, whose position was under scrutiny ahead of the game, did not bat for England after being dropped down the order from his No 3 position, with Morgan confirming this was an attempt to boost England's net run rate, which could determine who qualifies for the semi-finals from Group 1, by claiming a quickfire victory.

"We thought if we got through a couple of overs unscathed we would try and send some of the guys who could go after the ball a little bit more," said Morgan.

"It actually proved tough to get after the ball. Jos Buttler went at a run a ball for the whole innings, so it didn't work out as well as we would have liked, but it definitely would have benefitted our run rate."

"There's no words to explain it. It was plain to see," he said. "I don't think we were good enough on all counts. Being bundled out for 55 is unacceptable. We accept that, we accept the responsibility.

"These sorts of games - we just have to bin it and move on. It's not something that we're proud of as a team.

"I don't think any sort of panic will come into the camp. It's not something we're big on, panicking in these situations. We just need to accept it. We have to take it on our chests as big men and move on."