Nat Sciver's second century against Australia in the tournament comes in vain as England dismissed for 285 in pursuit of massive 357 in World Cup final; Australia win World Cup for record-extending seventh time with ninth win in a row in this year's tournament as Alyssa Healy scores 170 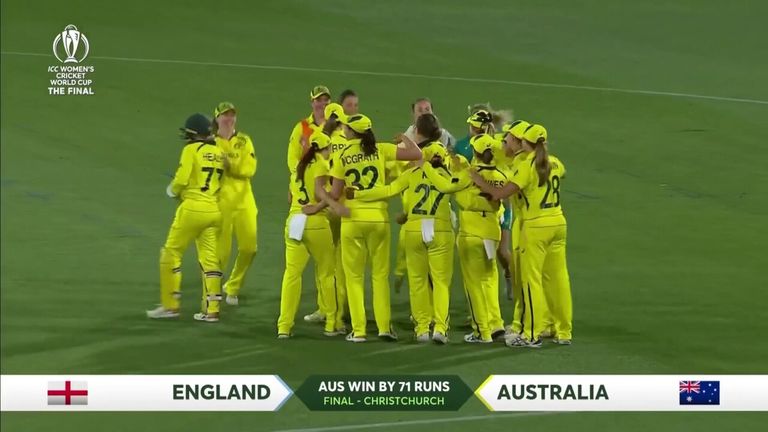 Nat Sciver's 148 not out came in vain as Alyssa Healy's stunning 170 from 138 balls powered Australia to World Cup glory with a 71-run victory over defending champions England earning them a seventh title.

Healy punished England for dropping her on 42 as she smashed her way to the highest score in either a men's or women's World Cup final.

Healy's 26 boundaries propelled Australia to a formidable 356-5, in which they hit 120 from their final 10 overs, after they were put into bat by Heather Knight at Hagley Oval in Christchurch.

Sciver top-scored with a sparkling 121-ball knock in reply, hitting her second ton against Australia in this tournament having made 109 not out against them in the group stage, as England kept up with the rate while wickets tumbled at the other end.

Knight's team missed out on becoming the first England side to successfully defend the 50-over World Cup title, with Australia ending an immaculate campaign with a ninth win out of nine to become world champions in both white-ball forms having won the last two T20 World Cups, in 2018 and 2020. England's hopes of retaining their title appeared in tatters after losing their first three games of the competition, including a 12-run defeat to Australia in their opening fixture.

But, on the brink of elimination, Knight's side launched a superb revival with five straight victories taking them into Sunday's showpiece against a juggernaut of an Australia side.

Australia were strong favourites ahead of the match, with their irresistible recent form including winning their previous seven ODIs against England and triumphing 12-4 in the multi-format Women's Ashes series earlier this winter.

The Southern Stars lived up to their billing as Healy's second century in as many games - she struck 129 in the semi-final mauling of West Indies - led Australia to the highest score in a Women's World Cup final, trumping the 259-7 they had carded in their win over West Indies in 2013. 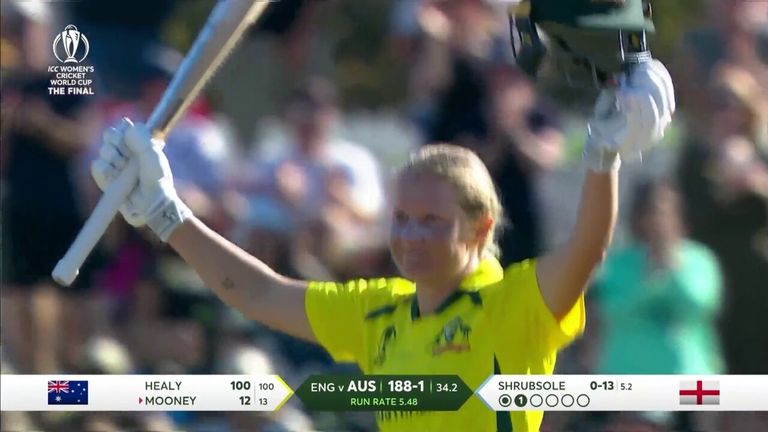 Healy, who was also dropped on 136, shared partnerships in excess of 150 with opening partner Rachael Haynes (68 off 93) and No 3 Beth Mooney (62 off 47) as England's bowlers, bar Anya Shrubsole (3-46), were made to toil on a belting batting track, raising questions as to whether Knight had made an error in electing to bowl.

Things could have been different had Healy and Haynes not been dropped in the forties in the 21st over of the innings, which began with Australia 92-0 - Kate Cross the unlucky bowler as Danni Wyatt spilled Haynes at backward point before Sciver grassed Healy at midwicket.

Healy made the most of her reprieve, playing an array of glittering strokes all around the ground, including cracking cover drives and scoops, while her husband - Australia men's fast bowler, Mitchell Starc - watched on gleefully from the crowd.

England made to wait for wickets as Australia dominate

England had to wait until the 30th over for their first breakthrough - Haynes skying Sophie Ecclestone (1-71) to Tammy Beaumont at backward point - and then until the 46th for their second, when Healy was stumped by wicketkeeper Amy Jones off Shrubsole.

Healy was quite rightly given a standing ovation as she strode off after playing a dominant hand in yet another World Cup final, having smoked a 39-ball 75 when Australia beat India to claim the T20 World Cup on home soil a couple of years ago.

The opener's exit triggered a cluster of wickets towards the death, with Ash Gardner (1) run out and Shrubsole on a hat-trick when she dismissed Lanning (10) and Mooney from successive deliveries in the 48th over.

Ellyse Perry, passed fit after a back spasm to play as a batter only, struck an unbeaten 17 from 10 balls to take Australia past 350 as Shrubsole's final over went for 15.

England opener Wyatt (4) was unable to back up her semi-final century against South Africa as she was castled through the gate by Megan Schutt (2-42), who went on to pin Beaumont (27) lbw.

Sciver, who overturned an lbw dismissal against King early in her innings, shared stands in the forties with Knight (26) and Jones (20) and then added a half-century partnership with Sophia Dunkley (23).

Sciver's alliance with Dean kept England afloat but Dean and Shrubsole (1) were then dismissed in successive overs as Australia clinched a 38th win in their last 39 ODIs and underlined their status as one of sport's most dominant teams.