Jhulan Goswami, India's fast bowling great, played her final international match against England at Lord's on Saturday after confirmation she is to quit the national team.

Rumours of the 39-year-old's international retirement were confirmed by India captain Harmanpreet Kaur, although Goswami could yet play in the inaugural season of the Women's Indian Premier League next year.

And Goswami ended as she began, taking on England in the third ODI more than 20 years after making her international debut against the same opposition in Chennai as a 19-year-old.

Nicknamed the 'Chakda Express' in honour of Chakdaha, her home town in West Bengal, Goswami has played 204 ODIs, 68 T20Is and 12 Test matches and leaves the international stage as the highest wicket-taker in women's ODI history, with 255.

Her final appearance marked a return to Lord's five years after she was part of the India side which lost to England in the 2017 World Cup final.

This time, her India side were able to celebrate a series victory in England for the first time in 23 years, winning all three ODIs.

Goswami was out for a royal duck and took two wickets in her final match to help India win the match in controversial circumstances after Deepti Sharma ran out Charlie Dean at the non-striker's end.

Before the match, Goswami said: "Each and every moment [of 20-year career] has had a lot of emotions, a lot of effort put in.

"But the 2017 World Cup where our team came back and fought [is the highlight].

"Nobody gave us a chance initially that we would be playing in a final, but the way we played that tournament was something different I think, and from there, women's cricket in India slowly and gradually picked up.

"And at this moment, we have our own path to motivate generations and young girls to take up sport and that they have an option with cricket."

As she came out to bat in the first innings, the England players gave Goswami a guard of honour, while her team-mates did the same when they took the field.

Former India captain Mithali Raj described her retirement as the "end of an era", while England's Tammy Beaumont said "she'll be a very big loss".

Others from around cricket also paid tribute to Goswami, with Virat Kohli tweeting that she has been a "great servant of Indian cricket" and Harbhajan Singh describing her as his "favourite bowler". 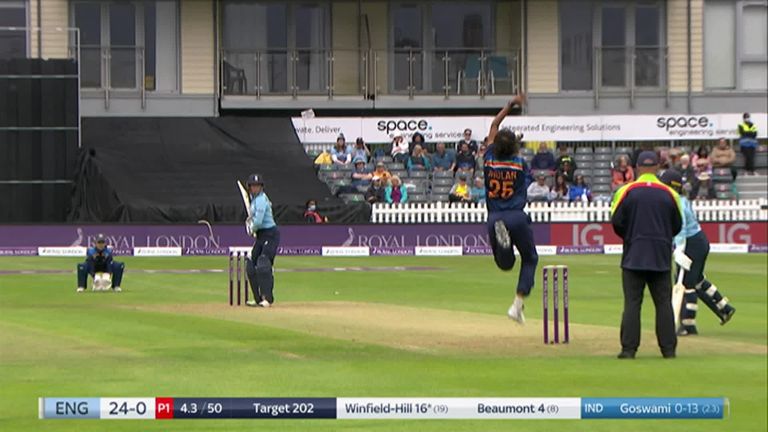 The link between two eras of India cricket

For many Indians Goswami is the last link between two eras of women's cricket in the country.

The first era saw the emergence of Goswami, alongside Mithali Raj, Diana Edulji, Shikha Pandey and Shantha Rangaswamy and laid the path for the current crop.

Along with Pandey, Goswami was, and still is, the flag bearer for India's seam bowling, an area which has lacked depth until recently.

During her time with the international side, India have gone from a middling team to one of the world's best, with an ever-increasing following and the possibility for more talent to emerge through the Women's IPL.

Her career remains a blueprint for the talent hidden in small Indian villages.

Current India men's captain Rohit Sharma recently described Goswami as a once-in-a-generation player, and the likes of Renuka Thakur and Meghna Singh will hope now to build the legacy she leaves.