Who are cricket's emerging talents? Every Wednesday, we will focus on 'the next big thing' in the sport and this week it's India Women spark plug Shafali Verma...

The Women's T20 World Cup final last month was a momentous occasion with over 86,000 fans in attendance at the MCG to watch Alyssa Healy inspire Australia to victory over India.

But spare a thought for Shafali Verma.

The 16-year-old India opener dropped Healy on nine - the Australian went on to slam 75 from 39 deliveries, including a record 30-ball fifty in an ICC final - and was then dismissed for just two as the first-time finalists were rolled for 99 to lose by 85 runs.

Verma was seen in tears at the end of the game and had to be consoled by her team-mates - but as Ben Stokes knows well, despair in one ICC final can be replaced by delight in another.

March's Melbourne showpiece will surely not be the last time Verma figures on the grandest stage, with the batter and her team on a sharp rise.

India have now reached the final of two of the last three women's ICC events, having also faced England in the prize game of the 2017 50-over World Cup at Lord's, a match they looked sure to win until Anya Shrubsole produced the bowling spell of her life.

Further finals look inevitable for India and Verma should be at the heart of it. She was, remember, one of the main reasons given when pundits assessed how her team would might topple hosts Australia at the MCG. 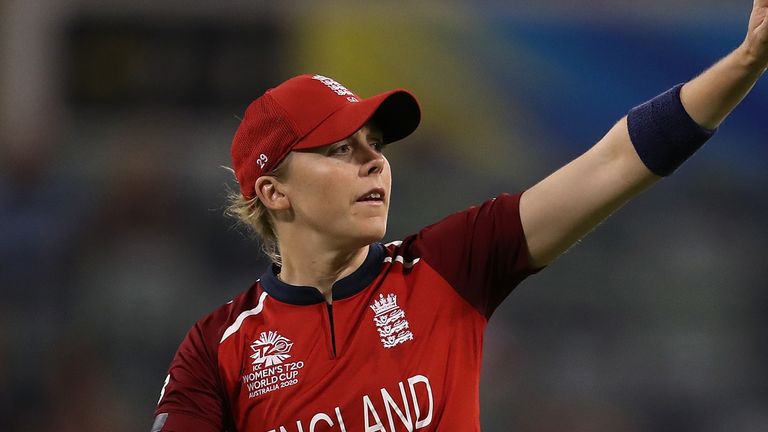 Shafali is a real talent, a scary one to have to captain against because of how destructive she is and how she seems to have no fear. She has learnt really quickly as well. She struggled a little bit against spin early on but seems to have found a way to counteract that and score even faster.

That's because the youngster had already shown a glimpse of her supreme talent against the Southern Stars a few weeks earlier in the first game of the tournament with a 15-ball 29.

Verma continued her opening onslaughts in India's three other group games as they secured a 100 per cent record and emerged as pool winners, an achievement that proved crucial as it meant that they advanced from their rained-off semi-final at England's expense.

Verma blazed 39 from 17 balls against Bangladesh. Nailed 46 from 34 balls against New Zealand. Smote 47 from 35 balls against Sri Lanka. The usually destructive Smriti Mandhana played second fiddle in this opening pair.

"She trains with absolute freedom and that's how she plays as well," said former England batter Lydia Greenway. "The power she has is unbelievable. She will whack anything full and straight down the ground.

"She has a healthy arrogance about her in that she will take on [Australia's], Ellyse Perry, take on [South Africa's] Marizanne Kapp, take on the best bowlers in the world because she has that ruthless belief in her ability."

India men's coach, Ravi Shastri, recently told the Sky Sports Cricket Podcast that Verma bats like Virender Sehwag - but it is Sachin Tendulkar who got her into cricket in the first place.

It was nice meeting you too, Shafali.
Hearing from you on how you had travelled all the way to Lahli to see my last Ranji Game & now seeing you play for India is amazing.

Keep chasing your dreams because dreams do come true.
Enjoy the game and always give your best. 👍

"Papa used to talk a lot about Sachin Tendulkar. When I first saw him bat, I knew I had to try this," Verma said during the T20 World Cup.

Verma has since taken one of Tendulkar's many records from him, namely for the youngest India batter, male or female, to score an international fifty.

Tendulkar was 16 years and 214 days when he made a Test half-century against Pakistan in Faisalabad in 1989 but Verma was just 15 years and 285 days when she clobbered 73 from 49 balls in a T20I against West Indies in St Lucia in November.

For good measure, Verma thrashed an unbeaten 69 from 35 deliveries against the same opposition on the same ground the following day.

Her cricketing start came amid her brother's misfortune, with Verma taking her sibling's place in the local Under-12 side when he fell ill.

The clubs in her area did not want girls playing the sport but Verma foxed the officials with her short hair and went on to win the "Man of the Match" and "Man of the Series" awards.

Verma's success transferred into professional cricket, notably when she struck a 56-ball 128 in a T20 tournament during the 2018-19 season.

Her success in the West Indies followed and shortly before a pre-T20 World Cup tri-series against Australia and England, Verma smoked 124 from 78 deliveries batting for India A against Australia A in 50-over match in Brisbane. The Australia attack, some of whom had international experience, couldn't contain her.

What a talent the youngster is! pic.twitter.com/HbTg2x5WHG

Australia A coach Leah Poulton told cricket.com.au afterwards: "She's just an amazing talent. We'd seen a bit of footage leading in but when you watch footage of a player like that it probably doesn't do it justice. She's actually got a really good presence at the crease.

"Even though she's 15, she's a tall girl, strong girl. Over the years India have produced these opening bats with amazing techniques whereas she walked out there and she was pure power.

"I did get into fan mode for a while there! She just had so much composure at the crease, she didn't look fussed at all. She's definitely going to be one to watch over the next few years."

Australia's first-team bowlers had difficulty against Verma in the tri-series, too, when the opener carted a 28-ball 49 to help India to a seven-wicket victory at Junction Oval in Melbourne in early February, with Perry, Megan Schutt and Jess Jonassen all tonked.

Verma could not repeat the feat in Melbourne's iconic stadium in the T20 World Cup final but her time will come.