The Green Machine is now two world titles away from Eric Bristow and Raymond van Barneveld. Will he catch Barney? "I will catch him, don't worry."

Michael van Gerwen is on a quest for total domination. Three PDC World Championship titles are simply not enough for the best player on planet darts, writes Raz Mirza.

The Dutchman arrived for media duties at a swanky north London hotel as though he was ready to take to the Alexandra Palace stage wearing his now-traditional green darts shirt with accompanying black trousers and shoes.

Albeit the world No 1 was a little bleary-eyed but he was in a cheerful mood having secured his third World Darts Championship crown over Michael Smith the night before.

Speaking to the media the morning after a major tournament can only mean one thing - he's a World Champion once again, and the 29-year-old was only too keen to emphasise that point to the assembled press from around the world.

Having just spoken to Sky Sports News' Jeremy Langdon, Van Gerwen called me over to the back of the room where we sat on a couch away from the hullabaloo.

"The first thing I did was to speak to my family back home, that's the most important thing. Of course I really missed them but you have to make sacrifices if you want to reach your goal and I did good. I glad I won it," Van Gerwen said, just as his cappuccino with one sugar arrived. 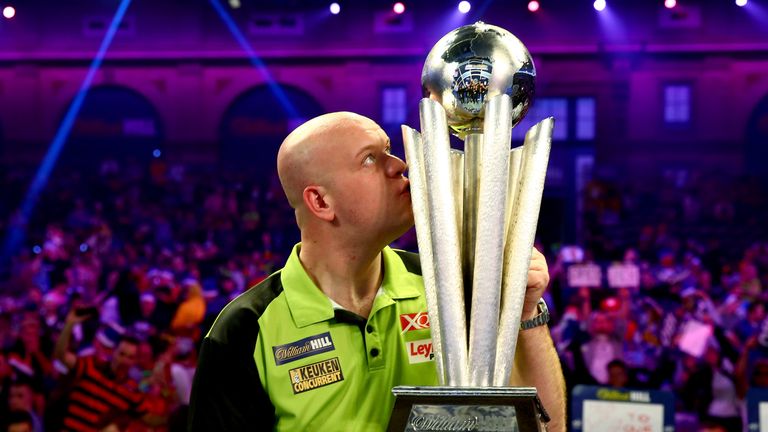 "My scoring has been so good in this tournament which is why I have been leaving checkouts of under a ton a lot more. I've been hitting 11-dart legs, a bit like what Phil used to do but a little bit better," smiled Van Gerwen. "I never studied how Phil played the game, I'm only busy playing my own game.

"Winning world titles in this era is a lot harder than in Phil's time, just look at the averages and the amount of top-quality players around the circuit. It's a lot more difficult, but all I know is that my highest level is higher than Phil's highest ever was. If look at the standard of darts on TV, I think I have taken it to a new level. Of course he won so many titles, but it's really difficult to compare era's."

MVG has now averaged over a ton in 18 consecutive matches on the Ally Pally stage with even his 'B-game' at 102.21 more than sufficient enough to repel Smith's power scoring on New Year's Day. His tournament average was a modest 103.28.

Compare that to his scintillating 6-2 semi-final victory over compatriot Raymond van Barneveld in 2017 when he averaged an absurd 114.05.

"I haven't made a lot of mistakes in my game lately," he said. "You can see that in my performances because they're always over a hundred average and even my B-game is above a hundred so players know what's coming. They know if they have any chance of beating me then they'll have to bring their A-game."

The title consolidated Van Gerwen's position at the top of the men's game and while he might struggle to match the phenomenal numbers of 16-time world champion Taylor, he has an eye on surpassing another Dutch great.

"I will catch him (Van Barneveld), don't worry," he said. "What can I honestly say? Of course I'm going to have more world titles than him. I know it's not nice for him but it's the truth.

"If I can win another two or three titles in the next 10 years then something has gone badly wrong. I think two titles every three years is realistic for me and I still haven't peaked yet. I can play much better than what I did this year and there is much more to come."

Van Gerwen collected 20 titles during another trophy-laden year, but despite the success he also received criticism in the media for not winning the World Matchplay or the Grand Slam of Darts. He blames that on himself.

He said: "My bar is much higher than any other player. If I don't reach my bar then they say 'Ah, poor year'. People are just not realistic."

The following evening Van Gerwen was celebrating with his trophy in his hometown of Vlijmen in the Netherlands before flying off to an exotic destination with his family for a thoroughly well-deserved holiday.

Don't forget that the Premier League action gets underway on Thursday, February 7 in Newcastle. You can also stay up to date by following us @SkySportsDarts and get all the latest news and interviews by heading to www.skysports.com/darts