Professional Darts Corporation chief executive Matt Porter has said the body will heed government advice on the running of upcoming Premier League nights, in light of the coronavirus pandemic.

The Premier League go did ahead in Liverpool on Thursday, as well as Players Championship events in Barnsley this weekend but European Tour competitions and the Premier League stops in Rotterdam have already been switched.

Night Seven of the Thursday night roadshow is set for Newcastle this week, and as it stands is still going ahead.

"This is obviously an ever-changing situation and I think it's dangerous to make long-term predictions or to forecast what's going to happen even as much as 24 or 48 hours in advance," Porter told Sky Sports News.

"It's obviously evolving, and we will wait and see what the government advice is over the next few days."

There were precautions taken in Liverpool last week.

"It's obviously something that we were fully on top of and we issued precautionary measures with things like player interaction with fans during the walk-ons, how staff engaged with people and making sure that the venue were fully on top of there being right sanitisation provisions on site," he continued.

"It's not something that we're taking lightly by any stretch of the imagination, but we've made sure that the right precautions are in place to keep everybody as safe as possible."

So is there the prospect of the competitions continuing away from the fans?

"We've got [Players Championship] events taking place at the moment in Barnsley and they are behind closed doors. They are tour events for players, they are restricted to one guest each and there's a small number of staff on site," Porter explained.

"That's a relatively controlled environment and we've been liaising with the venues.

"Those events lend themselves to a behind-closed-doors environment. Does Premier League Darts work if it's behind closed doors? Arguably not.

"It's a situation we encountered a couple of years ago at the UK Open when we had to play behind closed doors due to extreme snow. It forced the venue to be closed.

"It clearly changes the whole atmosphere and dynamic of the event because darts is built on its colour and its noise etc. 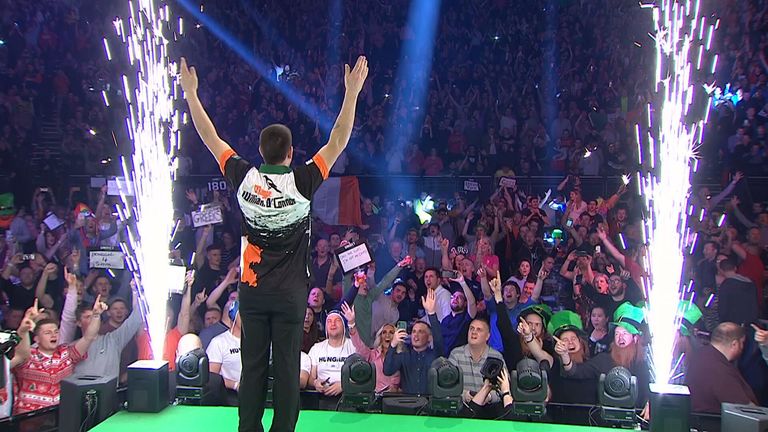 Does Premier League Darts work if it's behind closed doors? Arguably not.

Porter feels fans are essential in the Premier League

"So that [playing Premier League behind closed doors] is something that we'd have to consider very carefully, and it certainly wouldn't be our preferred option.

"We've managed to speak to our venues who we still have Premier League nights outstanding with and look at alternative dates, like we've done with Rotterdam when we'll be going there in the second week in September all being well."

Should a player be unable to fulfil a fixture or decline to participate, the PDC will have decisions to make.

"Currently in the Premier League if a player defaults on a game then they lose that match, basically because it's always been quite difficult to fit other matches in on an ad hoc basis," noted Porter.

"Clearly if there were to be no players available to play then that would change the situation entirely. It's only a 10-player event, nine of which are regulars and one is different on a week by week basis.

"That's something we'd evaluate as and when it happens."