Peter Wright and John Henderson led Scotland to a second World Cup title with victory over Austria in Sunday's final; Lloyd offered his thoughts on the current format and analysed the recent struggles of England and Netherlands

The World Cup of Darts is a tournament that continues to grow in profile, and we were treated to another thrilling four days of action in Jena this year, as Peter Wright and John Henderson led Scotland to a second World Cup success.

The Scottish duo defeated four-time winners Netherlands and reigning champions Wales to advance to Sunday's showpiece, before overcoming the unheralded Austrian duo of Mensur Suljovic and Rowby-John Rodriguez to lift the coveted title.

The unique pairs format adds a different dynamic to the event, and there have been calls for the tournament to be centred solely on pairs matches, rather than featuring singles matches which predominantly favour the higher-ranked nations.

However, former world No 1 Colin Lloyd has urged the PDC to retain the current format, as he reflected on a thrilling weekend of darting drama at the Sparkassen Arena.

"I actually like it the way it is, because I like the fact there's a head-to-head," Lloyd told the Darts Show podcast.

"You know that it's more or less a straight knockout match; by that sense you've got to win, as you cannot rely on what your partner is doing.

"You want to go up and win, and if it comes down to it and he gets beaten: 'OK, didn't expect that to happen, but right, let's get ourselves up for the pairs'.

"I think that all adds to the drama. I love it and it makes it into a bit of a frenzy, because someone has gone up 1-0, then it's 1-1 and it's like a pendulum swinging.

"Who has got the advantage? Who is mentally tough enough to push on and get through this game now? I like the format the way it is. I don't think anything should change.

"Maybe make it a 64-nation event? You cannot rank it I don't think, but maybe have all those players that are competing in it, if the PDC can find a bit of budget, have something that would be called a World Open.

"All the players that competed in it [World Cup], have a singles knockout starting the following day. You can play it all over one day, it would be just like a Pro Tour event. Open draw, no one seeded. Then you could see some shocks."

One of the major talking points to emerge from the World Cup was the struggles endured by England and Netherlands, who are yet to find sufficient replacements for Phil Taylor and Raymond van Barneveld.

Taylor and Adrian Lewis guided England to four World Cup triumphs between 2012-2016, while Van Barneveld also lifted the title on four occasions; claiming the inaugural staging alongside Co Stompe, before partnering Michael van Gerwen to a hat-trick of titles.

England have failed to win the World Cup since Taylor hung up his arrows, while Netherlands have not progressed beyond the semi-finals within the last three years, since Barney's ever-present record in the competition came to an end.

"I'm not sure if they will be pleased about it. They will want to see their country doing well," Lloyd added.

"When you play with a pairing like those two; Adrian Lewis with Phil Taylor at the time. Adrian Lewis was still throwing such classy darts. You were looking at it thinking: 'Those two could really hurt you'.

"Barney was playing with MVG. You just mention those four names in their prime. You are up against it before you've even stepped on the plane to go to Germany to play the World Cup of Darts.

"You are playing with legends - people that you know may have an off leg, but all of a sudden they will bounce back and there's a 100+ average going in left, right and centre. You're thinking to yourself: 'Right, I must do my bit now'.

Top seeds England - represented by James Wade and Dave Chisnall - advanced to the semi-finals in serene fashion, before they were dumped out by an inspired Austria in successive singles rubbers.

Van Gerwen and Dirk van Duijvenbode led the Dutch assault for a fifth World Cup crown, yet they were left to rue a host of missed doubles as they succumbed to eventual champions Scotland in a gripping quarter-final.

"Wadey was looking good and Chizzy had his little moments, but Chizzy for me seemed like he was sometimes a rabbit caught in the headlights.

"He was beating himself up a little bit, but they ended up getting to the semi-finals, so they must have been doing something right.

"I'm not quite sure about the Netherland set-up. I don't think MVG and Dirk gelled together very well. 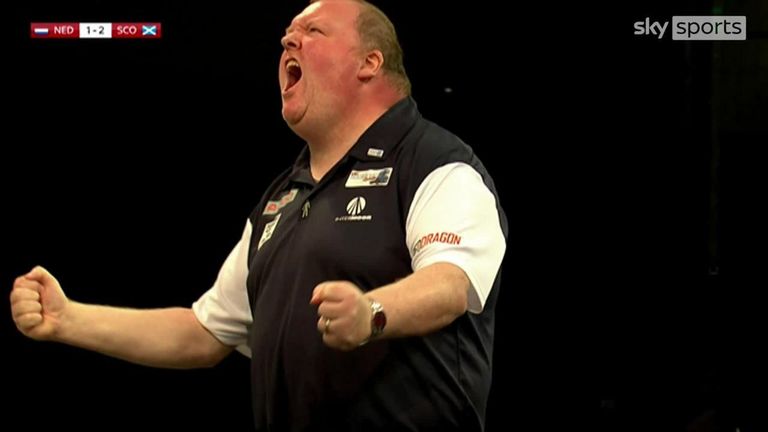 "Having said that, they got some results; they got to the quarter-finals and only lost out to Scotland, who ended up being crowned champions.

"There is a qualifying criteria and that is what keeps it fresh and keeps it interesting, because you could end up with a different team, year after year."