Michael van Gerwen stumbles over the line with a 5-3 victory against Nathan Aspinall to add the 2022 edition of the World Grand Prix to his 2012, 2014, 2016, 2018 and 2019 crowns; the Dutch star also adds to the Premier League and the World Matchplay titles he has already won this year 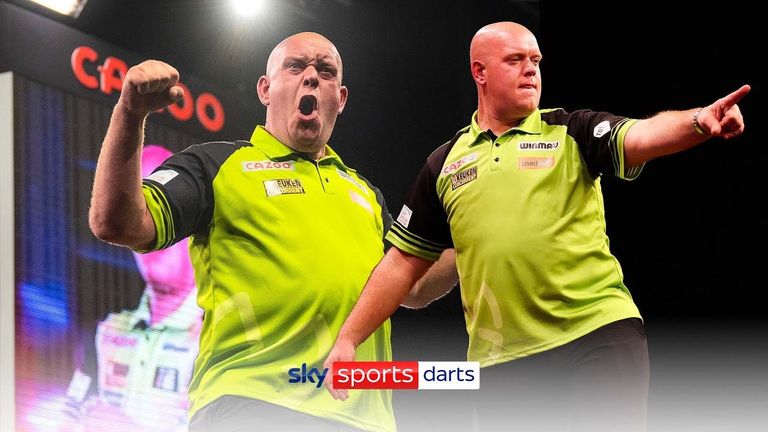 Michael van Gerwen held off a storming comeback by Nathan Aspinall to claim a sixth World Grand Prix title at the Morningside Arena in Leicester on Sunday.

The Dutchman followed up his Premier League and World Matchplay triumphs earlier this year by regaining the World Grand Prix title on another memorable night.

Van Gerwen had claimed his first PDC televised title at the World Grand Prix a decade ago, and celebrated that anniversary by scooping the £120,000 top prize and lifting the specially-commissioned new trophy.

The success was also his first in the double-start format since 2019, as he denied Aspinall - playing his first major title since 2020 - a second televised ranking title. 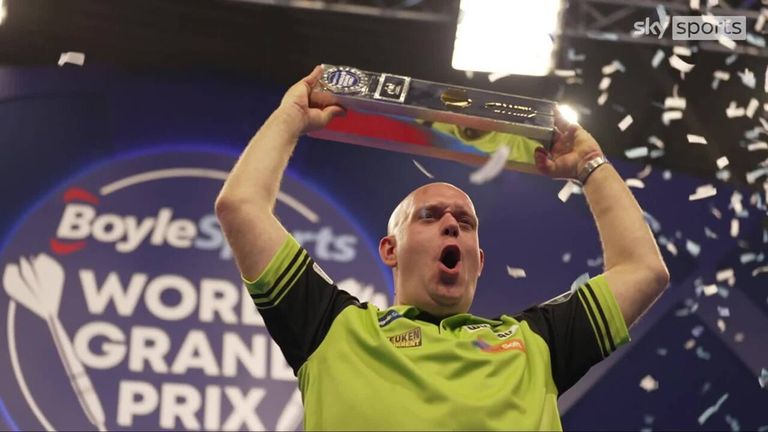 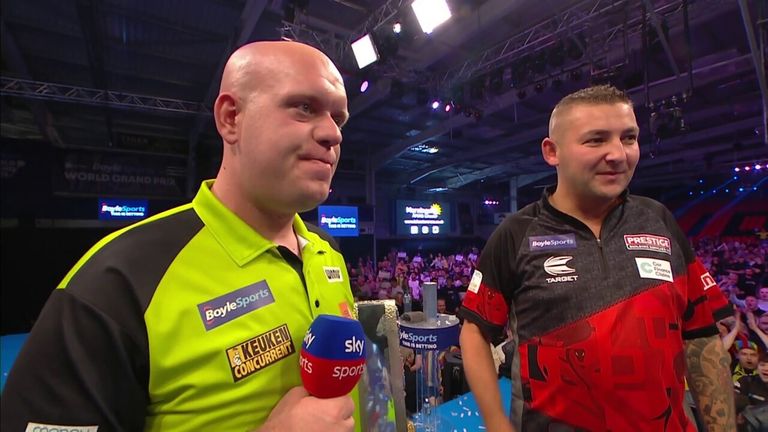 The Stockport thrower had found himself four sets down as Van Gerwen stormed towards the title, but hit back with three straight sets in a gutsy display before the world number three finally sealed glory.

"For me to have this trophy back feels amazing," said Van Gerwen. "It's great to have this tournament back in my hands but I had to battle for it really hard.

"When a guy like Nathan puts his relaxed mode on he can play some phenomenal darts but I'm glad I won this one. It was a tough one.

"I wasn't panicking at all - I think I did all the damage early doors. I think this was great for darts - I was 4-0 up and Nathan never gave up, he kept battling." 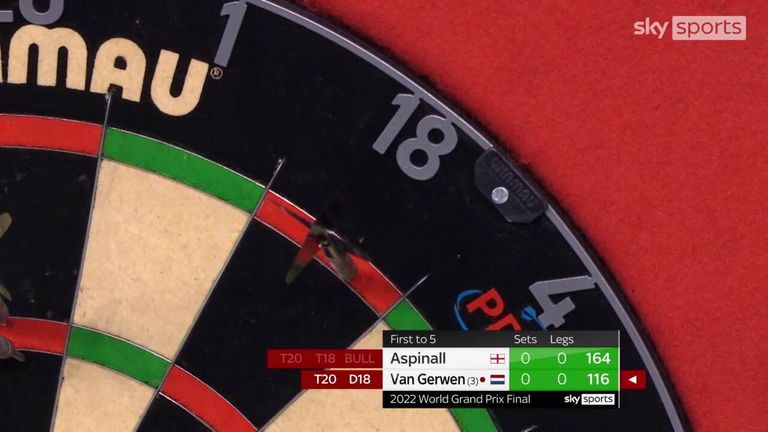 'The Green Machine' won the opening leg with a 116 finish and then took out 83 to break and double ten to seal the first set.

The second and third sets both went the full five-leg distance, but Van Gerwen was too strong in the deciding leg on each occasion as he created a three-set cushion.

Aspinall led in set four, only for five missed doubles across the next two legs to prove costly as the 33-year-old Dutchman pounced and then added double ten to claim the set and a 4-0 lead.

'The Asp' came from a leg down in set five to begin his fightback with three successive legs to begin a gutsy response, cheered on by a supportive crowd.

Van Gerwen missed six starting doubles in the opening leg of set six, and Aspinall also claimed back-to-back legs as he claimed a second set by a 3-1 scoreline. 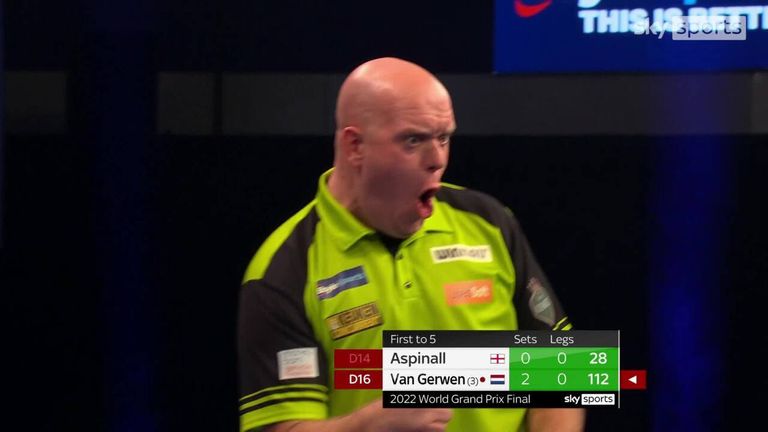 The comeback continued in set seven despite a brilliant 12-darter from Van Gerwen, who missed seven starting doubles in leg four as Aspinall followed two earlier 14-darters with double five to claim a third straight set to pile the pressure on his opponent.

Missed darts at double top from Aspinall in each of the opening two legs in set eight allowed Van Gerwen to post a brace of double tens as he moved a leg away from glory.

But Aspinall wasn't done as he landed tops to keep his hopes alive in leg three and hit the same bed to level the set, but in a tense deciding leg he missed two doubles with Van Gerwen stepping in to fittingly seal a sixth World Grand Prix title on double six. 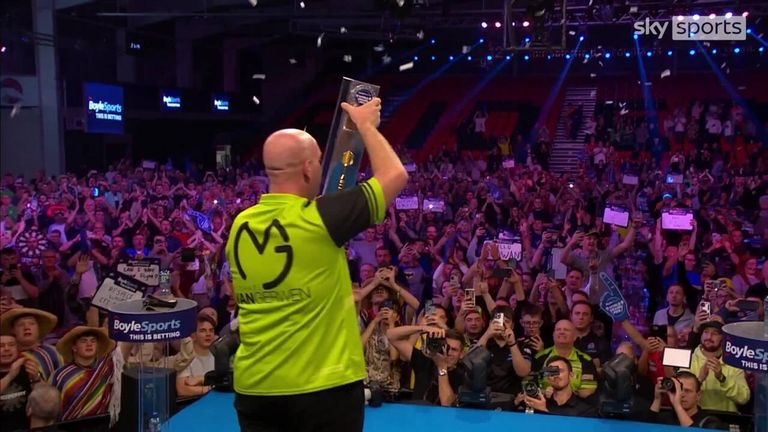 Van Gerwen was also full of praise for Aspinall's return from a serious wrist injury which kept him sidelined for six weeks at the start of 2022.

"Nathan has been struggling with such a bad injury on his arm, he's been a credit to sport in the last year," he said.

"He battled back and I think that is the difference between a winner and a loser, and I think he was a winner tonight."

Aspinall paid tribute to Van Gerwen's triumph, saying: "This week, Michael has been amazing - he's back to his best and he's been the deserved winner of this tournament.

"He's been phenomenal all week but I never gave in. It's another final and I'm very happy."

What's the next tournament on Sky Sports?

The Grand Slam of Darts at the Aldersley Leisure Village is the next big tournament to hit your screens.

The prestigious 32-player event returns to Wolverhampton from November 12-20, as the sport's biggest names battle it out for the iconic Eric Bristow Trophy.

Michael van Gerwen, Gerwyn Price and Peter Wright are among the players to have won televised events during the qualifying period, alongside Joe Cullen and Danny Noppert.