Charles Leclerc was fastest as Ferrari showed strong pace in a wet final practice ahead of Singapore Grand Prix qualifying on Saturday.

Leclerc topped Red Bull's Max Verstappen, who can win the world championship in tomorrow's race, by half a second with a 1:57.782 on a drying surface.

The other Ferrari of Carlos Sainz was a further half-second back in third, while Alpine's Fernando Alonso and Verstappen's Red Bull team-mate Sergio Perez were the only other cars within two seconds of Leclerc's leading time.

Mercedes were well off the pace with both George Russell and Lewis Hamilton more than three seconds back in ninth and 12th respectively, and will be hoping no more rain falls before qualifying later on Saturday.

After a heavy downpour at the Marina Bay Street Circuit, the first half of Practice Three was wiped out before the drivers tentatively took to the track on wet tyres.

It took about 10 minutes of wet running before intermediates became the preferred tyre, with Verstappen and the Ferraris quickly establishing themselves in a league of their own.

The shortened wet session adds further mystery after a Friday that saw both Red Bull and Ferrari face interruptions that limited their running, leaving an unclear picture of who would hold the most pace if the track were to fully dry in time for qualifying.

Mercedes had appeared competitive in dry conditions on Friday, with Lewis Hamilton topping Practice One, before both Silver Arrows showed strong speed in the second session.

Aside from the incredible views the Marina Bay Street Circuit is producing on its return to the F1 calendar after three years, it was a session of limited drama as drivers avoided taking too many risks with qualifying to follow a couple of hours later.

Nicholas Latifi went off track on a couple occasions but avoided contact between his Williams and the barriers, while Mick Schumacher was noted for an unsafe release by the stewards after Haas sent him out on track with his right rear tyre not fitted correctly.

Verstappen is seeking a victory that will give him a chance of sealing the title with five races remaining, but would need both Perez and Leclerc to have disappointing races to have a chance of doing so. 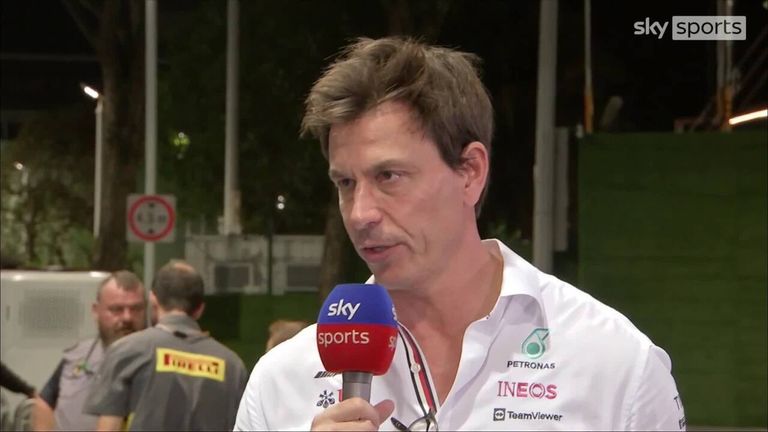 The session played out amid a continuing row in the paddock regarding the FIA's upcoming publishing of budget cap certificates for the 2021 season.

The sport's governing body are expected to award certificates on Wednesday for teams that are deemed to have adhered to the budget, with reports alleging Red Bull are among two teams have not.

Mercedes team principal Toto Wolff spoke about the importance of the regulations being policed on Friday, before Red Bull boss Horner hit back on Saturday by saying rivals were making "fictitious" claims about his team.