By James Galloway in Singapore

Sebastian Vettel has named himself as the "biggest enemy" in his title fight with Lewis Hamilton.

Vettel goes into this weekend's Singapore GP with a 30-point deficit to Hamilton in the Drivers' Championship with his challenge for a fifth drivers' title now at a pivotal juncture after a disappointing result at Monza.

Ferrari are still considered to have a faster car than Mercedes, and are favourites for this weekend, and Vettel believes they still have "all the chances" to finish ahead this year.

"It's pretty straightforward for me. I think the biggest enemy is me," the Ferrari driver said when asked if he felt he could not afford to drop more points to Hamilton.

"We have a great car, if I have something to play with then I think we have all the chances to do it in our way.

"Obviously he's the leader at the moment, he's ahead, so he's the one to beat. But we have all the chances and how much they could be better by now and so on, that's a different question, but we still have a very good chance and, as I said, we will be our first enemy and not him as a person or them as a team.

"We need to look after ourselves and if we do that we have a good chance to do well, to win races and things look good."

Vettel had been favourite for Ferrari's home Monza race but finished only fourth after spinning in a collision with Hamilton when the Englishman overtook him on the opening lap.

The incident was widely cited as another example of Vettel making a 'mistake' under pressure this year but, on his arrival in Singapore, the German insisted he was only looking forwards.

"It's normal if you do a lot of races and some you feel you should and could have done better for various races," he said. "But there were other races where we shouldn't have done as well and we did.

"For sure the worst one was Germany [when he crashed out while leading], but the most important is I know what happened and I can explain it. I would have loved to have won in Germany, but I'm not too bothered, I'm generally looking forward and not focusing on what we all could have done differently to avoid what happened." 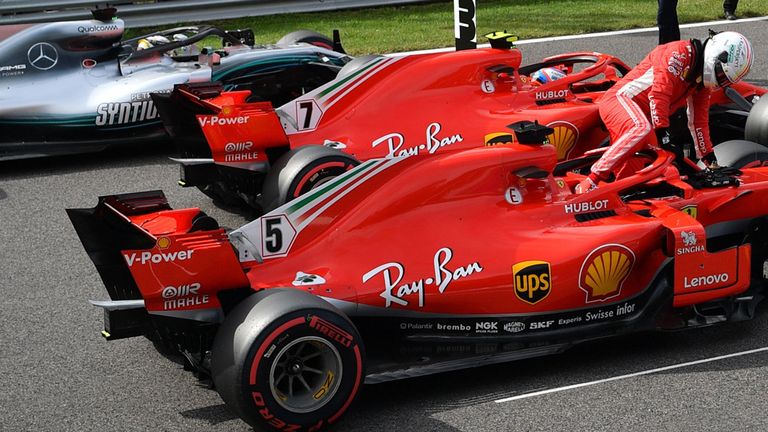 This is pivotal. This is a must-win race not only for Ferrari but Sebastian Vettel as well in the championship fight.

The 31-year-old's title bid last year started to unravel in Singapore when he crashed with team-mate Kimi Raikkonen and Max Verstappen off the line in the race, but his record on the intense street track is otherwise peerless with four wins and as many pole positions.

"I like coming here and like the track," said Vettel. "It's the toughest race we have all year mentally and physically for various reasons.

"It's the sort of race that you don't want to start, you'd rather prepare more to be more prepared, but then you are happy it starts because it's a challenge you look forward to."

The latest rumour and speculation in the F1 paddock

No let-up from Mercedes
Despite a recent car disadvantage, Mercedes have won three of the last four races to stretch their leads in both championship battles at the start of the decisive final flyaway rounds.

Hamilton's chances of beating Vettel to a fifth world crown have therefore never appeared stronger, although the Englishman has insisted there is no room to relax.

"It's definitely looking better, but there's still so many points available so we can't change a single thing," said Hamilton.

"We've got to apply the pressure.

"They have been quicker these last races and we've managed to overhaul them through strategy or by doing an overall better job. So we've got to keep doing what we're doing and applying that pressure because at the moment it's working."

And Hamilton said his target through the remaining races would be avoiding making the mistakes which have cost his rival so dearly already in the title race.

"I don't look at his mistakes as a negative," said Hamilton. "We are elite Formula 1 drivers, we are at the forefront of this sport right now and we have the most pressure on us. We have a billion dollars, probably, behind us collectively, and then we have to go out there and perform. The stakes are so high for us.

"I take a lot of pride in trying to be consistent, and not make mistakes."