Explaining how he had received 400 messages from well-wishers in the wake of his title-winning drive at the US GP, Hamilton said one from his former team-mate was particularly special.

"I got a text from Fernando which was really amazing," said Hamilton at the Brazilian GP.

"I was really grateful for that because obviously we've gone through a whirlwind of experiences together over the years.

"But in all honesty, I've always had respect for what he's achieved and his ability. Also seeing his growth through his period of time at McLaren." Alonso, then the reigning two-time world champion, was Hamilton's first team-mate in F1 at McLaren in 2007, but the season proved infamous for the explosive nature of the partnership between the sport's established and rising star as they battled for a drivers' title they both ultimately missed out on.

Although never effectively in direct combat for a championship thereafter, Hamilton and Alonso remained front-running rivals when the latter was at Ferrari and developed a strong mutual respect. The Briton described Alonso as one of F1's best-ever drivers when the Spaniard stepped away from the sport at the end of 2018.

A similar relationship has developed with Sebastian Vettel, who sought out Hamilton before the podium in Austin to offer his congratulations.

"Recognition is not something that drives me but it is an honour when you have other drivers, particularly with Seb, that you respect so much for their ability," said Hamilton.

💬 "If somebody wins the title six times he deserves all of it. That's what I told him as well.”

Hamilton on what Ron Dennis' text meant to him

After sealing the title in Austin, Hamilton revealed to Sky Sports F1 that he had received a text message from Ron Dennis - the legendary former team boss who supported his rise through the junior ranks and then brought him into F1 at McLaren.

"Seeing Ron's text really touched me inside," explained Hamilton when asked about the message by Sky F1's David Croft.

"I met him when I was 10 years old and he saw something in me that no one else did, except for my dad. He gave me an opportunity to showcase my abilities and to learn and to grow. 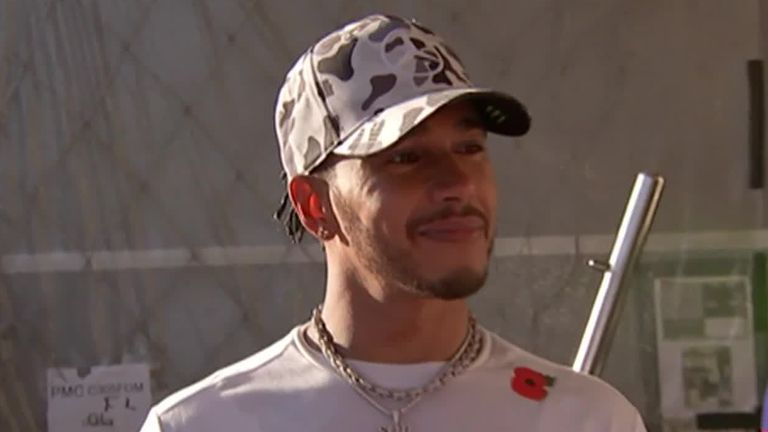 "Without him I most likely wouldn't have made it to Formula 1, I would have fallen away due to lack of finances. I would have been leapfrogged by a bunch of individuals who had more money to back them. So I'm forever grateful to Ron and always have love for Ron.

"He said how proud he was and I hope that he can share and feel that he's just as much a part of this as anyone."