Lewis Hamilton was frustrated by "crazy bouncing" in Mercedes during Friday practice; Charles Leclerc says he will need to take risks despite a dominant start to weekend; watch P3 live on Sky Sports F1 at 12pm on Saturday, with qualifying to follow from 2pm 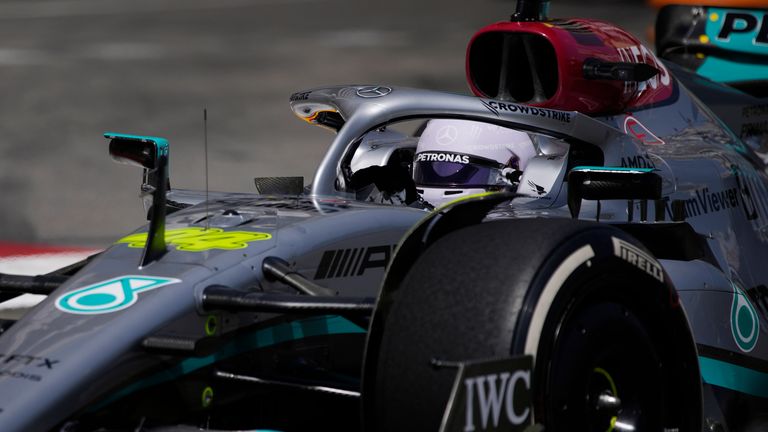 A frustrated Lewis Hamilton described the Monaco circuit as the "bumpiest rollercoaster ride" and says he already has low expectations for F1's marquee weekend after a troubling start in the Mercedes.

While Mercedes came into the Monaco GP weekend with newfound 2022 momentum after an improved showing in Spain, Hamilton finished well down in 12th at the end of Friday and suffered all day with bouncing.

The bouncing was not the same as the 'porpoising' Mercedes' have struggled with all season long but more to do with the Monaco track itself. The end result, however, was just as agonising as both Hamilton and George Russell, who finished sixth in P2, lacked pace and balance.

"It's the bumpiest the track has ever been," said Hamilton, well over a second off pacesetter Charles Leclerc. "And it's probably the bumpiest track I've ever driven.

"It's like... eyeballs coming out of the sockets. It's the bumpiest rollercoaster ride ever." 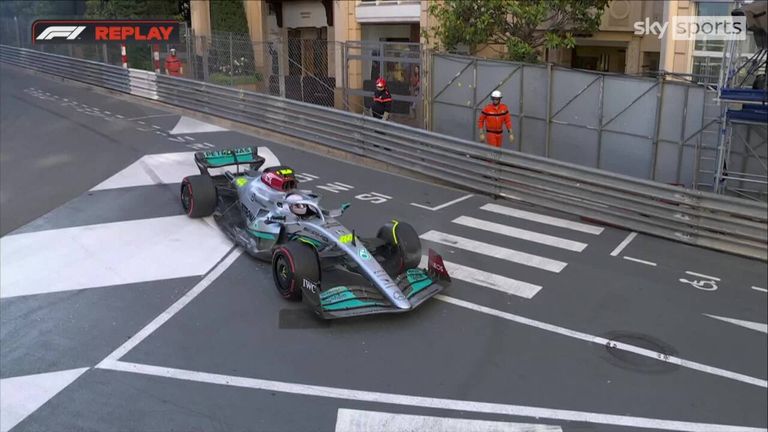 Hamilton stressed that his bouncing was a "lot different" to what he had experienced had all season and said it was all but impossible to extract pace from a Mercedes that had encountered the issues more than most.

"Putting a lap together is difficult," Hamilton explained. "I think we made some improvements going into that session... and when you actually try to put a lap together, the grip doesn't feel terrible. But we've got some work to do overnight.

"As anticipated didn't think we'd be as quick as the Ferraris and the Red Bulls, our battle is to try and stay away from the McLarens."

Leclerc enjoyed a superb start to his home weekend with a practice double, with Ferrari extending their advantage over Red Bull in the second session. Lando Norris, meanwhile, was best of the rest in fifth in the McLaren. 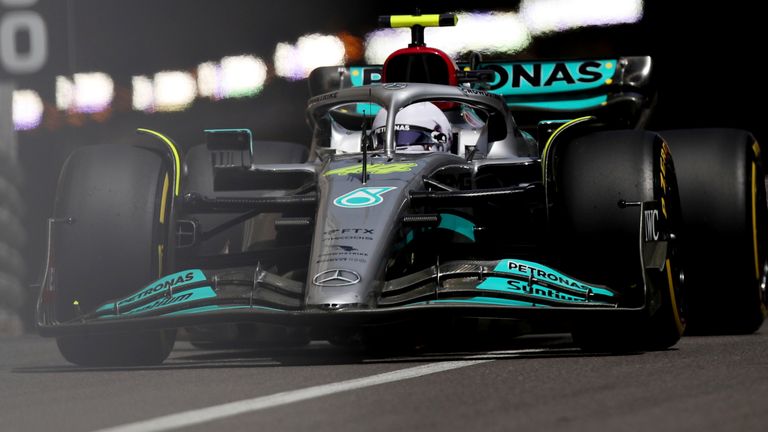 Hamilton criticised the Monaco circuit as well as how the new-for-2022 cars navigate it, stating: "I remember my first years here, a light nimble car going round and it was so much better.

"Now we have these super heavy cars."

"The best laps of the day were the first few laps of P1," added Hamilton. "We'll study the data and try and understand how we can imp[rove the bumps. I really hope for a better day tomorrow.

"It feels like the cars got the potential to really be up there with the guys but there's all these things that are hindering us a little bit. But we won't stop fighting."

Russell similarly called his Friday "really tricky" despite beating Hamilton and reserved praise for Ferrari, who he was 0.7s off in P2. 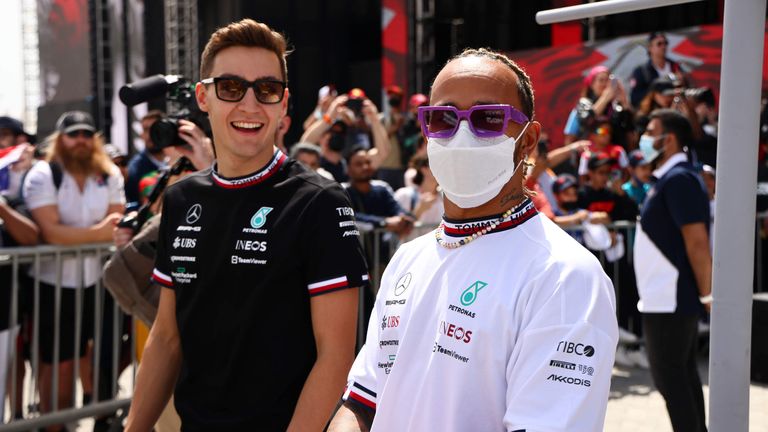 "I think we're seeing Ferrari flourish again," he said. "We've seen how good they've been over kerbs, we saw in Imola when they were just smashing over them with relative ease and it's obviously playing into their hands at the moment.

"We've got a lot of work to do overnight. I'm not too sure we can really close that gap.

"I think that's going to be a fair result this weekend - in the sense of behind Ferrari and Red Bull - but we need to make sure that we don't have cheeky little Lando popping it in there too."

Leclerc: We will have to take risks in qualifying

Despite his team's advantage over Red Bull, Leclerc said that he will face "higher risks" on Saturday if he wants to stay in front of them.

The Monegasque edged Sergio Perez's Red Bull in the first session but only his team-mate Carlos Sainz could get near him in P2, with Perez almost 0.4s second back, and world championship leader Verstappen slightly further adrift. 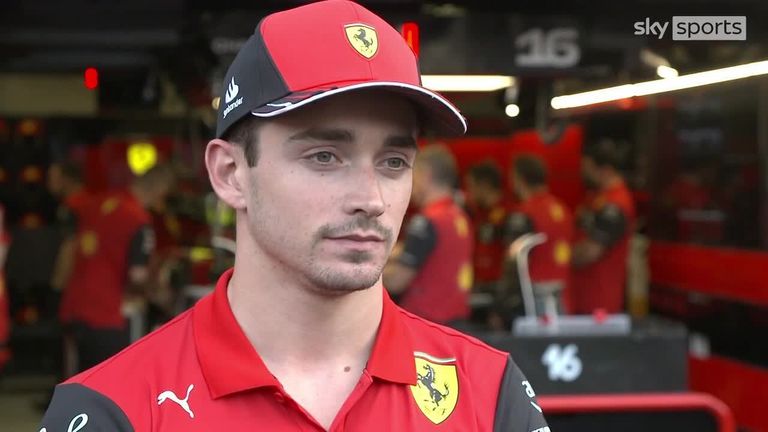 Despite his impressive performance, Leclerc is adamant that more performance will be required on Saturday, and he believes that the drivers - rather than the cars - will be responsible for extracting it.

"It was not great in FP1, a bit better in FP2," Leclerc said. "But I really think that we need to do another step forward for tomorrow because everyone has got quite a bit of margin on a Friday, and also us drivers, so it's a bit the unknown for now.

"The initial feeling is good, so hopefully we can do the step that we want to do from today to tomorrow and have a great weekend from that."

Leclerc is attempting to describe what has come to be known as his 'Monaco curse' with the 24-year-old having failed to finish in all three of his home GPs in F1. 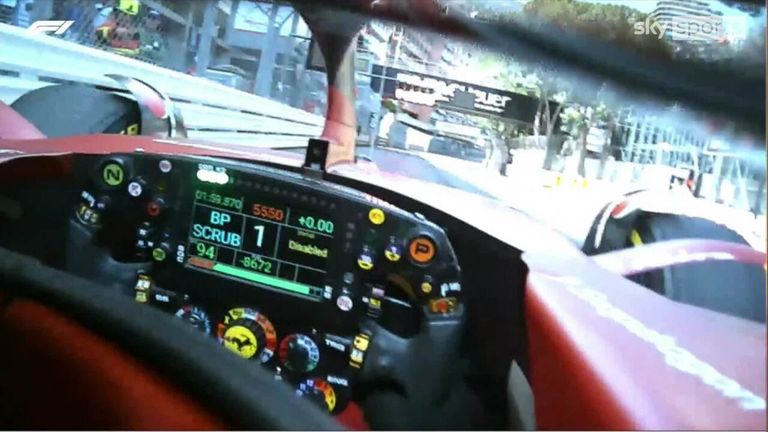 Last year he claimed pole, but a crash into the barriers at the end of Q3 saw him sustain damage to the car that would prevent him from starting the race.

Asked where improvement can be found on Saturday, Leclerc said: "Overall mostly driving.

"Driving I took it step by step, for now it's all going well, but once you put the last step in that's where the risks are becoming higher, and this we will only do in qualifying tomorrow."

In contrast, Verstappen was more pleased with the way his car performed in the first session and accepts that improvement will be required if he's to add to a streak of three successive victories that have seen him leapfrog Leclerc in the title race. 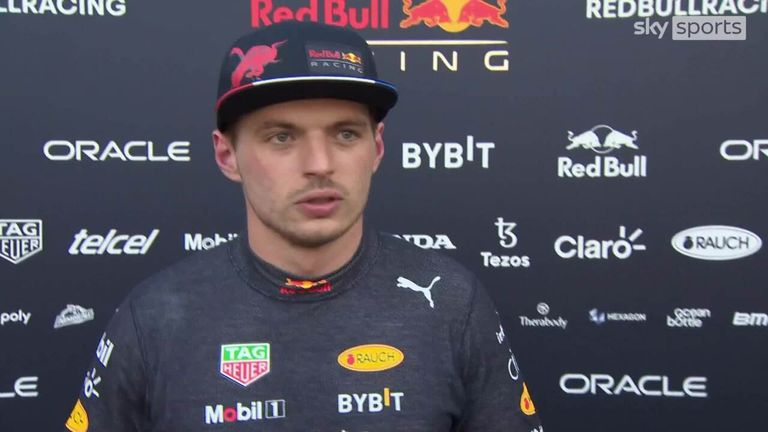 "I think overall we've been trying a few things around the aero unit to see how the car was behaving," Verstappen said. "I think I was a little happier in FP1 than FP2."

"If you have a little bit of a better balance you can attack a little bit more and then of course your lap time comes out a bit better.

"Clearly compared to Ferrari we have to find a little bit more, now it's just all about trying to fine tune my balance as well."

While Verstappen kept his poker face, Perez admitted Red Bull had been taken aback by Ferrari's advantage in P2.

"We were surprised," the Mexican said. "We were expecting a bit of a gap but not such a gap. So (there is) plenty of work to do."