Lucas Digne: Aston Villa complete signing of Everton left-back in deal worth up to £25m 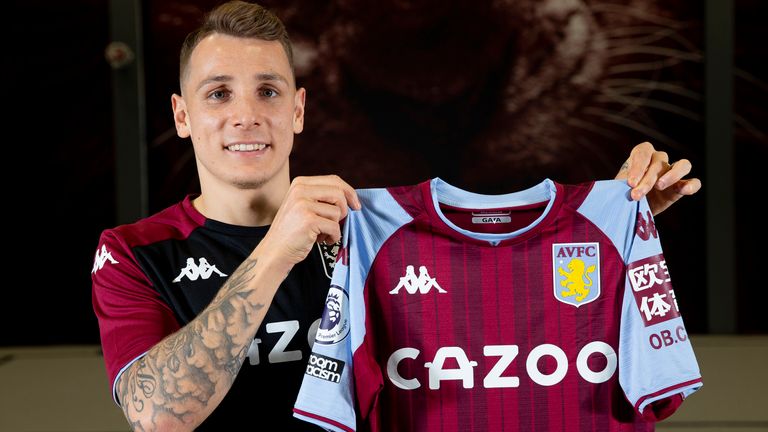 Aston Villa have signed Everton left-back Lucas Digne in a deal worth up to £25m.

It follows several days of negotiations, in which Villa beat off interest from Chelsea, Newcastle and West Ham for the former Paris Saint-Germain and Barcelona defender.

Gerrard told the club's website: "When Lucas became available we jumped at the opportunity to bring him to the club.

"To sign a player of his pedigree and quality in the January window is a great addition to our squad and his arrival excites me and everyone associated with Aston Villa."

Digne says Gerrard was "the main factor" behind his decision to move to Villa.

"I came here for the manager," said Digne.

"I had a very good meeting with him, and we spoke a couple of times during this month. I feel his desire to win, to show his football as a manager - the attacking football, the possession.

Digne, who had three-and-a-half years remaining on his Everton contract, told the club he wanted to depart Goodison Park this month after falling out with manager Rafa Benitez.

Digne appeared to take a parting shot at Benitez on Wednesday night in a farewell post to Evertonians, after the Spaniard made public his desire to leave last week.

"Everything must come to an end," Digne wrote on Instagram. "I just did not expect it to end this way. What has happened and some things that was said about me in the last month has made me very sad.

"I will always carry you with me in my heart wherever I go.

"Sometimes it only takes one person from outside to destroy a beautiful love affair."

Sky Sports News had been told Everton wanted £30m for Digne, who joined from Barcelona in 2018.

Everton have already signed Ukraine international Vitaliy Mykolenko as a replacement. The Toffees also secured the services of Rangers and Scotland right-back Nathan Patterson in a deal worth £16m earlier in the January window.

So far this season, Digne has played 15 games and scored once for Everton, who are 15th in the table ahead of their clash away at Norwich on Saturday.

Even in a depreciated market during these Covid times, the £25m fee that it is believed Aston Villa have spent in recruiting one of the Premier League's most creative full-backs merely highlights the precarious state Everton find themselves in.

When more than £30m accounted for the signings of Vitalii Mykolenko and Nathan Patterson barely days into the January transfer window, supporters were encouraged by how proactive the club had been in addressing an area of weakness.

But with 19 days left of the window remaining, and even taking into consideration the bridges burned between player and manager, allowing Digne to depart for such a modest sum can only serve to highlight how much the club are still in need of balancing books - not just severing ties.

Still only 28 and with three-and-a-half years remaining on his contract, Digne is approaching his peak. With a World Cup later this year in Qatar, he was only too aware he couldn't jeopardise his place in Didier Deschamps' France squad.

In that sense, it was a no-brainer to accelerate what began as a beautiful marriage into a bitter divorce. Aston Villa are going places under Steven Gerrard, sure.

He has already shown his capabilities in improving his new side and the club have shown plenty of ambition by backing their manager in the market with the arrival of Philippe Coutinho on loan from Barcelona.

Digne's partnership with the Brazilian down the left flank is an exciting prospect, but so too was being a mainstay at Everton, playing with the likes of Richarlison and Dominic Calvert-Lewin - at least in theory. Make no mistake: had Digne enjoyed a healthy relationship with Raphael Benitez, he would still be an Everton player and a future Everton captain.

In spite of the contrasting moods at Goodison Park and Villa Park, only three points and a place separate the two clubs in the Premier League - but while Everton have a game in hand, these are two sides that appear to be heading in opposite directions. 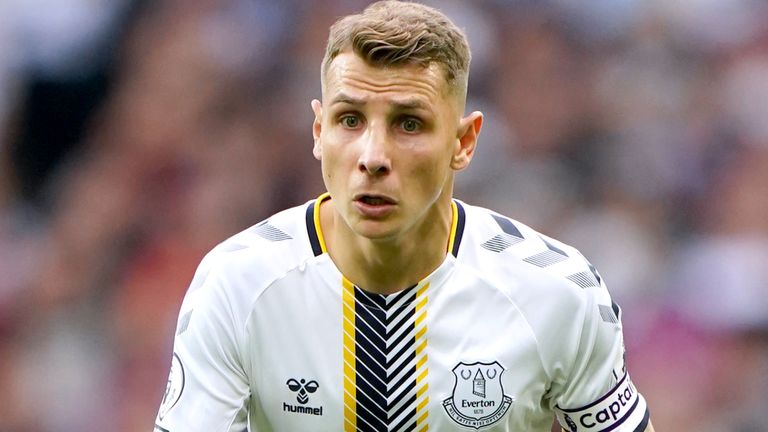 What this sorry saga leaves behind is an even more divided fanbase, who are right to question where the ongoing strategic review takes the club next.

Patterson will hopefully blossom with Seamus Coleman the perfect mentor as an experienced right-back who has been at the club for more than 13 years but at 22, Mykolenko has no senior in his position to call upon for advice at a time when he is still grasping the language and has no experience of British football.

The pressure has been increased on him as the club's apparent direct replacement for Digne to hit the ground running. But having won this particular power struggle, Benitez knows the ultimate power rests with the board.

Having been backed, the scrutiny intensifies on him to bring about results. He takes his Everton side, with one league win in their last 13 games, to Norwich this weekend. Fail to win that, and that pressure could reach a tipping point.