Match report and highlights from the All-Ireland SFC semi-final, as Tyrone stun Kerry 3-14 to 0-22. Two goals from Conor McKenna and one from Cathal McShane helped the Red Hands over the line, as they set up a final showdown with Mayo.

By Brian Barry at Croke Park

Tyrone are through to the All-Ireland final, after stunning Kerry to prevail 3-14 to 0-22 after extra-time.

The Red Hands overcame the odds, after the contest was twice postponed in recent weeks to facilitate their involvement, and delivered a vintage display to upset a fancied Kerry outfit.

Any doubts surrounding Tyrone's fitness after the Covid-19 outbreak were put to bed in the early stages, as they went toe-to-toe with the Kingdom in the physical stakes.

Brian Dooher and Feargal Logan appeared to be getting their match-ups right, with Conor Meyler greatly reducing the impact of Paudie Clifford, and Michael McKernan sitting as a spare man to curb the threats of the Kerry inside forwards.

However, they could not legislate for the brilliance of David Clifford, as the Fossa star gave Ronan McNamee all sorts of problems.

Despite the Kingdom kicking the first two points, it was the Ulster champions who enjoyed the brighter start, working their way into a 0-5 to 0-3 lead.

Seán O'Shea and Clifford pointed either side of the water break to restore parity, but Tyrone were making inroads on the counter-attack.

Kerry did have the ball in the net in the 22nd minute, with Stephen O'Brien palming it into the goal after receiving a pass from David Clifford. However, the Kenmare man was judged to have been in the square, and the score was disallowed.

Tyrone then broke up the field. Peter Harte stormed up the left wing, before playing it to Niall Sludden, who in turn picked out Conor McKenna. The former Aussie Rules star had the composure to coolly slot it past Shane Ryan.

Kerry responded brightly. O'Shea and Clifford led the line, with the latter kicking five first-half points. But Tyrone led 1-7 to 0-9 at the break, thanks to a monstrous Niall Morgan free from outside the Kerry 65. 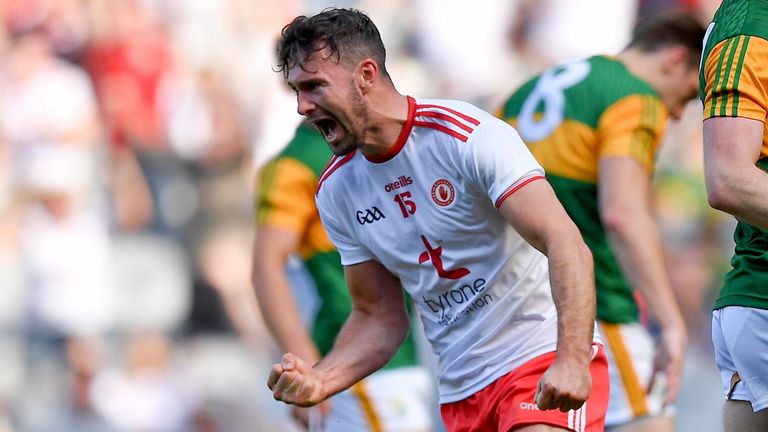 Tyrone only had two Darren McCurry frees to show for the third quarter, during which they played with 14 men for 10 minutes after Niall Sludden was shown a black card.

Darren McCurry was also sent to the sin bin in the 59th minute, shortly after making it a one-point game.

Nonetheless, Tyrone hung in there and only conceded a single point while numerically disadvantaged.

The Red Hands then made their move. Darragh Canavan stormed in on goal, and although his fierce shot was saved by Shane Ryan, Cathal McShane was on-hand to fist it home.

As the game moved into injury-time, O'Shea levelled it once again, before McCurry and David Clifford traded scores. Neither side could find a winner, and normal time ended with the score-board reading 0-17 to 2-11.

David Clifford did not emerge for extra-time, and Tyrone seized the momentum. Cathal McShane kicked two early points, before Kieran McGeary tried his luck for a point. The shot fell short, but broke back out to Conor McKenna, who planted his feet and buried it into the net.

McShane continued to lead the line impressively, kicking another score to make it 3-14 to 0-20 at half-time of extra-time.

Kerry pushed back in the second-half, with Paudie Clifford and Paul Geaney adding scores. However, try as they might, they were unable to find an equaliser. Tommy Walsh kicked a late wide, as Tyrone held out for a famous victory.