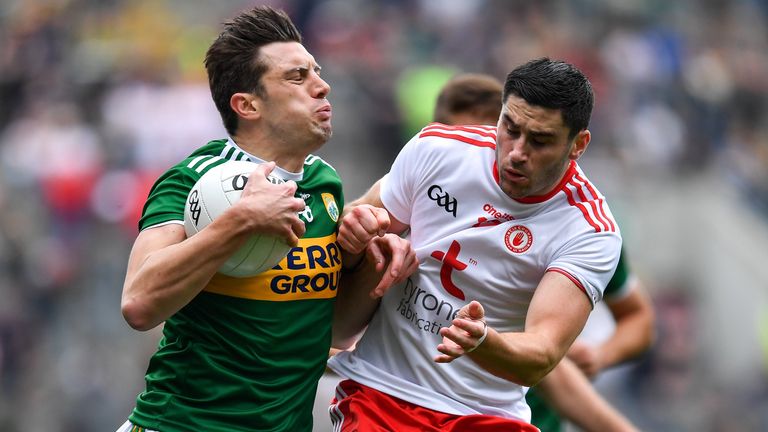 Kerry staged a second-half comeback to edge Tyrone in the All-Ireland semi-final, 1-18 to 0-18, to set up a final showdown with Dublin.

And so, the 'drive for five' will end as it began - with a Kerry-Dublin final.

The Kingdom, who were the last team to attempt the feat in 1982, now stand in the way of the GAA's first senior five-in-a-row.

The Dubs' shadow loomed large over Sunday's semi-final. As Tyrone and Kerry faced off in front of a disappointing crowd of just 33,848, there was a sense that this was a race for second place. The hollow atmosphere seemed to affect the pace of the tie in the early stages, and Jim Gavin won't have been quaking in his boots.

Nonetheless, it won't bother Peter Keane an iota, as he prepares an All-Ireland final in his first season as manager.

Throughout the week, it was speculated how the Red Hands would approach the game tactically, and it appeared that they had married their defensive approach to a direct attack with reasonable success. Colm Cavanagh was cleaning up breaks at the back as sweeper, as Cathal McShane was benefiting from long balls up the other end of the field.

Kerry were struggling to deal with the rampant full-forward, as he scored three points from play before the break, and was instrumental in all Tyrone's attacks.

David Moran's prowess in the middle of the park was one of the few positives for Kerry in the first half, as the Kingdom kicked six wides before the break.

As the teams trotted in at half-time, the Red Hands were in complete control, 0-9 to 0-5 ahead and the Kingdom had failed to raise a gallop.

A rejuvenated Kerry re-emerged for the second half. The Kingdom were clearly reinvigorated, and tore into their Ulster opposition.

Maurice Deegan awarded them a number of frees, which Seán O'Shea duly converted.

A crucial five-minute spell came at the midway point of the second-half, as Kerry scored 1-3 without reply. David Clifford cannoned the ball over the bar to level it. Seconds later, Stephen O'Brien fired into the net past Niall Morgan, and immediately the Kenmare man added another point.

Tyrone didn't know what hit them.

From there, the Munster side had all the momentum. Paul Geaney and Clifford added further scores, as they kept the Red Hands at arm's length.

Eventually, Tyrone ran out of time.

Kerry march on to the decider against Dublin, as Tyrone are left scratching their heads, wondering what might have been.

Sky Sports' GAA coverage continues next weekend as Tipperary and Kilkenny face off in the All-Ireland hurling final.