Fulfilling his first media duties since taking over as Dublin senior football manager, Dessie Farrell is asked if his new role is the easiest intercounty job in the country, or the hardest?

He smiles, then pauses before formulating a response.

He likely doesn't know the answer. How could he?

The Na Fianna man is straying into uncharted territories, taking over a team that just created history by winning five consecutive All-Ireland titles.

Should Dublin continue their dominance under his watch, many will say he merely maintained the status quo. Anything less? When you're expected to keep Sam Maguire on the Liffey-side, even second place is deemed a failure.

So is it a poisoned chalice?

Regardless, it was an opportunity he was never going to pass up.

"I've always taken the approach that there's two ways to live your life," he explains. "One, as a timid soul, sort of year by year, month by month, week by week, possibly even hour by hour, as a timid soul. Or the other is to perhaps do the things that frighten you at times.

"This thing stimulates me, it challenged me. I love football, working with footballers. Ultimately, now is the time that if I didn't do it now, it would probably never come around again."

'Moving up into the Premiership'

Farrell has experienced huge success at minor and U21 levels with Dublin in recent years, and therefore already has a working relationship with much of the current senior squad.

Nonetheless, he knows taking a senior job is a much bigger operation.

"It's something that people would say it's sort of a natural evolution having been involved with underage squads, minor teams and under-21s, that type of thing, but still you're moving up into the Premiership here for sure," he comments.

"You would have had [a relationship with the players]. Some of them I would have been a little bit closer to than others. You'd meet them out and about at events or games and different things. Then some others you'd deliberately go out of your way to meet or they would so there has been strong contact.

"They're a wonderfully committed bunch of players. What we'll try to do is establish a culture of learning and curiosity, that they continue to be students of the game and want to get better, and want to improve. If we can instil that kind of hunger in the group and motivate them in that way, who knows what's going to happen.

"One of the challenges with this group is that they've been so successful, they haven't had to endure or encounter [failure]. Success can be a lousy teacher, and there's an onus on us to be very, very vigilant around how we set ourselves up for the season ahead."

Pretenders to the throne

Farrell is well aware that the reigning champs are up there to be shot at, and the chasing pack will come again.

"[I'm] looking forward to establish that there will need to be improvement in this squad and in our performances in 2020," he continued.

"The competition out there is getting better and getting stronger.

"The trajectory that Kerry are on, they're coming with a full deck, and coming in a big way.

"Cork put Dublin to the pin of their collar for a long time in that game last year.

"Connacht - new management in Galway, Mayo - we know what Mayo have been doing and they've been knocking on the door.

"And, then, up north, I'm very familiar with that young Donegal side from underage football and, obviously, Tyrone are Tyrone. 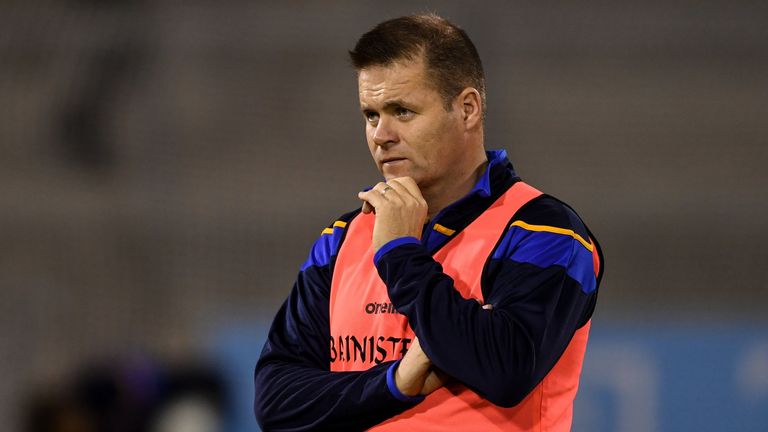 Farrell is conscious of the challenges they will face

The 1995 All-Ireland winner will be keen to hit the ground running when they face Kerry in the National League opener in two weeks' time.

But if there is a slow start, pressure could mount.

"I'm under no illusions there, but my approach is very simple in relation to that - we're all in this together," he noted. "I've been appointed by the county board now, so for better or for worse, I am who they've got, and between us we've got to make this work

"We've been very fortunate in Dublin because I vividly remember the barren years and there was many, many of those. That shouldn't be lost on supporters. I'll be reminding players of that from time to time. That thing is precious. It can move away from you very, very quickly. And once it's gone it may be very hard to get back so there is an onus on us all now at this stage to be acutely aware of that."

Dublin get their 2020 campaign underway on Saturday afternoon away to Longford in the O'Byrne Cup. Will it be a year of further glory? Or a departure from their recent dominance?

Either way, it will be worth tuning in for. Over to you, Dessie.