Many in the Dublin camp were relieved after last September's drawn All-Ireland final with Kerry, as the Sky Blues lived to fight another day.

None more-so than Jonny Cooper. The Na Fianna club man was shown a red card in the first half, and had to watch from the sidelines as his team-mates battled to a 1-16 to 1-16 draw with the Kingdom.

The fall-out from his dismissal was a testing period.

"Yeah, it was tough," he reflected.

"It's not about me at the end of the day but at the same time, when something happens to you, you're trying to then filter that out. 'Okay, what's the facts of the situation? Do you deserve to be there? Yeah. Do the lads still have an opportunity in terms of the remainder of the game? Yeah, of course they did.'

"Those very, very small things I could control in that instance. You're trying to influence."

Having got caught fouling David Clifford twice, he was shown two yellow cards by referee David Gough. The 30-year-old knows he had nobody else to blame, and vowed going forward that he needs to do more homework on the forwards he'll be marking. 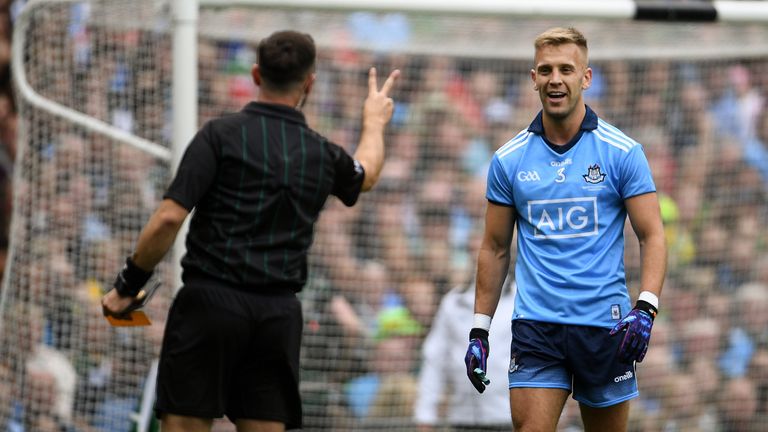 "I just think I need to do more training, do more focused training and be more disciplined around my efforts," he noted.

"Be more mindful when I see Dean Rock kicking 100 balls, maybe I'm not doing the same in my own field in terms of challenging myself. There's lots of other small things, but you get what you deserve in my opinion, and if I do the necessary work and the necessary research, I'll have an opportunity. I won't necessarily be right but I'll have an opportunity so that's probably the main thing. "

Cooper looks to take setbacks in his stride, learning from his mistakes, on and off the field.

"I've always got what I deserved," he explains. "Whether that's a failure, not getting [enough] points in the Leaving Cert or whether it's a sending off in an All-Ireland final. My opinion is I've always got what I deserved. It's important to reflect on those moments, go back into the eye of the storm, as difficult as it can be, and reflect, get feedback and take the facts out of the situation, use the facts and the feeling and move on."

Of course, he made amends two weeks later helping the Dubs secure the five-in-a-row.

Months have passed, and Cooper is ready for intercounty action once again. He is yet to feature in 2020, having been granted a longer break by new manager Dessie Farrell.

"I just waited for a little longer this year with my own holiday," he explained. "So I have taken a few extra days to get myself right. I hadn't done any training since the club was knocked out so I've come back a little slower this year. Hopefully in the next block of games I will be available for selection.

"My hand is up at the moment, the other lads have three games and a number of other sessions under their belts so whether I'll be at the level in terms of the minutes and the physical ability, that remains to be seen. But certainly pushing, and asking questions of others."

Dublin's next assignment is a home fixture with Donegal in the National League, and Cooper will be gunning to use all of his experience to improve once again in the coming year.