The Tailteann Cup has been postponed until 2021

By Brian Barry, at Croke Park

The GAA has confirmed the formats for the 2020 All-Ireland Championships, with the finals to take place in December.

Approved by the association's management committee on Thursday night, the fixtures plan will see intercounty action run from October through to December. Taking the views of the GPA into account, management in Croke Park decided to hold the championships in the calendar year.

All matches will need to be finished on the day. With no room for replays, extra-time and penalties will be needed to decide matches that end in the draw. This will include All-Ireland finals.

Meanwhile, there will be no provincial and All-Ireland Club Championships.

In Gaelic football, there will be a knockout championship for the first time in 20 years. Despite calls from the GPA, the provincial championships have been retained. However, there will be no safety net for teams who are defeated.

The All-Ireland semi-final draw is pre-determined, with the Leinster champions facing off against the Ulster winners. The Connacht champions play the Munster winners.

New York will not be involved in the championship, while London's participation will depend on travel restrictions.

The Tailteann Cup (which is the new second tier tournament) has been postponed until 2021.

The final two rounds of the 2020 National Football League will also take place in October, offering counties competitive preparation for the championship. However, there will be no finals in the tournaments.

In the small ball, the round-robin formats in the Munster and Leinster Championships have been discarded for the year. Instead, there will be a format broadly similar to the one used up until 2017, with qualifiers in place for those who lose in the provincial championship.

The Munster and Leinster draws will take place on Friday evening.

Meanwhile, the Joe McDonagh Cup will remain a round-robin competition, but there will be no entry to the Liam MacCarthy Cup for the winners. However, the decider of the second tier tournament will be held as a curtain-raiser for the All-Ireland senior final.

The Christy Ring and Nicky Rackard Cups will be straight knockout. The Lory Meagher Cup will run as normal.

Limerick have been declared National Hurling League Division 1A champions, and Clare Division 1B champions. Should the Munster neighbours meet in the championship, it will double up as a league final. Should they not meet this year, the record books will show that they shared the title.

The decision to run all competitions off by Christmas was underlined by a desire for a semblance of normality to resume in 2021.

"The big thing is we're keeping an eye on 2021 as well. So if you went into January, February with your championships, it causes mayhem for 2021," explained Feargal McGill, the GAA's director of player, club & games administration. 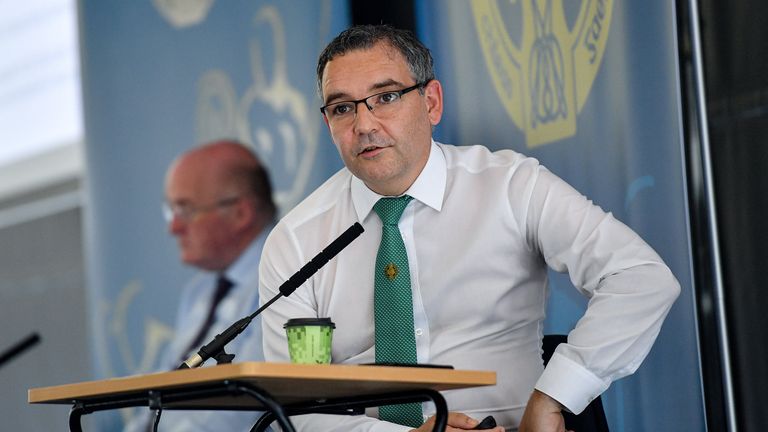 The GAA want to minimise the impact on next year's calendar

"I suppose we wanted to minimise the damage, for want of a better word, that Covid has done to the GAA and done to our fixtures. It's like pulling off a plaster, get it done as quickly as you can and try to get back to normal as soon as you can.

"We will be coming back obviously with a 2021 Master Fixtures Plan later in the year and I think it'll make more sense then as to why we did what we did. We're still probably going to have to compromise a bit around the 2021 calendar.

"But if you went into January and February, you have to build in a rest period after the All-Ireland finals are over. So really if you're talking about playing an All-Ireland final in February you're talking about not being able to restart until March or April and the knock-on effect of that would obviously be a negative one for clubs. So that was at the centre of our thinking as well."