Sarah Rowe is clearly making quite the impression Down Under, as the 25-year-old recently signed with Collingwood to return for a third season as a professional Australian Rules player.

Combining AFL while playing intercounty Gaelic football with Mayo makes it an even trickier balancing act.

But with so much unclear about 2021 due to coronavirus disruptions, Rowe feels that Aussie Rules offered her certainty that wasn't on offer in Ireland.

"I think with the all the information I had placed in front of me, the one thing that was stable for me was that the AFL have said the season will go ahead as per [usual]," she said on Inside The Game.

"Re: the GAA, it was like 'we don't know when next season's league will start'. Will we go back into pre-season in January? Or will it be the club football first, then county?

"There was so much unknown, that I had the information from the AFL that it helped my decision. It helped me reassure myself that going forward that I had some sort of plan. Like that, life and everything is so subject to change at the moment that I won't believe that I'm back in Australia until I actually land on Australian soil.

"But for now, you're focusing on short-term, thinking Mayo until it comes a time that I have to get on a flight and go to Australia."

She feels such a opportunity cannot be passed up.

"I believe that there's so much opportunity there for Irish girls at the minute," she added.

"Covid has put a bit of a stop on that at the moment...but when life slowly starts to filter back to the way it was before, there'll be so many opportunities for Irish girls. Every Irish girl who has gone over, has done extremely well and fit into the system quite quickly."

And aspects of the Aussie Rules game can improve her Gaelic football.

"But I think physically, I would explain it as the AFL girls are probably physically stronger, but the GAA girls seem to be endurance-wise fitter and faster on their feet, and quicker off the mark. Both can learn a bit from each other in that way.

"We could get stronger. That's a big focus. Every year I'm trying to get stronger because the running ability is there from GAA." 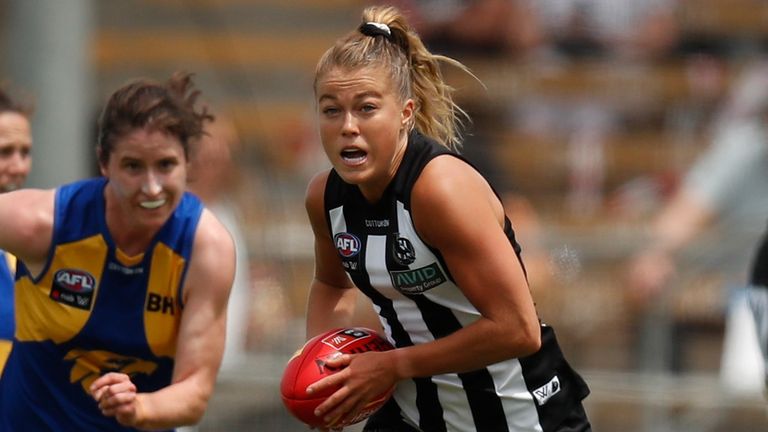 Every year I'm trying to get stronger because the running ability is there from GAA.

Rowe is striving to improve her game

Mayo manager Peter Leahy has been outspoken on the subject of players balancing Gaelic football with AFL, and questioned its feasibility. But he has struck a balance with Rowe, who is back in the westerners' squad for the upcoming championship.

"I think the open lines of communication is the most important thing here," said Rowe.

"I have to understand as a player that managers and coaches have to coach, and they have to do what they think is best for the team. My job is to play, as a player. I resect that, and make sure our lines of communication are open. As both Peter and I said, we don't know what's going to happen with next season.

"So we both decided collectively and as a group that it was the best decision for me going forward. We'll deal with things that come along, because we can't plan for the future as of yet."

Watch Inside The Game every at 9pm every Wednesday on Sky Sports Arena. You can catch up on this week's episode on the Sky Sports YouTube channel.