Cooper: "When it's all on the line, you know, you tend to get a little bit more of a rawness to it"

Jonny Cooper says he is relishing a do-or-die nature of the upcoming knockout All-Ireland Championship.

After intercounty squads returned to training last week, full focus turns to the race for the Sam Maguire, and the Dublin defender is looking forward to the must-win scenarios.

"What I like about it is there's no safety net," said Cooper.

"You've often seen any championship or any sport in general when it's all on the line, you know, you tend to get a little bit more of a rawness to it sometimes so I'm certainly looking forward to that.

"You could be knocked out the first day and that could be the end of that unfortunately but I'm looking forward to it. I think it's a great format. I don't know how many weeks potentially for a championship, is it eight weeks or nine weeks or something like that. As players you're rifling through games as quick as possible, it could obviously go against you with injuries and so on but no, I'm really looking forward to it myself." 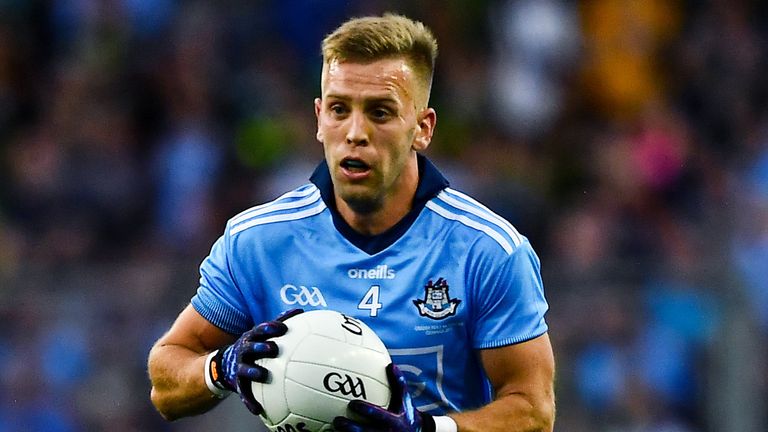 When it's all on the line, you tend to get a little bit more of a rawness to it.

And the 2020 championship brings with it several other challenges, including the wintertime schedule.

"The temperature is the first thing that jumps out," Cooper said. "After that, there isn't a massive amount that jumps out. You still have to do your due diligence and your work and preparation and all that type of things.

And returning to intercounty training last week has been a refreshing experience for the Na Fianna man.

"It's been a bit like being a kid again. Running onto the pitch and enjoying the football for what it is. I haven't seen some of those lads for weeks or months," he said.

"We have some training to get under our belts. We've a few weeks to get up to speed but I think everyone is in the same boat."

Of course, there are changes in personnel in the Dublin set-up after lockdown, after Jack McCaffrey and selector Paul Clarke walked away.

"Different things come up. You have to respect different people and where they're at and why different decision have to be made that are largely outside my and our control as players," commented Cooper.

"[I'm] wishing them very well. But also very thankful for having made the connection and who knows, maybe somewhere down the road, it might be made again."

Intercounty management now begins in earnest for Dessie Farrell, who is facing into his first championship at the helm. After the National League was cut short earlier in the year, Cooper is looking forward to working with his club-mate once more.

"It's good to be back in the trenches, if you like. And stick the head down and start working really hard.

"There's an honest relationship there between ourselves, as needs to be in terms of feedback. There's a massive amount I'd like to grow and learn and so on and he'd be up front with his thoughts about where he would see growth in those regards.

"So that's the angle of that relationship in terms of how can we complement, how can I do my very best for the team and certain things or views or perspectives that he might have.

"Obviously he has his own ideas tactically, style of play. Which is brilliant because it sort of stops you in your tracks. Albeit it has been relatively successful the last few years, I've no doubt there is a huge amount of opportunity for growth in our space to do and be more as people and as a team.

"You put the head down and put in the graft. Unfortunately it got stopped dead when we were in a bit of a flow. But we're certainly getting to know each other better as a team and as a coaching group the last few weeks."

Watch Inside The Game every at 9pm every Wednesday on Sky Sports Arena. You can catch up on this week's episode on the Sky Sports YouTube channel.