Tyrone joint-managers Feargal Logan and Brian Dooher reflected on the difficult build-up to the All-Ireland semi-final showdown with Kerry, noting how it was a 'minor miracle' that the Red Hands prevailed.

Tyrone were widely written off before their All-Ireland semi-final with Kerry, and that was even before a Covid-19 outbreak befell the group.

Given that the majority of the panel were then forced to self-isolate, many assumed they were not going to be able to muster a performance to trouble the in-form Munster champions.

Joint-manager Feargal Logan described the victory as a 'minor miracle', outlining that any suggestions that they had sought postponements for any reason other than giving their players recovery time were wide of the mark.

"If there is any impression that there was anything but men down low with Covid, blighting us, then it is wrong. Listen, it has been a month of worry, to be perfectly honest.

"You can't coach character and resilience. And in fairness to these guys and what has gone before, to Mickey (Harte) and all, they had built up a bank of fitness and Peter Donnelly in strength and conditioning.

"Resilience is born out of adversity and, as I sit here, I sit here and say absolutely sincerely that the last month, from the week before the Ulster final, in Tyrone football has been horrendous. Of course, that brings with it a narrative, different slants are put on things and that can cause all sorts of different upset and emotion but we got back in the football vein about a week ago."

And Logan was eager to pay tribute to everybody who facilitated the Red Hands participation in the All-Ireland series.

"We were treated very fairly by the association, by Kerry and we were appreciative - more than appreciative - of all that we got when ill-health struck our camp," he outlined.

"We're more than thankful for that. If we say too much in that sense it sounds as though you're patronising.

"It's very sore [for Kerry], All-Ireland semi-finals are very sore defeats but we thank everybody that stood with us and gave us a fair go at this, because two weeks ago we were potentially out of the competition and that's the relief that I feel but I have to commend everybody, the association, Kerry and everybody that bore with us and I have to commend the Tyrone players who represented the county today with distinction." 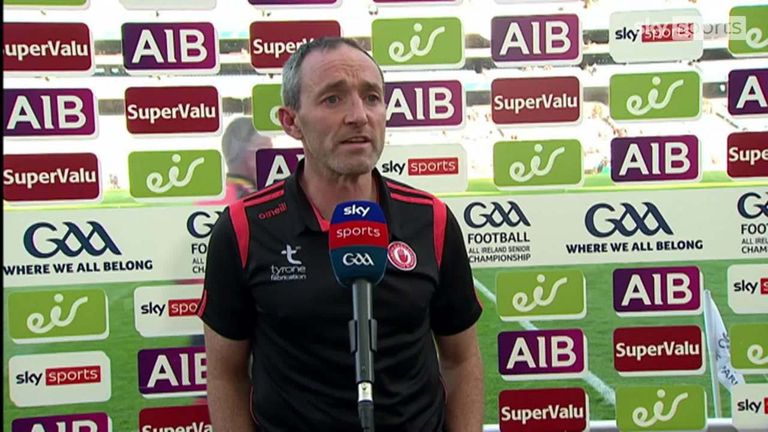 However, the post-match press conference with the victorious management team was not all jubilation, as a tetchy moment led to Brian Dooher leaving early.

The two-time All-Ireland winning captain was irked when the subject of vaccination amongst the playing group was brought up.

"If this is coming out to attack us here, which it seems to be heading that direction...we took a decision based on medical advice, and irrelevant of what happened, where we were, we took the medical advice," Dooher said.

"We weren't fit to field. We were told that. I have a duty of care to them players next door to me. People like to think, was I going to put them out and something happened to them? Fair enough, I said 'no, I'm not'. I said I'll take the hit. And we were getting [hassled] for doing this. They weren't happy that I pulled their championship on them. I don't want to get into this now.

"It wasn't a fast one. I don't want to get into this here, but if that's the way this is going, which it seems to me listening to it, I'm in the wrong place."

For now, Tyrone are back in an All-Ireland final as they chase their first Sam Maguire Cup triumph since 2008.

"When you're hanging about with Brian here, the expectations are high. And they're All-Ireland high," said Logan.

"Listen, any year is a good year [to win an All-Ireland]. What we would have said to them, or I might have said to them is 'if you dip out of this championship early, then you've another winter going what are going to do next year?' Let's just do it this year and see if we can do it. It's a happy position to be in, going into an All-Ireland final. And yes, for the first year [of the new regime], but people say the first year is the year because you get a bounce, you get all these things.

"So who knows, it's been a fairly crazy journey with lockdown and then Zoom and then starting training, and then straight into the National League which we just hung in. We took an absolute toasting down in Killarney, and we were laid bare for everybody to see. And then we went through a tight Ulster campaign, and then Brian led it on the day and we won the cup. Now we're happy to be in an All-Ireland final."