"How often have you ever seen captains take a manager up to lift the cup? He's just got such a good character, a good nature." An insight into Kilcoo's All-Ireland winning manager Mickey Moran

Mickey Moran is one of the most understated characters in Gaelic football.

The Derry native has managed five different teams in intercounty football, and his glittered CV contains vast success in both the club game and third level.

Ignoring those celebrating around him, he went straight over to console his opposite number, Kilmacud Crokes manager Robbie Brennan. Moran has lost All-Ireland finals in the past with Mayo and Kilcoo, and knows the heartache that accompanies such defeats.

"He's a brilliant GAA man, and I think he's deserving of his All-Ireland, he has a magnificent record and he's got a good crew with him there as well with Conleith [Gilligan]," Brennan said of Moran.

"They went through heartbreak themselves against Corofin and they are back here again, and more power to them, they deserved it."

When Kilcoo captain Conor Laverty climbed the steps of the Hogan Stand, he called out to Moran to join him on the podium and lift the Andy Merrigan Cup. True to form, Moran was away from the limelight on the other side of the field, and was reluctant to bask in the glory.

"He didn't want to go up at all, to be honest. But Conor wasn't doing any more until he came," said Kilcoo coach Gilligan.

"How often have you ever seen captains take a manager up to lift the cup? But the boys all knew what it meant to Mickey, even though it was never mentioned during the week.

"There was a sense that everybody knew what it meant to him. He gives so much and asks for so little, especially the older players, they just really wanted to do it for him and I know that's a cliche but it was really true as you can see from the emotion of it at the end." 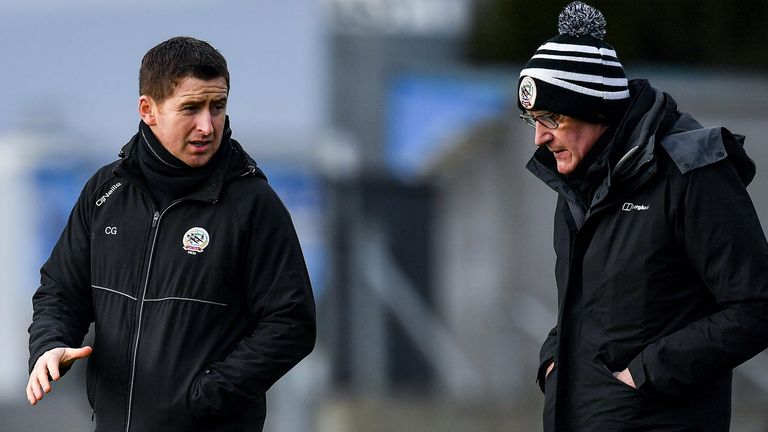 You think in sport that everybody has to be nailed on and hard and nasty all the time. Mickey throws that on his head because he's not.

Gilligan says Moran is his own man

Although the general public rarely gets an insight into Moran's character, Gilligan explains he has an infectious personality.

"The bit that people don't realise about Mickey is that he's very witty," he said.

"He's a very dry humour. Somebody will say a comment and he'll mention something and boom! Everybody will look and go, is he serious? And then they'll realise he's joking. He's got a real dry wit.

"I suppose the one thing about him is obviously his calmness. If something happens, he doesn't react. If you say something or if there's an issue, he may not speak for maybe a minute, he's just processing stuff but he's just so good with the young boys especially.

"Anybody that meets him, loves him. If Mickey Moran says bad stuff about you, it's not good. He's just got such a good character, a good nature. You think in sport that everybody has to be nailed on and hard and nasty all the time. Mickey throws that on his head because he's not.

"In changing rooms, he would never ridicule an opposition player or an opposition, everything is about his own team and performance. The one thing you would always say is that it's never personal, it's always about performance."