Goals either side of half-time from Conor Meyler and Liam Rafferty helped Tyrone past Fermanagh at Brewster Park, 2-17 to 2-10. The home side led for much of the first-half, but the Red Hands scored 1-8 without reply to seal the win.

By Brian Barry at Brewster Park 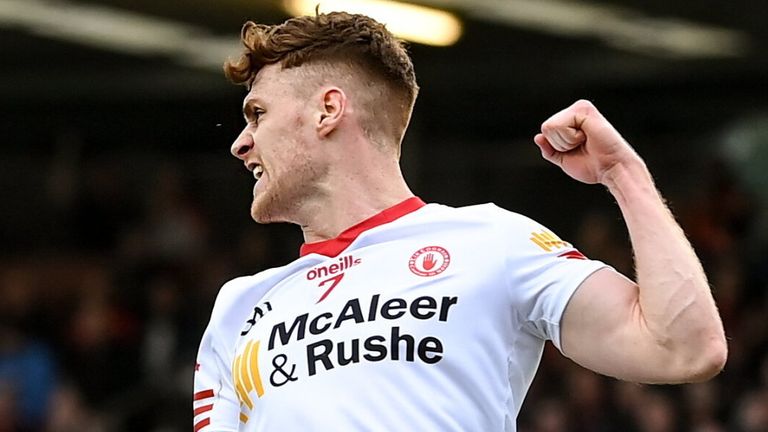 Tyrone ultimately had too much for a stern Fermanagh challenge in Enniskillen.

The All-Ireland champions were given a stern test by their hosts in front of a boisterous crowd in Brewster Park, as the home side led for much of the first half.

But Feargal Logan and Brian Dooher's side showed their class after the break, scoring 1-8 without reply, to progress to the Ulster Championship quarter-final.

However, it was not a perfect evening for the Tyrone management, as Conor McKenna was shown a straight red card late in the contest, likely ruling him out of the upcoming showdown with Derry.

Tyrone were dealt a setback right from the off, as Michael O'Neill was shown an early black card.

Things went from bad to worse for the visitors, as Fermanagh burst into a 0-5 to 0-2 lead. Sean Quigley punished the Red Hands when given opportunities, while Ryan Lyons was also deadly accurate when given a chance.

Darren McCurry kept Tyrone in touch, with two frees and a well-taken point from play.

It looked like the Erne County would lead at half-time, as they were ahead 0-7 to 0-5.

However, 2021 Footballer of the Year nominee Meyler took matters into his own hands. He stormed in from the left, muscled his way through the Fermanagh defence and punted it into the net.

Lyons did respond with a point from play, but a Cathal McShane score saw Tyrone lead at the break, 1-6 to 0-8.

A fierce Darragh McGurn shot levelled the tie shortly after the restart, but from there Tyrone took control.

The Red Hands scored 1-8 without reply. Their second major came through Liam Rafferty, who was on hand to bundle the ball home after Conor McKenna's initial shot came off the post.

From there, the damage was done for Fermanagh. Despite late goals from Josh Largo Ellis and Conall Jones, they were unable to reel in their hosts.

The game did end on a negative note for Tyrone, however. A melee broke out late on, resulting in a straight red card for McKenna, meaning the former Australian Rules star will now likely miss the Ulster Championship quarter-final against Derry.

While the Red Hands prepare for a showdown with the Oak Leaf County, Fermanagh's interest in the Sam Maguire Cup is over for 2022. Kieran Donnelly's side will now regroup ahead of the Tailteann Cup.