Match report and highlights from the All-Ireland Senior Football Championship qualifier between Mayo and Monaghan; a first-half penalty from Cillian O'Connor set the Connacht side on their way as they prevailed by four points. 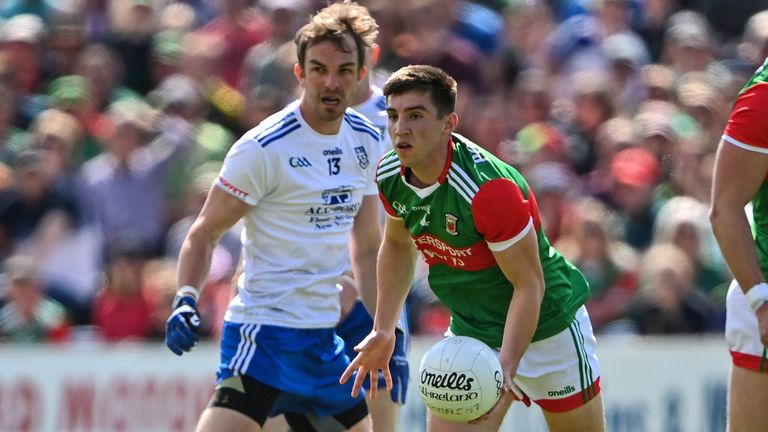 Mayo are back up and running in the All-Ireland Championship with a 1-13 to 0-12 victory over Monaghan in Castlebar.

Neither Division 1 side produced their best form, but in typical Mayo fashion their survival instincts in the qualifiers kicked in, as they ran out deserving winners.

The Westerners are through to the second round of the back door, where they will face one of the defeated provincial finalists.

Monaghan made a flying start, with successive Gary Mohan points helping them into a 0-2 to 0-0 lead.

Their momentum was stalled, however, when Conor McManus was shown a black card. Over the following 10 minutes, Mayo scored 1-3 without reply.

The goal came through a Cillian O'Connor penalty, after Dessie Ward was called for a foot-block on Oisin Mullin.

The Farney County needed a reply, and it was Jack McCarron who led the charge. The Currin clubman kicked three points before the break, to drag Seamus McEnaney's charges back into contention, as they trailed 1-7 to 0-7 at the interval.

The Ulster side would have been happy with the margin, given that Mayo did the majority of the running in the first half.

The second half was sloppy for long periods, with both sides spurning opportunities.

Cillian O'Connor opened the scoring after the restart, but Mayo then went 21 minutes without sending the umpires moving for a flag.

However, Monaghan were unable to capitalise, as they registered just a single point during that period. Lee Keegan eventually ended the drought in the 57th minute with an inspirational score as Mayo remained in the lead.

Monaghan badly needed a goal to close the gap, and had two penalty claims waved away by Barry Cassidy.

Firstly, Sean Jones' shot was blocked by the leg of Stephen Coen, but it was judged that there was too great a distance between the players for it to be deemed a foot-block.

In added time, Conor Leonard fell to the ground with Lee Keegan's arms around the Monaghan forward in the square, but once again their pleas fell on deaf ears.

Late on, Paddy Durcan kicked the insurance point for the Westerners, as they moved four ahead and ultimately held out for the hard-fought win.