Quaid: "During the call I asked for a specific reason for my dismissal, but I didn't get much clarity to be honest."

Former Westmeath manager Joe Quaid has expressed his shock and bemusement at being released from the role of county senior hurling manager this week.

Just months after helping the team reach Division 1 hurling for the first time in 32 years - and only weeks after leading the midland side to a Joe McDonagh Cup final appearance at Croke Park - Limerick-man Quaid was told by the county board earlier this week that he was no longer wanted as Westmeath manager.

He says the news came totally out of the blue.

"I'm still trying to get my head around it," he said. "I waited until they released a statement to see exactly why I have been released but having read it I am none the wiser still.

"It became clear as the call went on that I wouldn't be coming back. I just couldn't believe it. I still can't. I was only in the job one season and brought the team to three finals in that time. We won two of those finals.

"Sure, we lost the McDonagh Cup final to Laois, but they have since shown just how good they are."

In the All-Ireland preliminary quarter-final defeat to Cork, Westmeath shipped 1-40 and Quaid came in for criticism locally for playing two sweepers.

"The flip side of that is we scored 0-20 and I only had one sweeper engaged for 16 minutes. Our plan was to get as many shots for scores away as we could. We achieved that as we also hit 17 wides," he added.

"We created as many chances as Kilkenny did against Cork but, obviously, we conceded far more. This was a learning curve for both players and management who would be facing teams of that calibre in the 2020 Division One league campaign.

"During the call I asked for a specific reason for my dismissal, but I didn't get much clarity to be honest. 'Cultural differences' were mentioned. I have no idea what that means.

"Is it because I - and many of my backroom - are from Limerick and have brought a winning mentality with us?

"I asked for a meeting and a chance to talk to the board but that wasn't forthcoming either."

This came after three years with Kildare, where he won Kehoe and Christy Ring Cup titles.

He had instant success with Westmeath - winning the Kehoe Cup and guiding the county to a Division 2A title and back to Division 1 hurling.

That success was the latest in a long line of victories that Quaid has overseen as manager.

He took over the Limerick U16 team in 2010 and won an All-Ireland title in 2013, beating Galway in the final - their only success at that grade.

Later that year, Quaid took charge of the Limerick intermediate camogie team and guided them to a National League Division 2 title.

In 2014, his team lined out in a second successive All-Ireland Intermediate Championship final and beat Kilkenny to land the title and promotion to the All-Ireland senior championship.

On Wednesday night, his association with Westmeath officially came to an end.

A county board statement read: "we will not be renewing our association with Joe Quaid as senior hurling manager for the forthcoming season."

The statement acknowledged the former All Star goalkeeper's achievements, including the "wonderful Joe McDonagh Cup campaign" as well as their Kehoe Cup win earlier in the year. 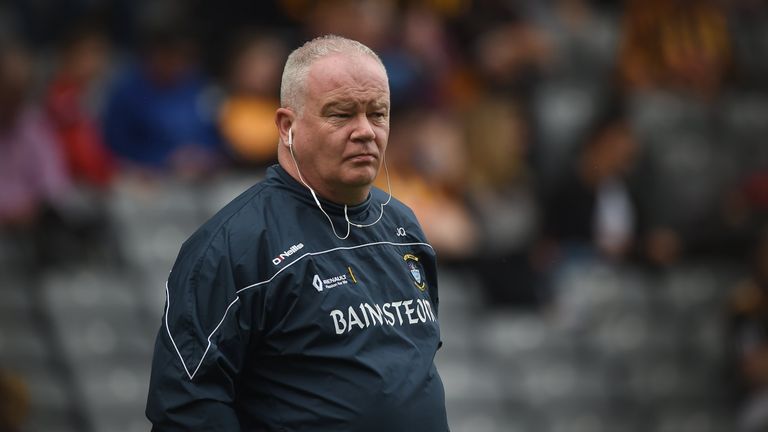 "My vision for the side is obviously different to theirs. It was a progressive plan, I had some hard calls to make during the year, and maybe not everyone was able to buy into it."

Quaid was shocked by the decision

Quaid says he was already planning for 2020 and their bid to win the McDonagh Cup when the call to move him on came.

"I would have felt I had done enough over the course of the year to be able to actually meet them and find out what their issues really were," he said.

"My vision for the side is obviously different to theirs. It was a progressive plan, I had some hard calls to make during the year, and maybe not everyone was able to buy into it.

"Although we lost the McDonagh Cup final to Laois, we had a fine league promotion in Spring and had a great Division 2A final win over Kerry in Ennis.

"The lads are now back playing top-flight hurling next season in Group One and I am so proud of that. I wish them every success next year.

"While I am shocked at the way things have worked out, I just want to thank my own backroom team of winners for helping the team.

"Brendan Murtagh and Johnny Greville two proud Westmeath men were by my side from day one, Shane O'Brien is a top-class coach and I have a strong Limerick spine to my management - Willie Banks as goalkeeping coach, Adrian O'Sullivan a team coach and Mike Flynn as performance analyst.

"This might be the end of our time with Westmeath but as a group we have achieved a fair bit over the years, and we have a huge hunger to keep doing that.

"As for myself and my team, we know there are bigger things in life to worry about. We have perspective. This is disappointing but life moves on and we will bounce back better than ever."