Brick: "The reason why I started playing was to win an All-Ireland final and [we] just weren't good enough to do it."

2020 is the first time since 2002 that Waterford will face into a season without Michael 'Brick' Walsh among their ranks.

The Stradbally club man was there through thick and thin for the Déise, featuring in two All-Ireland finals and winning three Munster titles. Throughout the reigns of Justin McCarthy, Davy Fitzgerald, Michael Ryan, Derek McGrath and Paraic Fanning, 'Brick' was always one of the first names on the team sheet.

But after 17 seasons of pulling on the county jersey during which he played a record 76 championship games, the 36-year-old slipped away quietly into retirement without any announcement.

"I'm just not a big media man or anything like that. I prefer to slip in under the radar as much as possible," he explained.

"I was very lucky to get as long as I did out of it and I'm happy to be looking on now from the outside.

"I knew when I finished up last year that I was finished."

After so long living in the intercounty bubble, it may be strange in the coming months as he looks on from the stands.

"I suppose it won't really hit probably until the evenings get longer and things like that. I've a few young children and I'm kept going with them at the moment," he continued.

"You move on and you can miss it all you want but you have to realise that it's gone from you and off you go.

"Looking back on it, I will miss it. If you take a snapshot of your life at a specific time, a lot of those players I've spent four more times a week than I would meet my own family at home.

"You do miss that and the camaraderie that brings. I suppose I knew it was time to go so it wasn't that bad in that regard. And you move on. You don't want to be looking back or too much involved with the players because they're trying to keep everything in-house from their point of view."

Walsh enjoyed a glittered career, during which he was recognised for individual brilliance with four All-Star awards, but the disappointment of never getting his hands on the Liam MacCarthy Cup will endure.

"The reason why I started playing was to win an All-Ireland final and [we] just weren't good enough to do it," he lamented.

"There's no point saying 'ifs', 'buts' or anything like that. We just didn't and we weren't good enough. That'll always be a disappointment for me. That's why I would have started off, with the hope of winning it and putting it in to win an All-Ireland but unfortunately we didn't. 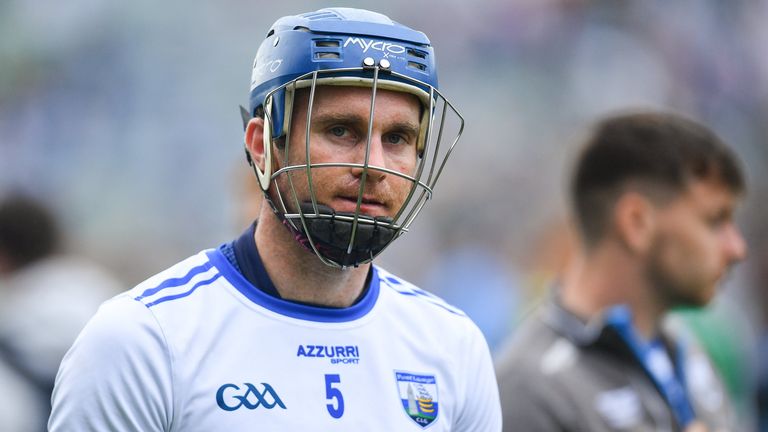 That'll always be a disappointment for me.

Walsh holds every honour in the game bar a Celtic Cross

"But look we had a lot of good times. The Munster finals were fantastic. The 2004 and 2010 ones were nice. I actually forgot about the league, that was the most recent medal I got with the county in '15. That was great.

"But there were a lot of games you would have enjoyed and winning those hard fought games. As a fella said to us years ago and it always stuck with me, the ten minutes after winning a game - that's what it's all about."

Of course, one unique legacy the Déise legend leaves in the sport is the art of a one-handed strike of the sliotar with the stick, commonly dubbed the 'Brick Flick'.

But what was the genesis of him incorporating the skill into his game?

"I was probably an average hurler in terms of technical ability and all of that side of things," he recounted. "From my point of view, why that started was probably a lack of hurling. It's probably over-emphasised a bit at the moment.

"I would have used a lot to get out of trouble, but probably from a lack of hurling. It stuck - someone was very good at rhyming back in the day!"

As the Déise move into the Liam Cahill era, much has been made of high profile departures from the squad.

But few have left as great an impact in their county careers as Michael 'Brick' Walsh. It's certainly the end of an era in Waterford.